Helena Andrews-Dyer and Shilpi Malinowski for THE MAMAS 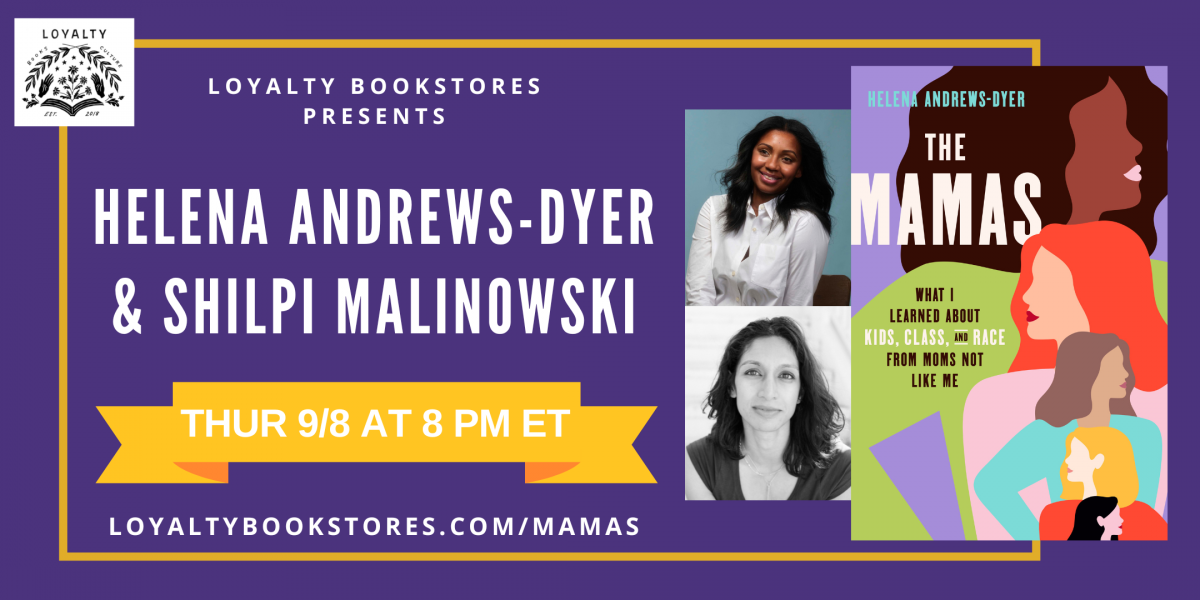 Loyalty can't wait to host Helena Andrews-Dyer and Shilpi Malinowski in celebration of Helena's new book, The Mamas: What I Learned about Kids, Class, and Race from Moms Not Like Me! This event will be held digitally via Crowdcast. Click here to register for the event with a donation of any amount of your choice. You can also order the book below to be automatically added to the event's registration list. Donations will go to the Trans Women of Color Collective. There will also be an option to snag the book during the event.

Can white moms and Black moms ever truly be friends? Not just mom friends, but like really real friends? And does it matter?

Helena Andrews-Dyer lives in a “hot” Washington, D.C., neighborhood, which means picturesque row houses and plenty of gentrification. After having her first child, she joined the local mom group—“the Mamas”—and quickly realized that being one of the only Black mothers in the mix was a mixed bag. The racial, cultural, and socioeconomic differences were made clear almost immediately. But spending time in what she calls “the Polly Pocket world of postracial parenting” was a welcome reprieve. Then George Floyd happened. A man was murdered, a man who called out for his mama. And suddenly, the Mamas hit different. Though they were alike in some ways—they want their kids to be safe; they think their husbands are lazy; they work too much and feel guilty about it—Andrews-Dyer realized she had an entirely different set of problems that her neighborhood mom friends could never truly understand.

In The Mamas, Andrews-Dyer chronicles the particular challenges she faces in a group where systemic racism can be solved with an Excel spreadsheet and where she, a Black, professional, Ivy League–educated mom, is overcompensating with every move. Andrews-Dyer grapples with her own inner tensions, like “Why do I never leave the house with the baby and without my wedding ring?” and “Why did every name we considered for our kids have to pass the résumé test?” Throw in a global pandemic and a nationwide movement for social justice, and Andrews-Dyer ultimately tries to find out if moms from different backgrounds can truly understand one another.

With sharp wit and refreshing honesty, The Mamas explores the contradictions and community of motherhood—white and Black and everything—against the backdrop of the rapidly changing world.

Helena Andrews-Dyer is a senior culture writer at The Washington Post. She is the author of Reclaiming Her Time as well as Bitch Is the New Black, which was optioned by Shonda Rhimes. Her work has appeared in O: The Oprah Magazine, Marie Claire, Glamour, and The New York Times, among other publications. Andrews-Dyer has appeared on ABC’s Nightline, CBS’s This Morning, CNN, MSNBC, SiriusXM, NPR, and NY1. She lives in Washington, D.C.

Shilpi Malinowski is a journalist, oral historian, mother and D.C. resident whose writing has been published in The Washington Post, The New York Times and India Abroad. Her first book, Shaw, LeDroit Park and Bloomingdale in Washington, D.C.: An Oral History, tells the story of 70 years in D.C.’s most gentrified neighborhood through reporting, oral history and photography. She is a 2022 Fellow with the D.C. Commission on the Arts and Humanities.

The Mamas: What I Learned About Kids, Class, and Race from Moms Not Like Me (Hardcover)