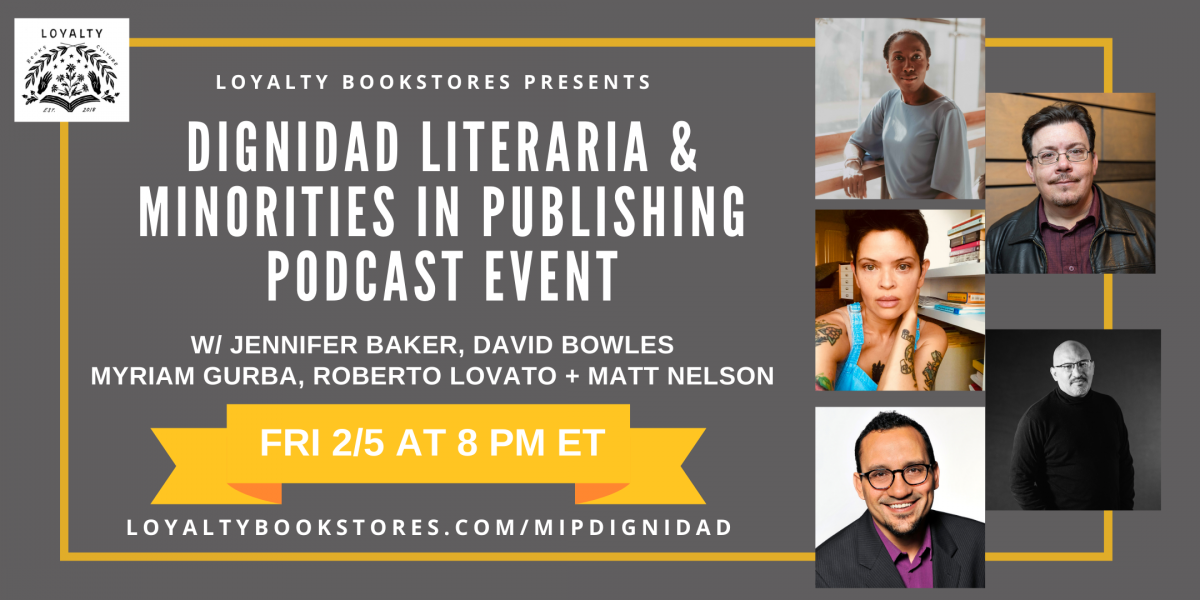 Loyalty is honored to host an anniversary event for Dignidad Literaria in conversation with Minorities in Publishing Podcast. This will be a fascinationg conversation about the publishing industry and what actions we've seen in the past year from publishers to requests made, and more. There will also be a book giveaway for attendees thanks to MiP! Click here to rsvp for the event. This event is free to attend but we are encouraging donations to Presente.org, who supports Dignidad Literaria.

Jennifer Baker is a publishing professional of almost 20 years, creator/host of the Minorities in Publishing podcast, and faculty member of the MFA program in creative nonfiction at Bay Path University. In 2019, she was named Publishers Weekly Superstar for her contributions to inclusion and representation in publishing. Jennifer is also the editor of the BIPOC-short story anthology Everyday People: The Color of Life (Atria Books, 2018) and the author of the forthcoming novel Forgive Me Not (Putnam BFYR, 2022). Her fiction, nonfiction, and criticism has appeared in various print and online publications. Her website is: jennifernbaker.com.

David Bowles is a Mexican-American author and translator from south Texas, where he teaches at the University of Texas Río Grande Valley. He has written several award-winning titles, most notably The Smoking Mirror and They Call Me Güero. His work has also been published in multiple anthologies, plus venues such as The New York Times, Strange Horizons, Apex Magazine, School Library Journal, Rattle, Translation Review, and the Journal of Children’s Literature. Additionally, David has worked on several TV/film projects, including Victor and Valentino (Cartoon Network), the Moctezuma & Cortés miniseries (Amazon/Amblin) and Monsters and Mysteries in America (Discovery). In 2017, David was inducted into the Texas Institute of Letters. He now serves on its governing council. In 2019, he co-founded the hashtag and activist movement #DignidadLiteraria, which has negotiated greater Latinx representation in publishing.

Myriam Gurba is a writer and artist. She is the author of the true-crime memoir Mean, a New York Times editors’ choice. O, the Oprah Magazine, ranked Mean as one of the best LGBTQ books of all time. Publishers’ Weekly describes Gurba as having a voice like no other. Her essays and criticism have appeared in the Paris Review, TIME.com, and 4Columns. She has shown art in galleries, museums, and community centers. She lives in Long Beach, California, with herself.

Roberto Lovato is the author of Unforgetting: A Memoir of Family, Migration, Gangs and Revolution in the Americas (Harper Collins), a  New York Times “Editor’s Choice” that the paper also hailed as a “powerful” nonfiction book and a “groundbreaking memoir.” Newsweek listed Lovato’s memoir as a “must read” 2020 book and the Los Angeles Times listed it as one of its 20 Best Books of 2020. Lovato is also an educator, journalist and writer based at The Writers Grotto in San Francisco, California. A recipient of a reporting grant from the Pulitzer Center, Lovato has reported on numerous issues—violence, terrorism, the drug war and the refugee crisis—from Mexico, Venezuela, El Salvador, Dominican Republic, Haiti, France and the United States, among other countries.

Matt Nelson is the Colombian-born, Midwestern-raised Executive Director of Presente.org—the nation’s largest online Latinx organizing group; advancing social justice with technology, media, and culture. Matt also served as the Organizing Director at ColorOfChange.org and has co-founded several cooperative enterprises in multiple Midwestern cities. He is a long-serving community organizer and campaign strategist who was featured in the first major book on the Ferguson Uprising, “Ferguson is America: Roots of Rebellion”. He contributed to the book, “Welcome to the Revolution: Universalizing Resistance for Social Justice and Democracy in Perilous Times”, and is an editor of the recently released book: “Turnout! Mobilizing Voters in an Emergency” (Routledge 2020) EmergencyElection.org. He is currently finishing a new book on how Latinx organizing and cultural power is reshaping U.S. politics to be released later this year (Routledge 2021).

They Call Me Güero: A Border Kid's Poems (Paperback)

Unforgetting: A Memoir of Family, Migration, Gangs, and Revolution in the Americas (Hardcover)