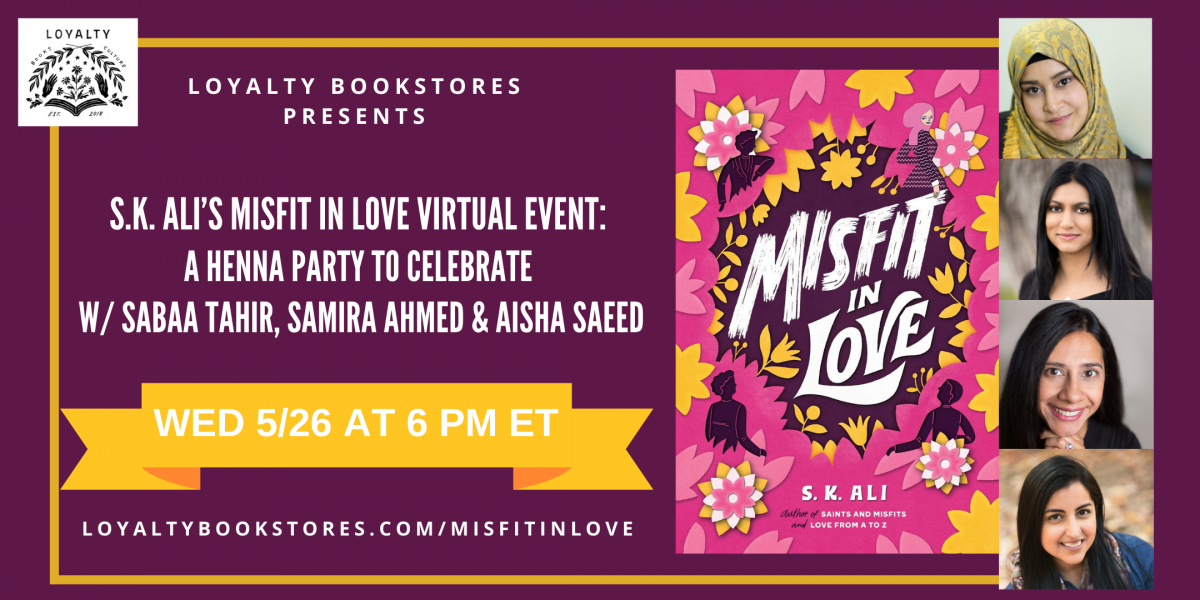 Loyalty is so excited to welcome S.K. Ali in convo w/ Sabaa Tahir, Samira Ahmed & Aisha Saeed. Join us for this not to be missed Henna Party to celebrate Misfit In Love! This event is free to attend and will be held digitally via Crowdcast. Click here to register for the event. You can also order a copy of Misfit In Love below to be automatically added to the registration list, and there will be an option to get the book during the event.

In this fun and fresh sequel to Saints and Misfits, Janna hopes her brother’s wedding will be the perfect start to her own summer of love, but attractive new arrivals have her more confused than ever.

Janna Yusuf is so excited for the weekend: her brother Muhammad’s getting married, and she’s reuniting with her mom, whom she’s missed the whole summer. And Nuah’s arriving for the weekend too. Sweet, constant Nuah. The last time she saw him, Janna wasn’t ready to reciprocate his feelings for her. But things are different now. She’s finished high school, ready for college…and ready for Nuah. It’s time for Janna’s (carefully planned) summer of love to begin—starting right at the wedding.

But it wouldn’t be a wedding if everything went according to plan. Muhammad’s party choices aren’t in line with his fiancée’s taste at all, Janna’s dad is acting strange, and her mom is spending more time with an old friend (and maybe love interest?) than Janna. And Nuah’s treating her differently. Just when things couldn’t get more complicated, two newcomers—the dreamy Haytham and brooding Layth—have Janna more confused than ever about what her misfit heart really wants.

Janna’s summer of love is turning out to be super crowded and painfully unpredictable.

S. K. Ali is a New York Times bestselling and award-winning author of several critically acclaimed books, including Saints and Misfits, and the just released, Misfit in Love. Her novel, Love from A to Z, was the first teen title chosen as an NBC Today Show’s “Read with Jenna” Book Club selection. She has a degree in Creative Writing and lives in Toronto with her family, which includes a very vocal cat named Yeti.

Sabaa Tahir is the #1 New York Times bestselling author of the An Ember in the Ashes series, which has been translated into over thirty-five languages. She grew up in California’s Mojave Desert at her family’s eighteen-room motel. There, she spent her time devouring fantasy novels, raiding her brother’s comic book stash, and playing guitar badly. She began writing An Ember in the Ashes while working nights as a newspaper editor. She likes thunderous indie rock, garish socks, and all things nerd.

Aisha Saeed is the New York Times bestselling author of books for young people. Her books include the critically acclaimed Amal Unbound and Yes No Maybe So (co-authored by Becky Albertalli), the picture book Bilal Cooks Daal (recipient of the 2019 APALA honor), and Written In The Stars (winner of the California Medal for young people). Her works have received multiple starred reviews and praise from outlets from The New York Times, Washington Post, Entertainment Weekly and have been named among the best books of the year from many different places including Kirkus, Publisher’s Weekly, School Library Journal, Booklist, and more.

Samira Ahmed is the New York Times bestselling author of Love, Hate & Other Filters; Internment; Mad, Bad & Dangerous to Know and the forthcoming Amira & Hamza: The War to Save the Worlds. She was born in Bombay, India, and grew up in Batavia, Illinois, in a house that smelled like fried onions, spices, and potpourri. A graduate of the University of Chicago, Samira has taught high school English in both the suburbs of Chicago and New York City, worked in education non-profits, and spent time on the road for political campaigns. You can find her online at www.samiraahmed.com. Twitter & Instagram: @ sam_aye_ahm