Jocelyn Nicole Johnson and Carolyn Ferrell for MY MONTICELLO 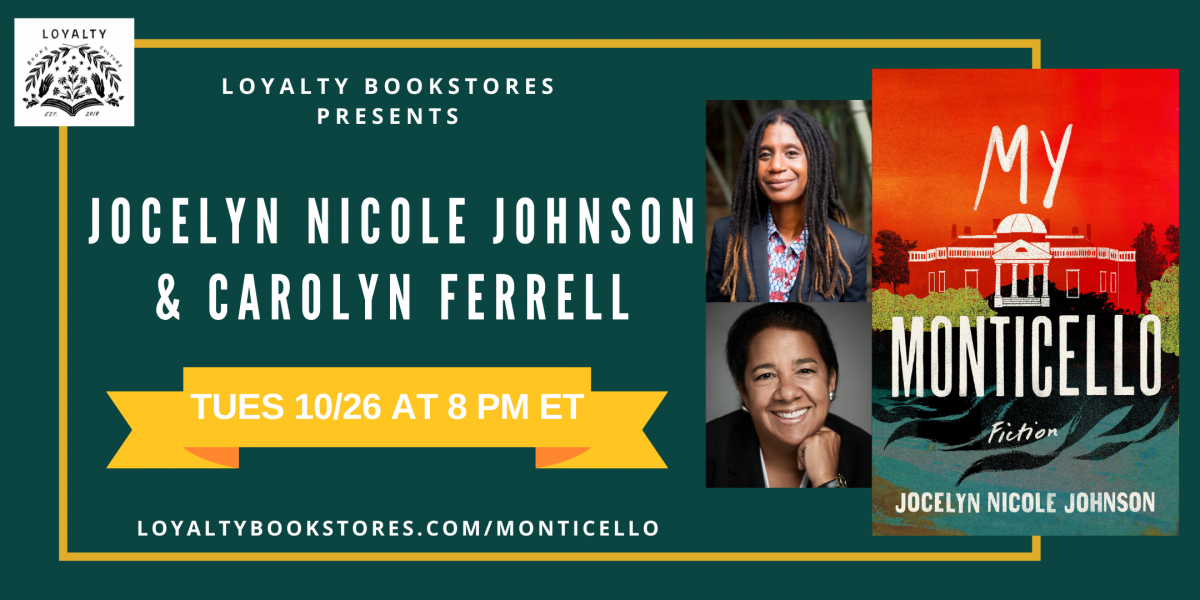 Loyalty is so excited to celebrate My Monticello with Jocelyn Nicole Johnson and Carolyn Ferrell! This event will be held digitally via Crowdcast. Click here to register for the event with a donation of any amount of your choice or you can order the book below to be added to the event's registration list. Donations will go to BLM DC. There will also be an option to snag the book during the event.

“A badass debut by any measure—nimble, knowing, and electrifying.”
—Colson Whitehead, Pulitzer Prize-winning author of The Nickel Boys and Harlem Shuffle

A young woman descended from Thomas Jefferson and Sally Hemings driven from her neighborhood by a white militia. A university professor studying racism by conducting a secret social experiment on his own son. A single mother desperate to buy her first home even as the world hurtles toward catastrophe. Each fighting to survive in America.

Tough-minded, vulnerable, and brave, Jocelyn Nicole Johnson’s precisely imagined debut explores burdened inheritances and extraordinary pursuits of belonging. Set in the near future, the eponymous novella, “My Monticello,” tells of a diverse group of Charlottesville neighbors fleeing violent white supremacists. Led by Da’Naisha, a young Black descendant of Thomas Jefferson and Sally Hemings, they seek refuge in Jefferson’s historic plantation home in a desperate attempt to outlive the long-foretold racial and environmental unravelling within the nation.

In “Control Negro,” hailed by Roxane Gay as “one hell of story,” a university professor devotes himself to the study of racism and the development of ACMs (average American Caucasian males) by clinically observing his own son from birth in order to “painstakingly mark the route of this Black child too, one whom I could prove was so strikingly decent and true that America could not find fault in him unless we as a nation had projected it there.” Johnson’s characters all seek out home as a place and an internal state, whether in the form of a Nigerian widower who immigrates to a meager existence in the city of Alexandria, finding himself adrift; a young mixed-race woman who adopts a new tongue and name to escape the landscapes of rural Virginia and her family; or a single mother who seeks salvation through “Buying a House Ahead of the Apocalypse.”

United by these characters’ relentless struggles against reality and fate, My Monticello is a formidable book that bears witness to this country’s legacies and announces the arrival of a wildly original new voice in American fiction.

Carolyn Ferrell is the author of the short-story collection, Don’t Erase Me, which was awarded the Art Seidenbaum Award of the Los Angeles Times Book Prize program, the John C. Zacharis Award given by Ploughshares, and the Quality Paperback Book Prize for First Fiction. She has also received grants from the Fulbright Association, German Academic Exchange (DAAD), City University of New York MAGNET Program, and National Endowment for the Arts. Ferrell’s stories have been anthologized in Best American Short Stories 2018 and The Best American Short Stories of the Century, among other places. She teaches writing at Sarah Lawrence College and lives in New York with her husband and children.