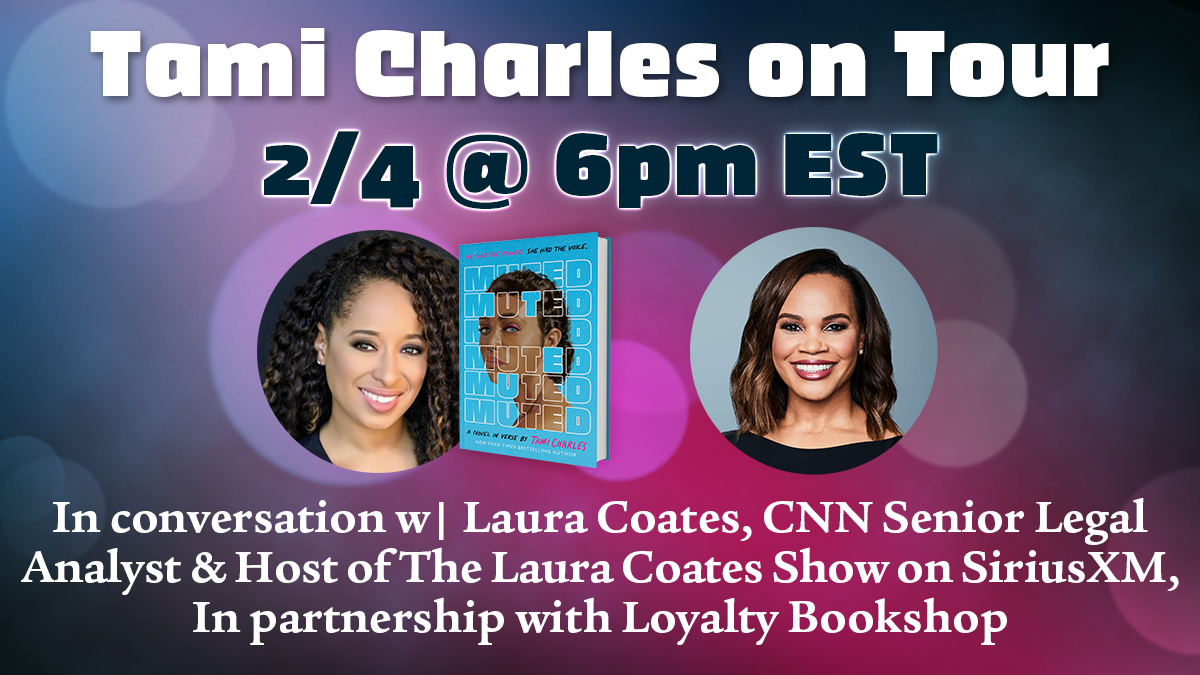 Join New York Times bestselling author Tami Charles in-conversation with CNN Senior Legal Analyst and SiriusXM Host Laura Coates to celebrate the recent release Tami’s novel MUTED! Loyalty is excited to partner with Scholastic for this event! Stream the event on Scholastic's I Read YA YouTube here: https://www.youtube.com/watch?v=auQAjFj3g5M You can order the book on our website for a signed copy (while supplies last!) and be entered for a chance to win an exclusive MUTED swag box, that includes a finished copy of MUTED, a branded Bluetooth speaker, and cassette wallet.

A ripped-from-the-headlines novel of ambition, music, and innocence lost, perfect for fans of Elizabeth Acevedo and Jason Reynolds!

Be bold. Get seen. Be Heard.

For seventeen-year-old Denver, music is everything. Writing, performing, and her ultimate goal: escaping her very small, very white hometown.

So Denver is more than ready on the day she and her best friends Dali and Shak sing their way into the orbit of the biggest R&B star in the world, Sean "Mercury" Ellis. Merc gives them everything: parties, perks, wild nights -- plus hours and hours in the recording studio. Even the painful sacrifices and the lies the girls have to tell are all worth it.

Denver begins to realize that she's trapped in Merc's world, struggling to hold on to her own voice. As the dream turns into a nightmare, she must make a choice: lose her big break, or get broken.

Inspired by true events, Muted is a fearless exploration of the dark side of the music industry, the business of exploitation, how a girl's dreams can be used against her -- and what it takes to fight back.

Tami Charles is the New York Times bestselling author of numerous books for young readers, including the picture book All Because You Matter (illustrated by Bryan Collier) and the novels Like Vanessa and Becoming Beatriz. In her teens and early twenties, Tami enjoyed a taste of fame as a member of an all-girl R&B trio. They performed for Boyz II Men, BET, and Showtime at the Apollo, and had a one-hit wonder on the radio. After college, Tami worked as an educator for thirteen years before pursuing her childhood dream of becoming an author. For more information on Tami and Muted, visit tamiwrites.com and mutedbook.tumblr.com.

Laura Coates, CNN Senior Legal Analyst and SiriusXM Host, is a well-respected attorney, commentator, author, and adjunct professor at the George Washington University School of Law. Coates' depth of experience and broad expertise has earned her acclaim across all media platforms.

At CNN, Coates played a central role in the network's programming surrounding the impeachment trial of President Donald Trump, including hosting a special entitled "White House in Crisis: The Impeachment Inquiry." In June 2020, Coates made fundamental contributions to the coverage of the unrest in Minneapolis and the protests around the world following George Floyd's death. During this national reckoning on race, she moderated "Mayors Who Matter: A CNN Town Hall on Race and Covid-19" with four female African American mayors on the front lines. Coates also regularly serves as fill-in anchor for CNN's Don Lemon, conducting prominent interviews and informing viewers in primetime.

In 2017, she launched the daily eponymous talk show, "The Laura Coates Show," on SiriusXM where she engages the audience with a lively discussion on the intersections of politics, law, and pop culture.

Recognizing the dire need for increased police accountability and improved police-community relations, she wrote the bestselling 2016 book, You Have the Right: A Constitutional Guide to Policing the Police. In the book, Laura removes the legalese and helps ordinary citizens know and understand their 4th, 5th and 6th Amendment rights.

A native of Saint Paul, Minnesota, Coates graduated from Princeton University's Woodrow Wilson School of Public and International Affairs and the University of Minnesota Law School, where she serves on the Board of Advisors, before beginning her legal career in private practice. She practiced law in Minnesota and New York handling cases ranging from intellectual property litigation and First Amendment issues to Defamation and Media law. Called to public service, she transitioned from private practice to the United States Department of Justice, thriving as a federal prosecutor. She served as a Trial Attorney in the Civil Rights Division of the Department of Justice during the Bush and Obama administrations, specializing in the enforcement of voting rights throughout the country. She also served as an Assistant United States Attorney for the District of Columbia, prosecuting a myriad of violent felony offenses including drug trafficking, armed offenses, domestic violence, child abuse, and sexual assault.

She and her husband live in Washington, DC with their two young children. You can find her on social media at @thelauracoates.