Camryn Garrett and Leah Johnson for OFF THE RECORD 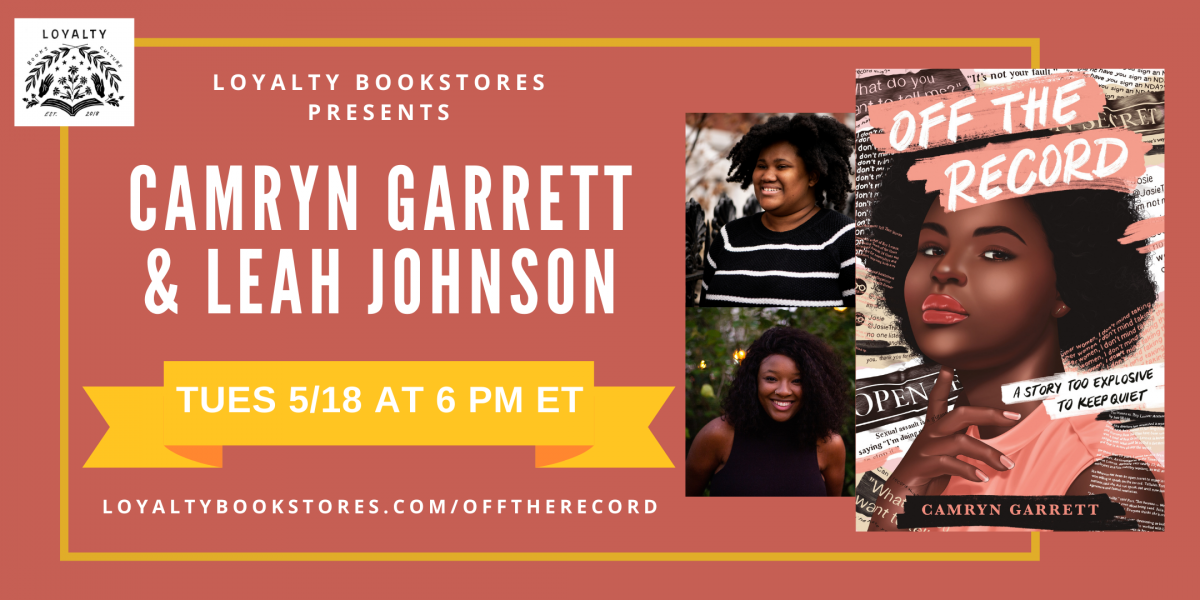 Loyalty is super psyched to welcome Camryn Garrett and Leah Johnson in conversation for Off the Record! This event is free to attend and will be held digitally via Crowdcast. Click here to register for the event. You can also order the book below to be automatically added to the registration list, and there will be an option to get the book during the event.

The behind-the-scenes access of Almost Famous meets the searing revelations of metoo in this story of a teen journalist who uncovers the scandal of the decade.

Ever since seventeen-year-old Josie Wright can remember, writing has been her identity, the thing that grounds her when everything else is a garbage fire. So when she wins a contest to write a celebrity profile for Deep Focus magazine, she's equal parts excited and scared, but also ready. She's got this.

Soon Josie is jetting off on a multi-city tour, rubbing elbows with sparkly celebrities, frenetic handlers, stone-faced producers, and eccentric stylists. She even finds herself catching feelings for the subject of her profile, dazzling young newcomer Marius Canet. Josie's world is expanding so rapidly, she doesn't know whether she's flying or falling. But when a young actress lets her in on a terrible secret, the answer is clear: she's in over her head.

One woman's account leads to another and another. Josie wants to expose the man responsible, but she's reluctant to speak up, unsure if this is her story to tell. What if she lets down the women who have entrusted her with their stories? What if this ends her writing career before it even begins? There are so many reasons not to go ahead, but if Josie doesn't step up, who will?

From the author of Full Disclosure, this is a moving testament to the MeToo movement, and all the ways women stand up for each other.

Brave, necessary, and unflinchingly real, Off the Record is an instant classic. --Marieke Nijkamp, #1 New York Times Bestselling author of This Is Where It Ends

Camryn Garrett grew up in New York and began her writing career at thirteen, when she was selected as a TIME for Kids reporter, interviewing celebrities like Warren Buffett and Kristen Bell. Since then, her writing has appeared on MTV and in the Huffington Post and Rookie magazine, and she was recently selected as one of Teen Vogue's "21 Under 21: Girls Who Are Changing the World." When she's not writing, she studies film at NYU, and she's a proud advocate for diverse stories and storytellers in any medium. Her first novel, Full Disclosure, received rave reviews from outlets such as EW, Glamour and SLJ, which said in its starred review, "Readers will fall in love." Off the Record is her second novel.

Leah Johnson is a writer, editor and eternal Midwesterner. Her bestselling debut YA novel, You Should See Me in a Crown, was the inaugural Reese’s Book Club YA Pick, and was named a best book of the year by Cosmo, Marie Claire, and Publishers Weekly, among others. When she’s not writing, you can usually find her teaching her creative writing students, or on Twitter at @byleahjohnson, ranting about pop culture and politics. Her sophomore novel, Rise to the Sun is forthcoming from Scholastic in 2021. Visit her at byleahjohnson.com

Off the Record (Hardcover)

Rise to the Sun (Hardcover)

You Should See Me in a Crown (Hardcover)