Glory Edim and Edwidge Danticat for ON GIRLHOOD 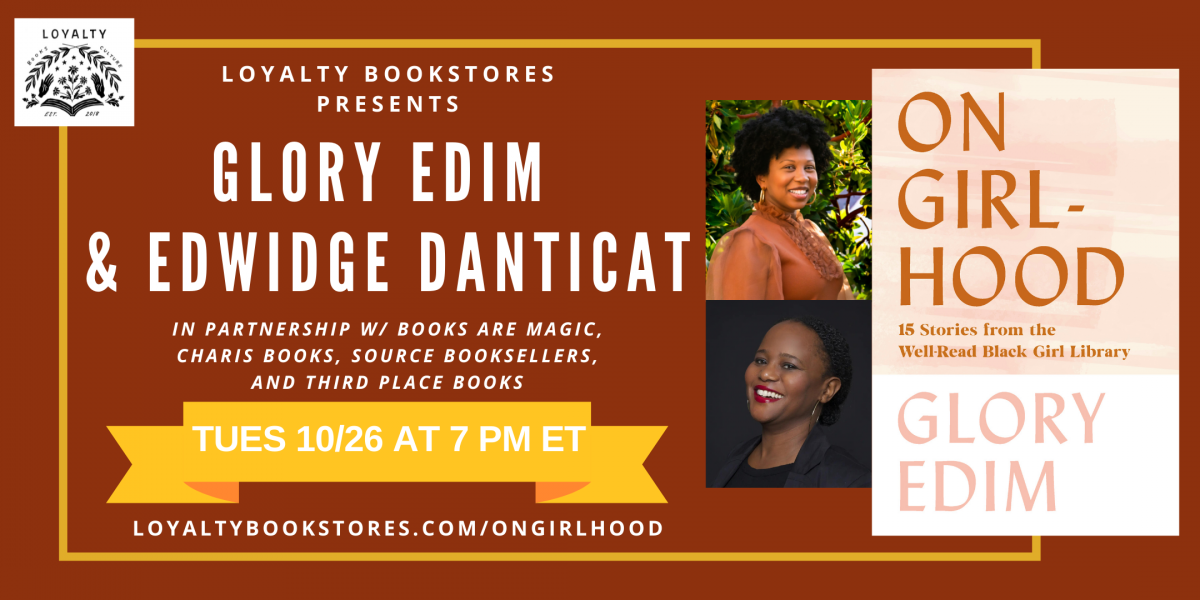 Loyalty Bookstores, Third Place Books, Books Are Magic, Source Booksellers, and Charis Books are proud to present Glory Edim, founder of the book club and digital platform Well-Read Black Girl (@wellreadblackgirl), for the release of the anthology On Girlhood: 15 Stories from the Well-Read Black Girl. She will be joined in conversation by Edwidge Danticat, MacArthur “Genius” recipient, finalist for the National Book Award, and the author of, most recently, Everything Inside: Stories. Order a copy of On Girlhood below to be added to the event's registration list, or you can email events@loyaltybookstores.com to attend the event for free. Attendees will receive the event link via email approximately 24 hours before the event. *Signed copies of On Girlhood available!*

This event will be hosted on Books Are Magic's Zoom Webinar platform.

“When you look over your own library, who do you see?” Since founding the beloved Well-Read Black Girl book club in 2015, Glory Edim has emerged as a literary tastemaker for a new generation. Continuing her life’s work to brighten and enrich American reading lives through the work of legendary Black authors, she now launches her Well-Read Black Girl Library Series with On Girlhood. This meticulously selected anthology features a wide range of unique voices, finally illuminating a distinctly robust sector of contemporary literature: groundbreaking short stories that explore the thin yet imperative line between Black girlhood and womanhood.

Divided into four themes—Innocence, Belonging, Love, and Self-Discovery—the unforgettable young protagonists within contend with the trials of coming of age that shape who they are and what they will become. With this tradition in mind, Innocence opens with Jamaica Kincaid’s searing “Girl,” in which a mother offers fierce instructions to her impressionable daughter. This deceptively simple yet profound monologue is followed by Toni Morrison’s first and only published short story, the now-canonical “Recitatif,” about two neglected girls who come together in youth only to find themselves on opposite picket lines in adulthood. In Belonging, Toni Cade Bambara’s “The Lesson” follows rambunctious students on a field trip where they are exposed to a new world of luxury. In Love, Dana Johnson’s “Melvin in the Sixth Grade” captures the yearning of a lovesick teen smitten with the only boy who looks her way. And in Self-Discovery, Edwidge Danticat’s “Seeing Things Simply” charts the creative awakening of Princesse, a young woman with a hunger to be fully seen. These inspiring tales of world builders and rule breakers conclude with Zora Neale Hurston’s “How It Feels to Be Colored Me,” a personal essay brimming with wit and strength: “When covered by the waters, I am; and the ebb but reveals me again. ”At times heartbreaking and at times hilarious, these stories boldly push past flat stereotypes and powerfully convey the beauty of Black girlhood. In bringing together an array of influential authors—past and present—whose work remains timeless, Glory Edim has created an indispensable compendium for every home library and a soul-stirring guide to coming of age.

Glory Edim is the founder of Well-Read Black Girl, a book club and digital platform that promotes Black literature and sisterhood. She won the Innovator’s Award at the 2017 Los Angeles Times Book Prizes.

On Girlhood: 15 Stories from the Well-Read Black Girl Library (Hardcover)

Everything Inside: Stories (Vintage Contemporaries) (Paperback)