Dawnie Walton and Robert Jones, Jr. for THE FINAL REVIVAL OF OPAL & NEV 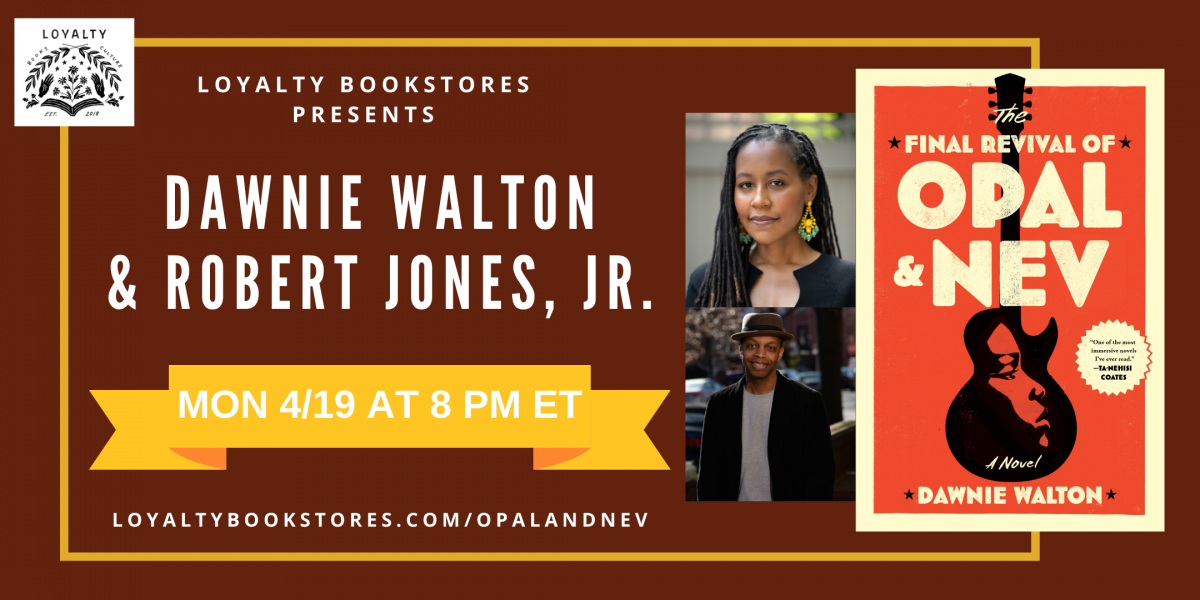 We are thrilled to welcome Dawnie Walton and Robert Jones, Jr. to celebrate the release of The Final Revival of Opal & Nev!! This event will be held digitally via Crowdcast. Click here to register for the event with a donation of any amount of your choice or you can order the book below to be added to the event's registration list. Donations will go to Black Lives Matter DC. There will also be an option to snag the book during the event.

"Dawnie Walton's The Final Revival Of Opal & Nev is one of the most immersive novels I've ever read. This is largely because of Walton's skill at letting so many people talk in so many different ways. Voices are marshalled from across America, and then across the Atlantic, and blended seamlessly into a tale about black culture, black women American capitalism. This is a thrilling work of polyphony—a first novel, that reads like the work of an old hand." — Ta-Nehisi Coates, New York Times bestselling author of The Water Dancer and Between the World and Me

A kaleidoscopic fictional oral history of the beloved rock ’n’ roll duo who shot to fame in 1970s New York, and the dark, fraught secret that lies at the peak of their stardom.

Opal is a fiercely independent young woman pushing against the grain in her style and attitude, Afro-punk before that term existed. Coming of age in Detroit, she can’t imagine settling for a 9-to-5 job—despite her unusual looks, Opal believes she can be a star. So when the aspiring British singer/songwriter Neville Charles discovers her at a bar’s amateur night, she takes him up on his offer to make rock music together for the fledgling Rivington Records.

In early seventies New York City, just as she’s finding her niche as part of a flamboyant and funky creative scene, a rival band signed to her label brandishes a Confederate flag at a promotional concert. Opal’s bold protest and the violence that ensues set off a chain of events that will not only change the lives of those she loves, but also be a deadly reminder that repercussions are always harsher for women, especially black women, who dare to speak their truth.

Decades later, as Opal considers a 2016 reunion with Nev, music journalist S. Sunny Shelton seizes the chance to curate an oral history about her idols. Sunny thought she knew most of the stories leading up to the cult duo’s most politicized chapter. But as her interviews dig deeper, a nasty new allegation from an unexpected source threatens to blow up everything.

Provocative and chilling, The Final Revival of Opal & Nev features a backup chorus of unforgettable voices, a heroine the likes of which we’ve not seen in storytelling, and a daring structure, and introduces a bold new voice in contemporary fiction.

Dawnie Walton is a fiction writer and journalist whose work explores identity, place, and the influence of pop culture. She has won fellowships from the MacDowell Colony and the Tin House Summer Workshop, and earned her MFA from the Iowa Writers’ Workshop. Previously she worked as an executive-level editor for magazine and multimedia brands including Essence, Entertainment Weekly, Getty Images, and LIFE. A native of Jacksonville, Florida, she lives with her husband in Brooklyn.

New York Times-bestselling author Robert Jones, Jr., was born and raised in New York City. He received his BFA in creative writing with honors and MFA in fiction from Brooklyn College. He has written for numerous publications, including The New York Times, The Paris Review, Essence, OkayAfrica, The Feminist Wire, and The Grio. He is the creator of the social-justice social media community Son of Baldwin. THE PROPHETS is his debut novel.