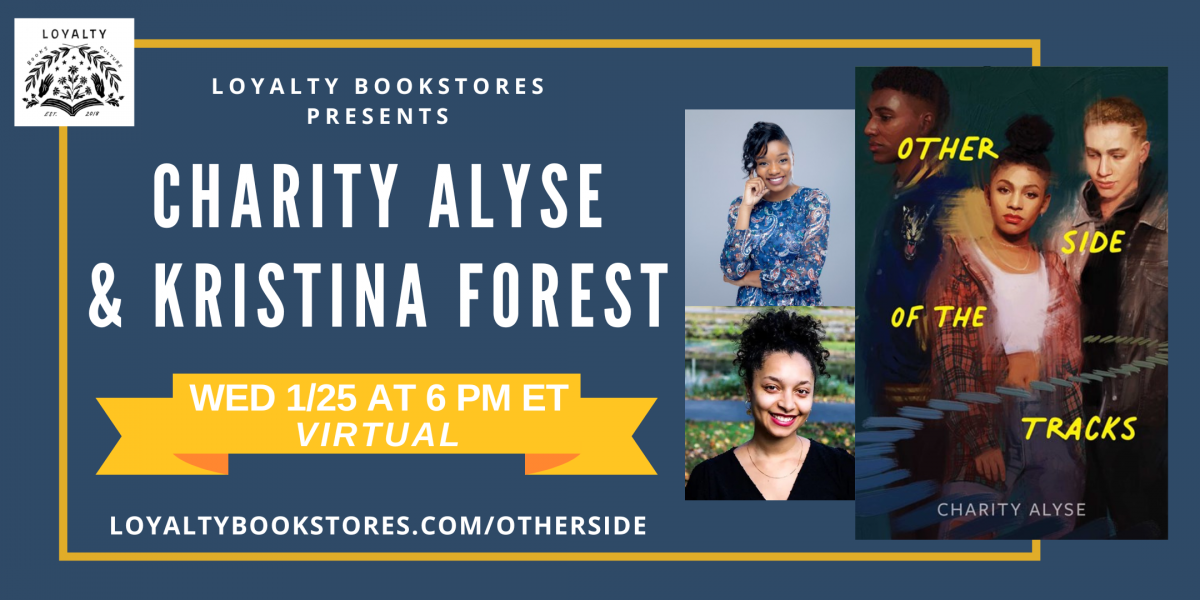 Loyalty is so excited to celebrate the recent release of Other Side of the Tracks with Charity Alyse and Kristina Forest! This event is free to attend and will be held digitally via Crowdcast. Click here to register for the event. You can also order a copy of the book below to be automatically added to the registration list, and there will be an option to snag the book during the event.

This lilting and riveting young adult debut novel about three teens entangled by secret love, open hatred, and the invisible societal constraints wrapped around people both Black and white is perfect for readers of All American Boys and The Hate U Give.

There is an unspoken agreement between the racially divided towns of Bayside and Hamilton: no one steps over the train tracks that divide them. Or else.

Not until Zach Whitman anyway, a white boy who moves in from Philly and who dreams of music. When he follows his dream across the tracks to meet his idol, the famous jazz musician who owns The Sunlight Record Shop in Hamilton, he’s flung into Capri Collins’s path.

Capri has big plans: she wants to follow her late mother’s famous footsteps, dancing her way onto Broadway, and leaving this town for good, just like her older brother, Justin, is planning to do when he goes off to college next year. As sparks fly, Zach and Capri realize that they can help each other turn hope into a reality, even if it means crossing the tracks to do it.

But one tragic night changes everything. When Justin’s friend, the star of Hamilton’s football team, is murdered by a white Bayside police officer, the long-standing feud between Bayside and Hamilton becomes an all-out war And Capri, Justin, and Zach are right in the middle of it.

Charity Alyse earned her bachelor’s degree in English literature at Rowan University and is currently working toward a master’s degree in clinical mental health therapy. Other Side of the Tracks is her first novel. Alyse lives in New Jersey. You can find her on Twitter and Instagram @Charity_Alyse and CharityAlyse.com.

Kristina Forest is the critically acclaimed author of romance books for both teens and adults, including I Wanna Be Where You Are, Now That I've Found You, and Zyla & Kai. Her adult romance debut, The Neighbor Favor, will publish with Berkley on February 28, 2023. She earned her MFA in Creative Writing at The New School and she can often be found rearranging her bookshelf.

Other Side of the Tracks (Hardcover)

ISBN: 9780593407240
Availability: Not In Store - Available to special order for pickup or ship. For even speediest shipping we suggest our Bookshop.org page!
Published: Kokila - June 7th, 2022