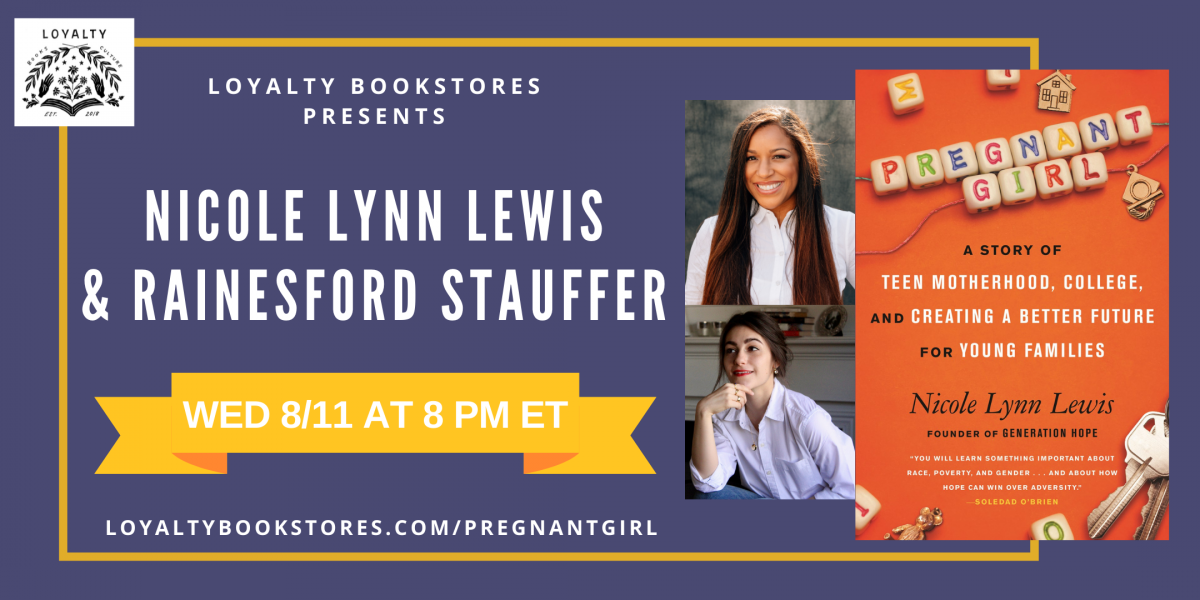 Loyalty is thrilled to welcome Nicole Lynn Lewis and Rainesford Stauffer Pregnant Girl: A Story of Teen Motherhood, College, and Creating a Better Future for Young Families! This event will be held digitally via Crowdcast. Click here to register for the event with a donation of any amount of your choice or you can order the book below to be added to the event's registration list. Donations will go to BLM DC. There will also be an option to snag the book during the event.

An activist calls for better support of young families so they can thrive and reflects on her experiences as a Black mother and college student fighting for opportunities for herself and her child.

Pregnant Girl presents the possibility of a different future for young mothers—one of success and stability—in the midst of the dismal statistics that dominate the national conversation. Along with her own story as a young Black mother, Nicole Lynn Lewis weaves in those of the men and women she’s worked with to share a new perspective on how poverty, classism, and systemic racism impact teen pregnancy and on how effective programs and equitable policies can help teen parents earn college degrees, have increased opportunity, and create a legacy of educational and career achievements in their families.

After Nicole became pregnant during her senior year in high school, she was told that college was no longer a reality—a negative outlook often unfairly presented to teen mothers. Nicole left home and experienced periods of homelessness, hunger, and poverty. Despite these obstacles, she enrolled at the College of William & Mary and brought her 3-month-old daughter along. Through her experiences fighting for resources to put herself through college, she discovered her true calling and founded her organization, Generation Hope, to provide support for teen parents and their children so they can thrive in college and kindergarten—driving a 2-generation solution to poverty.

Pregnant Girl will inspire young parents faced with similar choices and obstacles that they too can pursue their goals with the right support.

Nicole Lynn Lewis is a social entrepreneur and founder of the nonprofit Generation Hope. As a teen mother, she put herself through the College of William & Mary, starting as a freshman when her daughter was just 3 months old. She has been named a CNN Hero and won the Roslyn S. Jaffe Award. She has appeared on CNN, NBC Nightly News, Good Morning America, and many others, and her journey has been covered in the Washington Post, the Baltimore Sun, TeenVogue, the Chronicle for Higher Education, and others. Connect with her on Twitter (@NicoleLynnLewis).

Rainesford Stauffer is a freelance writer and Kentuckian. She's the author of An Ordinary Age, which was featured on Good Morning America and was Esquire's May 2021 Book Club selection. She's written for The New York Times, Teen Vogue, The Atlantic, Catapult, and Vox, among other publications. You can find her on Twitter @Rainesford.

An Ordinary Age: Finding Your Way in a World That Expects Exceptional (Paperback)