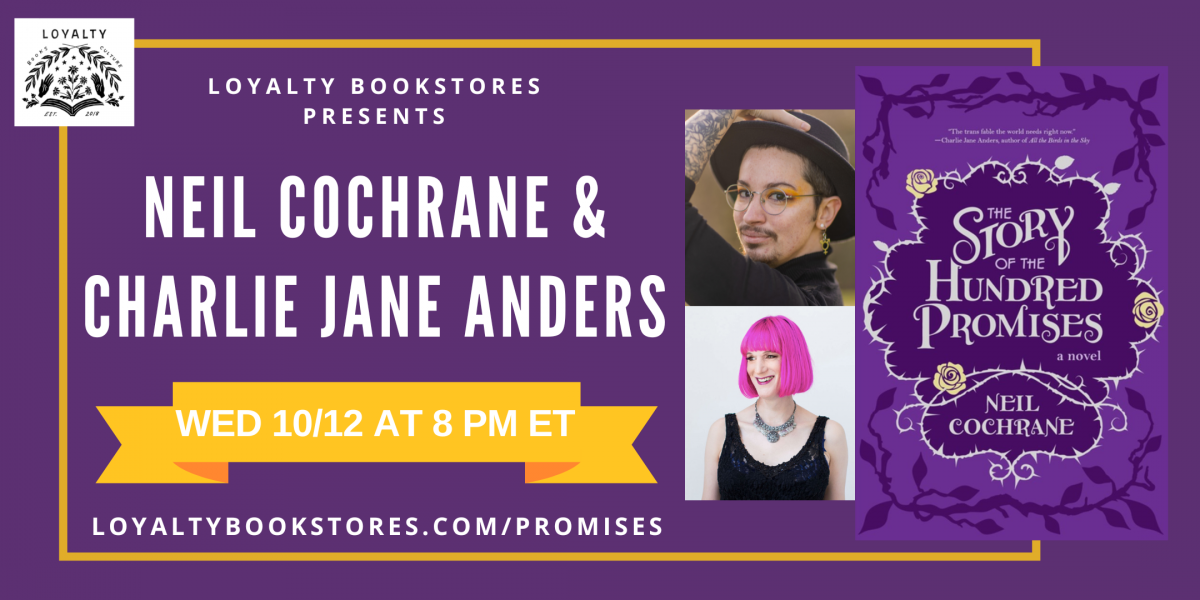 Loyalty is delighted to host Neil Cochrane and Charlie Jane Anders for a virtual event celebrating The Story of the Hundred Promises! This event will be held digitally via Crowdcast. Click here to register for the event with a donation of any amount of your choice. You can also order the book below to be automatically added to the event's registration list. Donations will go to For the Gworls. There will also be an option to snag the book during the event.

Trans sailor Darragh Thorn has made a comfortable life for himself among people who love and accept him. Ten years after his exile from home, though, his sister asks him to reconcile with their ailing father. Determined to resolve his feelings rather than just survive them, Darragh sets off on a quest to find the one person who can heal a half-dead man: the mysterious enchanter who once gave him the magic he needed to become his true self. But so far as anyone knows, no one but Darragh has seen the enchanter for a century, and the fairy tales that survive about em give more cause for fear than hope. In lush and evocative prose, and populated with magical trees and a wise fox, The Story of the Hundred Promises is a big-hearted fantasy suffused with queer optimism.

Neil Cochrane is a queer, trans author and artist living and working in Portland, Oregon, on land belonging to the Cowlitz people, the Confederated Tribes of Grand Ronde, the Clackamas people, and Confederated Tribes of Siletz Indians. He writes speculative fiction that centers queer characters overcoming obstacles and building families. He has worked in and around the publishing industry since 2012, in such various roles as editor, literary agent assistant, marketing director, and bookseller. He is represented by Michaela Whatnall of Dystel, Goderich & Bourret.

Charlie Jane Anders is the author of Victories Greater Than Death and Dreams Bigger Than Heartbreak, the first two books in a new young-adult trilogy. She's also the author of the short story collection Even Greater Mistakes, and Never Say You Can't Survive (August 2021), a book about how to use creative writing to get through hard times. Her other books include The City in the Middle of the Night and All the Birds in the Sky. She's won the Hugo, Nebula, Sturgeon, Lambda Literary, Crawford and Locus Awards. Her fiction and journalism have appeared in the New York Times, the Washington Post, Slate, McSweeney's, Mother Jones, the Boston Review, Tor.com, Tin House, Teen Vogue, Conjunctions, Wired Magazine, and other places. Her TED Talk, "Go Ahead, Dream About the Future" got 700,000 views in its first week. With Annalee Newitz, she co-hosts the podcast Our Opinions Are Correct.

The Story of the Hundred Promises (Paperback)

The City in the Middle of the Night (Paperback)