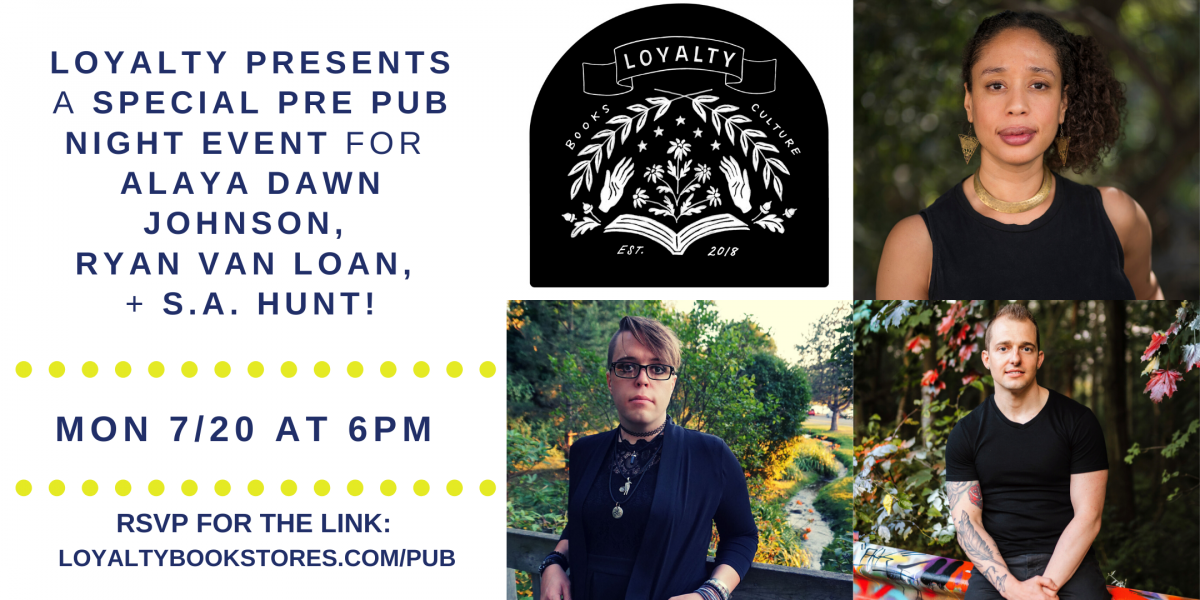 Join us to celebrate the publication of three awesome novels with three awesome people! We're going to read, cheer, and chat speculative fiction, writing, and what's getting us all through! RSVP via the ticket link below. There is a free ticket, a ticket with a donation to our local Black Lives Matter chapter in DC, and a paid ticket with a coupon code toward $20 of anything on the Loyalty website.

ALAYA DAWN JOHNSON has been recognized for her short fiction and YA novels, winning the 2015 Nebula Award for Best Novelette for “A Guide to the Fruits of Hawai’i,” which also appears in The Best American Science Fiction and Fantasy (2015), guest edited by Joe Hill. Her debut YA novel, The Summer Prince, was longlisted for the National Book Award for Young People’s Literature. Her follow up YA novel, Love Is the Drug, won the Andre Norton Award in 2015. A native of Washington, D.C., Johnson is currently based in Mexico City, where she received a masters degree in Mesoamerican studies and sings in a blues band.

RYAN VAN LOAN served six years in the US Army Infantry, on the front lines of Afghanistan. He now works in healthcare innovation. The Sin in the Steel is his debut novel. Van Loan and his wife live in Pennsylvania.

S. A. HUNT is the author of the Malus Domestica horror-action series from Tor Books, beginning with Burn the Dark (Jan 2020). In 2014, she won Reddit's /r/Fantasy "Independent Novel of the Year" Stabby Award for her Outlaw King fantasy gunslinger series. She is an Afghanistan veteran (OEF 2010), a coffee enthusiast, a fervent bicyclist, and she currently lives in Petoskey, Michigan.

Trouble the Saints: A Novel (Hardcover)