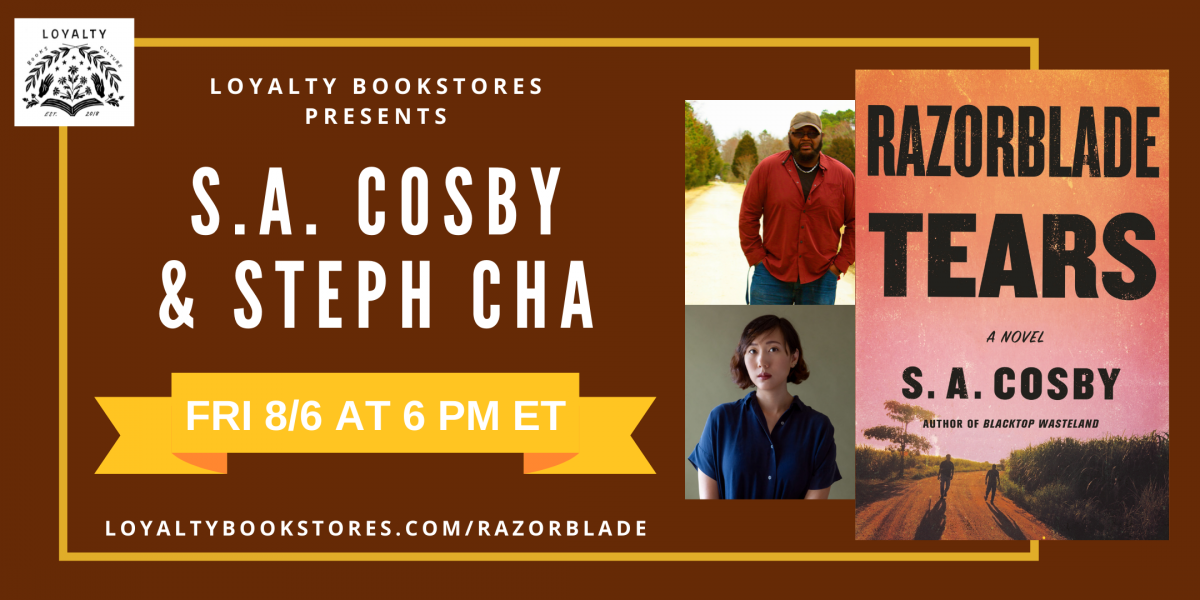 Loyalty is thrilled to celebrate the recent release of Razorblade Tears with S.A. Cosby and Steph Cha! This event will be held digitally via Crowdcast. Click here to register for the event with a donation of any amount of your choice or you can order the book below to be added to the event's registration list. Donations will go to BLM DC. There will also be an option to snag the book during the event.

“A visceral full-body experience, a sharp jolt to the heart, and a treat for the senses…Cosby's moody southern thriller marries the skillful action and plotting of Lee Child with the atmosphere and insight of Attica Locke.” —NPR

A Black father. A white father. Two murdered sons. A quest for vengeance.

Ike Randolph has been out of jail for fifteen years, with not so much as a speeding ticket in all that time. But a Black man with cops at the door knows to be afraid.

The last thing he expects to hear is that his son Isiah has been murdered, along with Isiah’s white husband, Derek. Ike had never fully accepted his son but is devastated by his loss.

Derek’s father Buddy Lee was almost as ashamed of Derek for being gay as Derek was ashamed of his father's criminal record. Buddy Lee still has contacts in the underworld, though, and he wants to know who killed his boy.

Ike and Buddy Lee, two ex-cons with little else in common other than a criminal past and a love for their dead sons, band together in their desperate desire for revenge. In their quest to do better for their sons in death than they did in life, hardened men Ike and Buddy Lee will confront their own prejudices about their sons and each other, as they rain down vengeance upon those who hurt their boys.

Provocative and fast-paced, S. A. Cosby's Razorblade Tears is a story of bloody retribution, heartfelt change - and maybe even redemption.

S. A. Cosby is an Anthony Award-winning writer from southeastern Virginia. His the bestselling author of Blacktop Wasteland, a New York Times Book Review Editors' Choice and Goodreads Choice Awards semifinalist, as well as Brotherhood of the Blade and My Darkest Prayer. When not writing, he is an avid hiker and chess player.

Steph Cha is the author of Your House Will Pay, winner of the Los Angeles Times Book Prize and the California Book Award, and the Juniper Song crime trilogy. She’s a critic whose work has appeared in the Los Angeles Times, USA Today, and the Los Angeles Review of Books, where she served as noir editor, and is the current series editor of the Best American Mystery & Suspense anthology. A native of the San Fernando Valley, she lives in Los Angeles with her family.

Your House Will Pay: A Novel (Paperback)