Helena Andrews-Dyer and R. Eric Thomas for RECLAIMING HER TIME: THE POWER OF MAXINE WATERS 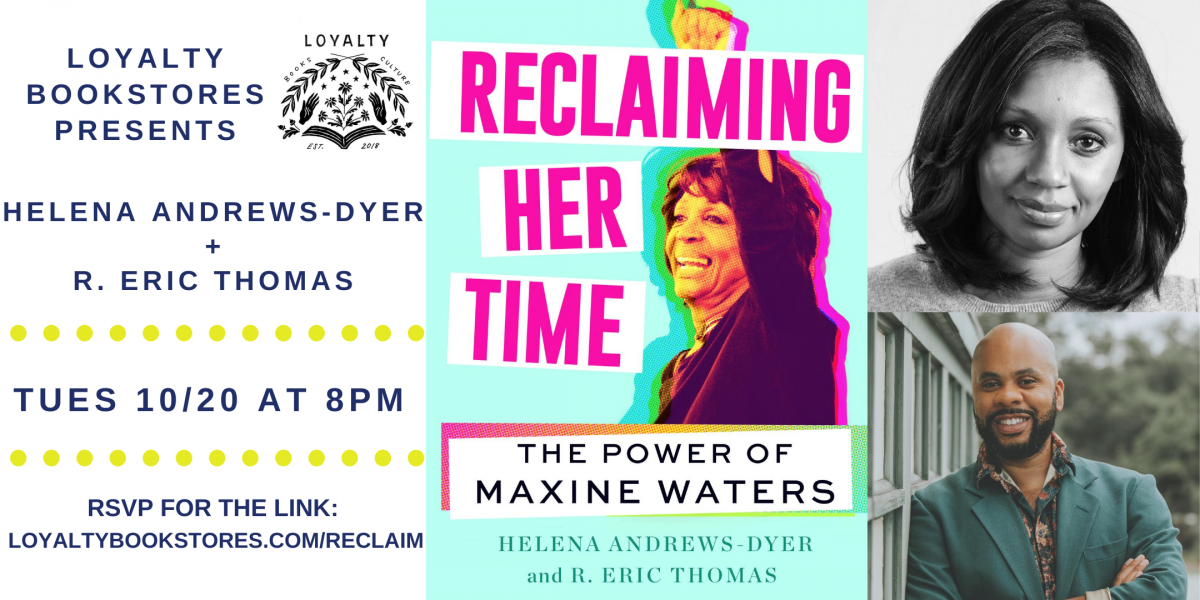 We're thrilled to celebrate Reclaiming Her Time: The Power of Maxine Waters with authors Helena Andrews-Dyer and R. Eric Thomas! This event will be held digitally via Crowdcast. Click here to register for the event with a donation of any amount of your choice. Donations will go to Black Lives Matter DC. You can pre-order the book below and there will also be an option to buy the book during the event.

To millions nationwide, Congresswoman Maxine Waters is a hero of the resistance and an icon, serving eye rolls, withering looks, and sharp retorts to any who dare waste her time on nonsense. But behind the Auntie Maxine meme is a seasoned public servant and she’s not here to play. Throughout her forty years in public service and eighty years on earth, U.S. Representative for California’s 43rd district has been a role model, a crusader for justice, a game-changer, a trailblazer, and an advocate for the marginalized who has long defied her critics, including her most vocal detractor, Donald J. Trump. And she’s just getting started.

From her anti-apartheid work and support of affirmative action to her passionate opposition to the Iraq War and calls to hold Trump to account, you can count on Auntie Maxine to speak truth to power and do it with grace and, sometimes, sass. As ranking member of the House Financial Services Committee and one of the most powerful black women in America, she is the strong, ethical voice the country has always needed, especially right now.

RECLAIMING HER TIME pays tribute to all things Maxine Waters, from growing up in St. Louis “too skinny” and “too black,” to taking on Wall Street during the financial crisis and coming out on top in her legendary showdowns with Trump and his cronies. Featuring inspiring highlights from her personal life and political career, beloved memes, and testimonies from her many friends and fans, Reclaiming Her Time is a funny, warm, and admiring portrait of a champion who refuses to stay silent in the face of corruption and injustice; a powerful woman who is an inspiration to us all.

HELENA ANDREWS-DYER is a full-time columnist at The Washington Post, covering the intersection of popular culture and politics in the nation’s capital. Before joining The Post, Helena was a contributing editor at xoJane, a digital women’s magazine founded by Jane Pratt. Helena’s work has appeared in Oprah Magazine, Marie Claire, Glamour, The New York Times, The Washington Post, The Washington Post Magazine, Essence, OUT, GOOD and Uptown Magazines, among other national publications. Helena has appeared on ABC’s “Nightline,” CBS's “Early Show,” CNN, MSNBC, XM Radio, NPR and NY1.

R. ERIC THOMAS is the inventor of the “Auntie Maxine” meme and a senior staff writer for ELLE.com, where his column has racked up millions of pageviews over the course of its instantly viral three-year run. Described as “the escape from politics that you need right now” by Jonathan Capehart, R. Eric Thomas’s column is typically the #1 most-read piece on Elle.com in a given day. His writing and work have also appeared in the New York Times Travel, Style and Book Review sections; W Magazine; Audible’s “Sounds Like America” podcast; ManRepeller; The Philadelphia Inquirer; and Philadelphia Magazine. He’s been featured in The Washington Post, The Philadelphia Inquirer, and Baltimore Magazine. In 2017, he was named Best Humorist in Philadelphia Magazine’s Best of Philly Issue. He is also the author of  Here For It: How to Save Your Soul in America, a memoir-in-essays.

Reclaiming Her Time: The Power of Maxine Waters (Hardcover)