Gina Apostol and Sabina Murray for THE REVOLUTION OF RAYMUNDO MATA 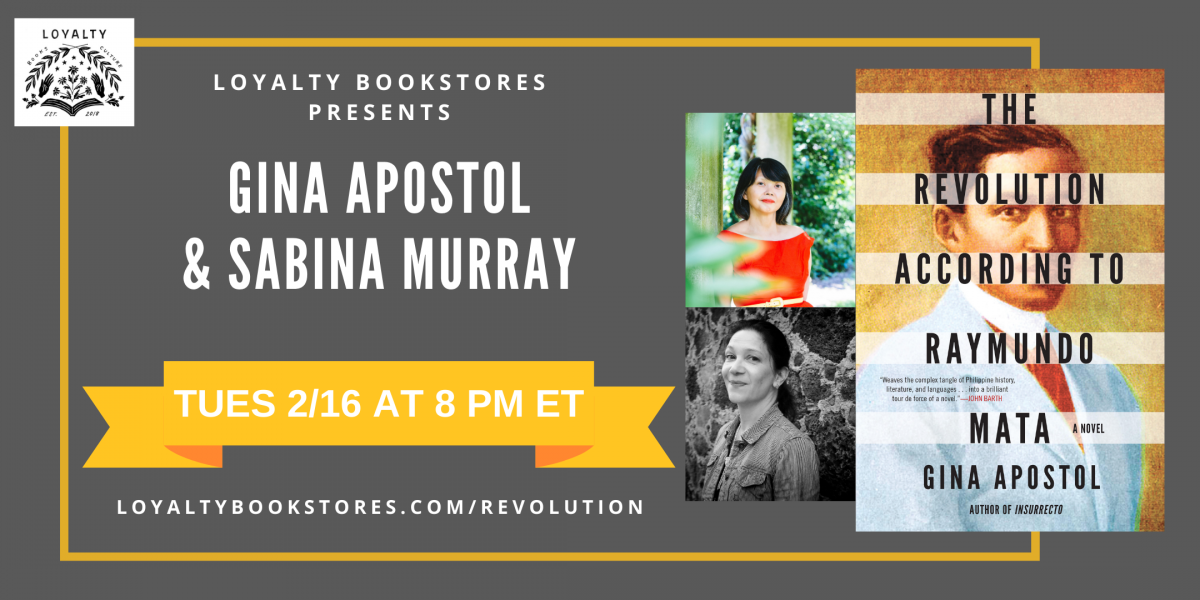 We are super psyched to celebrate The Revolution According to Raymundo Mata with Gina Apostol and Sabina Murray. The Revolution of Raymundo Mata has won the Philippine National Book Award and is a favorite of Loyalty's programs & marketing manager Christine! Click here to register for the event with a donation of any amount of your choice. Donations will go to Black Lives Matter DC. You can order the book below and there will also be an option to buy the book during the event. If you purchase the book from our website, you'll be automatically registered for the event.

Revealing glimpses of the Philippine Revolution and the Filipino writer Jose Rizal emerge despite the worst efforts of feuding academics in Apostol’s hilariously erudite novel, which won the Philippine National Book Award.

Gina Apostol’s riotous second novel takes the form of a memoir by one Raymundo Mata, a half-blind bookworm and revolutionary, tracing his childhood, his education in Manila, his love affairs, and his discovery of writer and fellow revolutionary, Jose Rizal. Mata’s 19th-century story is complicated by present-day foreword(s), afterword(s), and footnotes from three fiercely quarrelsome and comic voices: a nationalist editor, a neo-Freudian psychoanalyst critic, and a translator, Mimi C. Magsalin.

In telling the contested and fragmentary story of Mata, Apostol finds new ways to depict the violence of the Spanish colonial era, and to reimagine the nation’s great writer, Jose Rizal, who was executed by the Spanish for his revolutionary activities, and is considered by many to be the father of Philippine independence.

The Revolution According to Raymundo Mata offers an intoxicating blend of fact and fiction, uncovering lost histories while building dazzling, anarchic modes of narrative.

Gina Apostol is the PEN Open Book Award–winning author of Gun Dealers’ Daughter, as well as a two-time winner of the National Book Award in the Philippines for her novels Bibliolepsy and The Revolution According to Raymundo Mata. Her short stories have appeared in various anthologies and journals including The Gettysburg Review and the Penguin anthology of Asian American fiction, Charlie Chan Is Dead, Volume 2.

Sabina Murray is the author of six books of fiction including the novel Valiant Gentlemen, a New York Timesand Washington Post Notable Book, and the story collection The Caprices, winner of the 2002 PEN/Faulkner Award.  The Human Zoo, a novel set in Duterte’s Manila, is forthcoming from Grove August 2021.

The Revolution According to Raymundo Mata (Hardcover)