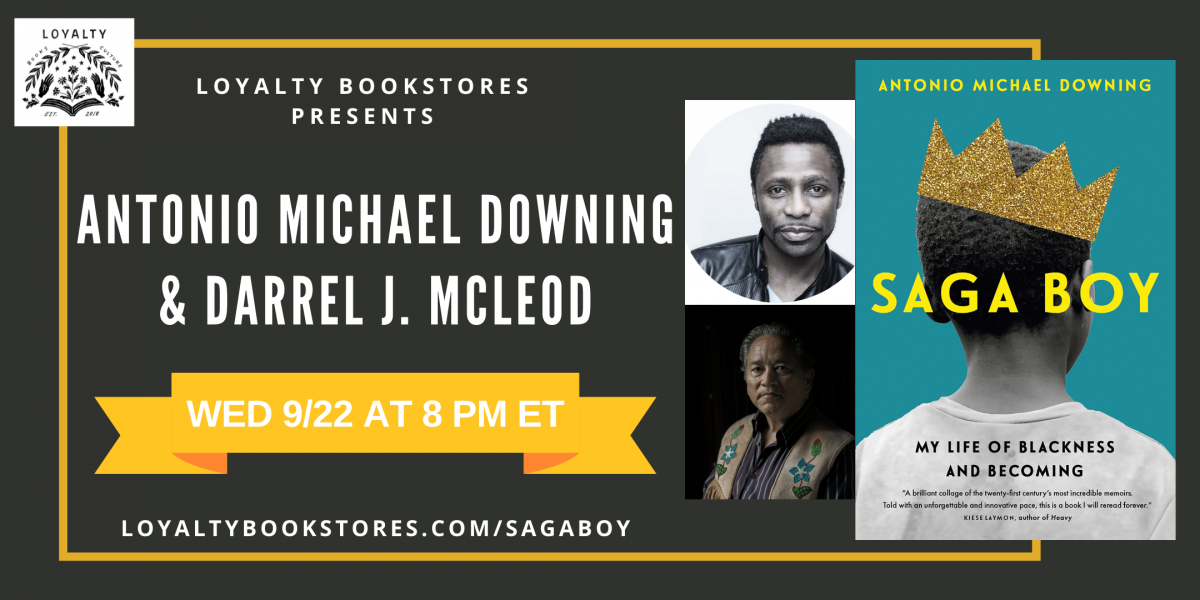 Loyalty is thrilled to welcome Antonio Michael Downing in conversation with Darrel J. McLeod for Saga Boy: My Life of Blackness and Becoming! This event will be held digitally via Crowdcast. Click here to register for the event with a donation of any amount of your choice or you can order the book below to be added to the event's registration list. Donations will go to Title Track Michigan - a nonprofit organization engaged in water protection, Indigenous solidarity, and racial justice. There will also be an option to snag the book during the event.

“Singularly dazzling, Saga Boy is a brilliant collage of the twenty-first century’s most incredible memoirs. Told with an unforgettable and innovative pace, this a book I will reread forever.”—Kiese Laymon, author of Heavy

Growing up as a clever, willful boy in a tiny village in the tropical forests of Trinidad--raised by his indomitable grandmother, Miss Excelly, and her King James Bible--Antonio Michael Downing is steeped in the legacies of his scattered family, the vibrant culture of the island, and the weight of its colonial history. But following Miss Excelly's death, everything changes. The eleven-year-old Downing seems to fall asleep in the jungle and to wake up in a blizzard: he is sent to live with his devoutly evangelical Aunt Joan in rural Canada, where they are the only Black family in a landscape starkly devoid of the warm lushness of his childhood.

Isolated and longing for home, Downing begins a decades-long journey to transform himself through music and performance. A reunion with his birth parents, whom he has known only through story, closes more doors than it opens. Instead, Downing seeks refuge in increasingly extravagant musical personalities: "Mic Dainjah," a boisterous punk rapper; "Molasses," a soul crooner; and, finally, an eccentric dystopian-era pop star clad in leather and gold, "John Orpheus." In his mid-thirties, increasingly addicted to escapism, attention, and sex, Downing realizes he has become a "Saga Boy"--a Trinidadian playboy archetype--like his father and grandfather before him. When his choices land him in a jail cell, Downing must face who he has become.

Harnessing the lyricism of an evangelical childhood into a flourishing and unforgettable prose all its own, Saga Boy is a poignant journey of overcoming, belonging, and becoming one's own self.

Antonio Michael Downing is the author of Saga Boy. He grew up in southern Trinidad, northern Ontario, Brooklyn, and Kitchener. He is a musician, writer, and activist based in Toronto. His debut novel, Molasses, was published to critical acclaim. In 2017, he was named by the RBC Taylor Prize as one of Canada’s top emerging authors for nonfiction. He performs and composes music as John Orpheus.

Darrel J. McLeod is the author of Peyakow and Mamaskatch, which received the Governor General’s Literary Award for Nonfiction. He is Cree from treaty eight territory in Northern Alberta. Before deciding to pursue writing in his retirement, McLeod was a chief negotiator of land claims for the federal government and executive director of education and international affairs with the Assembly of First Nations. He holds degrees in French literature and education from the University of British Columbia. He lives in Sooke, British Columbia.

Saga Boy: My Life of Blackness and Becoming (Hardcover)