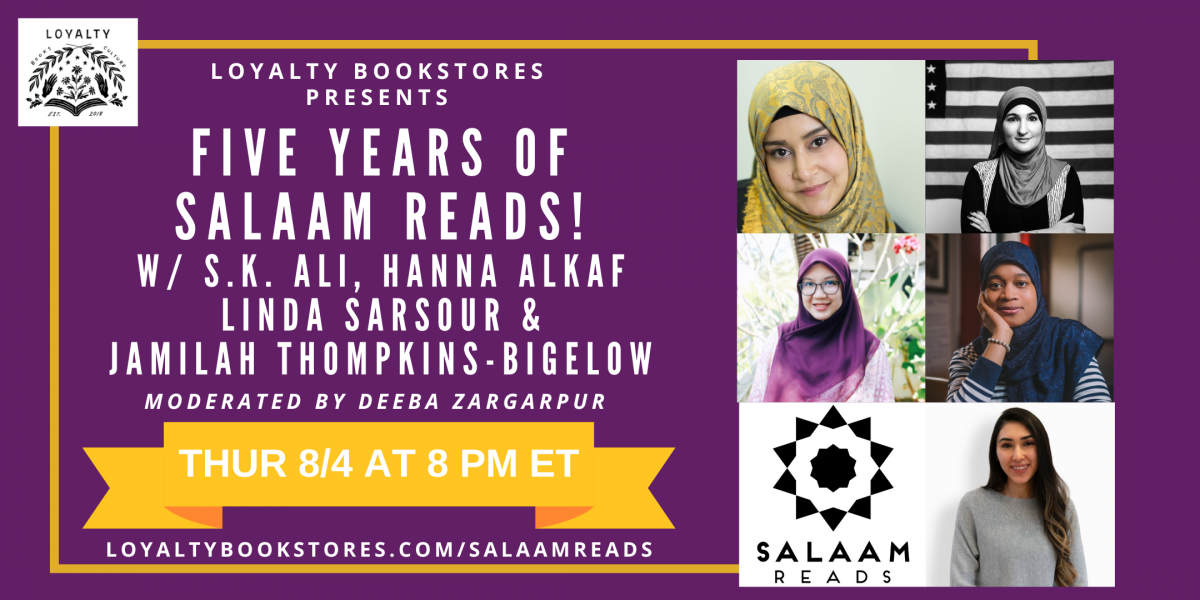 Loyalty is thrilled to host a virtual panel celebrating the fifth anniversary of Salaam Reads, the first and only imprint dedicated to exclusively featuring Muslim characters and stories! This amazing panel, moderated by Salaam Reads editor Deeba Zargarpur, features the incredible authors S.K. Ali, Hanna Alkaf, Linda Sarsour & Jamilah Thompkins-Bigelow! This event is free to attend and will be held digitally via Crowdcast. Click here to register for the event. You can also order a copy of any of the books below to be automatically added to the registration list, and there will be an option to snag these books during the event.

Salaam Reads authors depict a diverse panoply of experiences lived by characters who are united under a shared umbrella of Muslim identity. These much-needed books showcase many different characters, traditions, and celebrations that remain underrepresented in the book world. Salaam Reads titles celebrate joy, vibrancy, and variety in stories of Muslim life and shine light on a broad range of experiences and emotions—immigrant and second-generation experiences, ways of finding a sense of belonging, and young people’s relationships with their own cultural identity, and much more.

From contemporary to fantastical, science fiction, and more, Salaam Reads is a home for literature that widens the lens of what it means to be Muslim, offering readers a way to see themselves reflected in the pages of the imprint’s books and to discover the wide variety and many intersections of what the Muslim experience can be. The imprint publishes books for young readers of all ages, including picture books, chapter books, middle grade, and young adult.

S. K. Ali is the author of Saints and Misfits, a finalist for the American Library Association’s 2018 William C. Morris Award and the winner of the APALA Honor Award and Middle East Book Honor Award; and Love from A to Z, a Today show Read with Jenna Book Club selection. Both novels were named best YA books of the year by various media including Entertainment Weekly and Kirkus Reviews. She is also the author of Misfit in Love and Love from Mecca to Medina. You can find Sajidah online at SKAliBooks.com and follow her on Instagram @SKAliBooks, TikTok @SKAliBooks, and on Twitter at @SajidahWrites.

Hanna Alkaf is the author of The Weight of Our Sky, The Girl and the Ghost, and Queen of the Tiles. She graduated with a degree in journalism from Northwestern University and has spent most of her life working with words, both in fiction and nonfiction. She lives in Kuala Lumpur with her family.

Linda Sarsour is a Brooklyn-born Palestinian Muslim American community organizer and mother of three. Recognized for her award-winning intersectional work, she served as national cochair of the Women’s March, helping to organize the largest single-day protest in US history. She is the former executive director of the Arab American Association of New York and cofounder of the first Muslim online organizing platform, MPower Change, as well as Until Freedom, a national racial justice organization working with Black and Brown communities across the country.

Jamilah Thompkins-Bigelow is a Philadelphia-based educator and children’s book author. Her works, which center young Black Muslim protagonists, have been recognized and critically praised by many trusted voices in literature, including American Library Association, School Library Journal, and NPR. Her books include Mommy’s Khimar and Your Name is a Song, and she is a contributor to the Once Upon an Eid anthology.

Deeba Zargarpur is an Afghan-Uzbek American. She credits her love of literature across various languages to her immigrant parents, whose eerie tales haunted her well into the night. If given the choice, Deeba would spend her days getting lost in spooky towns with nothing but a notebook and eye for adventure to guide her.

Love from Mecca to Medina (Hardcover)

Queen of the Tiles (Hardcover)

We're in This Together: A Young Readers Edition of We Are Not Here to Be Bystanders (Hardcover)