Christopher Chambers and Cheryl A. Head for SCAVENGER 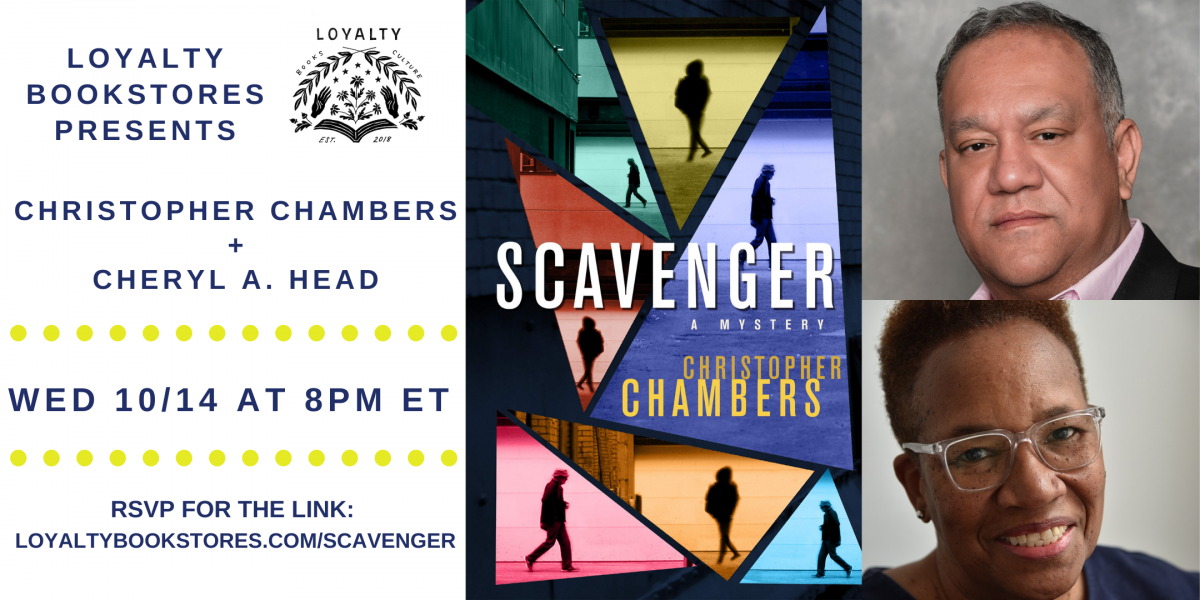 Join Loyalty Bookstores and Three Rooms Press for the launch of Scavenger by Christopher Chambers, in conversation with Cheryl A. Head. This event will be held digitally via Crowdcast. It is a free event but you must RSVP via the link below to get the link and password. (Event link and password info will be sent in your confirmation email).

In the lively, but desperate world of D.C.'s underbelly, a Black homeless man must quickly learn the ropes of being a detective after a wealthy ex-government official sets him up to take the fall for a brutal crime he didn’t commit.

Christopher Chambers, author of A Prayer for Deliverance and Sympathy for the Devil (NAACP Image Award nominee) brings a 21st-century take on hardboiled noir tales in SCAVENGER, a gripping thriller underscored by themes of race, homelessness, hustling, and the savagery—and salvation—of the human psyche.

The novel centers on Dickie Cornish, a Black streetwise survivor living in a homeless camp near D.C.’s Smithsonian Museum of Natural History. Framed for the murder of two of his closest friends and facing life in prison, Dickie crosses paths with wealthy ex-Homeland Security Secretary, Jamie Bracht. Bracht offers him a chance at a new life if Dickie can navigate an underground world to uncover a prize Bracht will stop at nothing to acquire.

As Dickie searches, SCAVENGER tracks its way through an underground population of Washington, D.C., where hustlers, drug addicts, homeless, and undocumented immigrants jostle for crumbs while trying to survive. Chambers paints a portrait of D.C. from the ground up, with back-alley streetscapes, gentrification clashes, and unexpected encounters between politicians and bottom-rung natives—all set against a soundscape of patois, street Spanish, and D.C. slang. A hopeless amateur detective at first, Dickie quickly learns the ropes of being a sleuth in a cat-and-mouse game of greed, deceit, double-crossing, and murder.

Christopher Chambers is a professor of media studies, as well as a novelist published through Random House, MacMillan and Three Rooms Press. His novels include A Prayer for Deliverance and Sympathy for the Devil, the graphic anthology (with Gary Phillips) The Darker Mask, and PEN/Malamud-nominated story, "Leviathan." His short stories have been included in the Anthony award-winning anthology The Obama Inheritance, The Faking of the President and Black Pulp 2. Professor Chambers is a regular commentator/contributor on media and culture issues on SiriusXM Radio, ABC News, and HuffPost. He resides in Washington, D.C. with his family and German Shepherd, Max.

Cheryl Head’s first book, Long Way Home: A World War II Novel deals with the themes of personal courage, race, and sexual identity. It was a 2015 Next Generation Indie Book Awards finalist in the African American Literature, and Historical Fiction categories. Head writes the Charlie Mack Motown Mystery series, published by Bywater Books. The first in the series Bury Me When I’m Dead is a 2017 Lambda Literary Awards Finalist. The other books are: Wake Me When It’s Over (Detroit Public Library 2017 African-American Book List), Catch Me When I’m Falling (Next Generation Indie Book Awards-Mystery Finalist; 2019 Detroit Public Library African- American Book List), Judge Me When I’m Wrong (2019 Popular Choice Goldie Award), and Find Me When I’m Lost, released in July. Head is a member of the national Bouchercon board. In 2019, she was inducted into the Saints and Sinners Literary Festival Hall of Fame.