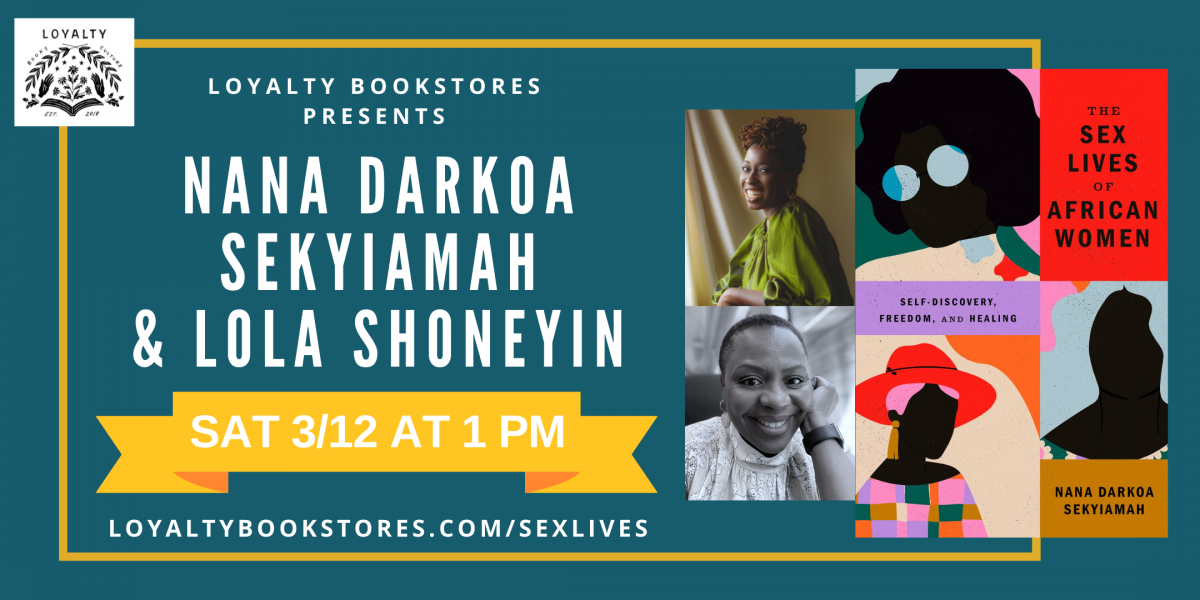 Loyalty is thrilled to host Nana Darkoa Sekyiamah and Lola Shoneyin in conversation for The Sex Lives of African Women! This event will be held digitally via Crowdcast. Click here to register for the event with a donation of any amount of your choice or you can order the book below to be added to the event's registration list. Donations will go to BLM DC. There will also be an option to snag the book during the event. *Plus, orders will receive a SEXY bundle, while supplies last—more info here!*

"Dazzling... the tone is hopeful, resilient and accepting. Marked by the diversity of experiences shared, the wealth of intimate details, and the total lack of sensationalism, this is an astonishing report on the quest for sexual liberation."
—Publishers Weekly, Starred Review

"Overflowing with candor, vulnerability, and juiciness, this collection of raw, tender stories that Nana Darkoa Sekyiamah has so lovingly gathered will upend all of your assumptions and stereotypes. These mothers, activists, writers, sex workers, and others share painful truths, evolving glories, and journeys toward love and freedom, in their own words. They are trans, queer, heterosexual, kinky, and say, 'To hell with labels.' Facing down dangers and double standards, they are healing. The Sex Lives of African Women captures the breadth and depth of the Diaspora with the intimacy of looking in a mirror. Marvelous!”
—Deesha Philyaw, author of The Secret Lives of Church Ladies

"Touching, joyful, defiant -- and honest."
–– The Economist, a best book of the year

A conversation starter like Three Women but centering the experiences of women of color: a mellifluous chorus celebrating the liberation, individuality, and joy of African women's multifaceted sexuality.

Thanks to her blog, “Adventures from the Bedrooms of African Women,” Nana Darkoa Sekyiamah has spent decades talking openly and intimately to African women around the world about sex. For this book she spoke to over 30 African women across the globe while chronicling her own journey toward sexual freedom.

We meet Yami, a pansexual Canadian of Malawian heritage, who describes negotiating the line between family dynamics and sexuality. There’s Esther, a cis-gendered hetero woman studying in America, by way of Cameroun and Kenya, who talks of how a childhood rape has made her rebellious and estranged from her missionary parents. And Tsitsi, an HIV-positive Zimbabwean woman who is raising a healthy, HIV-free baby.

Across a queer community in Egypt, polyamorous life in Senegal, and a reflection on the intersection of religion and pleasure in Cameroun, Sekyiamah explores the many layers of love and desire, its expression, and how it forms who we are.

In these confessional pages, women control their own bodies and pleasure, and assert their sexual power. Capturing the rich tapestry of sex positivity, The Sex Lives of African Women is a singular and subversive book that celebrates the liberation, individuality, and joy of African women's multifaceted sexuality.

Nana Darkoa Sekyiamah is a feminist activist, writer and blogger. She is the co-founder of Adventures from the Bedrooms of African Women, an award-winning blog that focuses on African women, sex and sexualities, and she writes frequently for The Guardian, Open Democracy, and elsewhere. She works with the Association for Women's Rights in Development (AWID) as director of communications and tactics. She lives in Accra, Ghana.

Lola Shoneyin's works include three books of poems: So All the Time I Was Sitting on an Egg (1997), Song of a Riverbird (2002) and For the Love of Flight (2010); and three children's books titled Mayowa and the Masquerades (2010), Do As You are Told, Baji (2019) and Iyaji, the Housegirl (2020). Her debut novel, The Secret Lives of Baba Segi’s Wives, was nominated for the Orange Prize for Fiction in 2011 and went on to win the PEN Oakland 2011 Josephine Miles Literary Award, and the Ken Saro Wiwa Prose Prize. It has since been adapted for a one-woman show and a stage play. In 2021, it was announced that it would be a Netflix Original, produced by EbonyLife Television. She resides in Lagos, Nigeria with two dogs.

The Secret Lives of Baba Segi's Wives: A Novel (Paperback)