Kaia Alderson and Beverly Jenkins for SISTERS IN ARMS 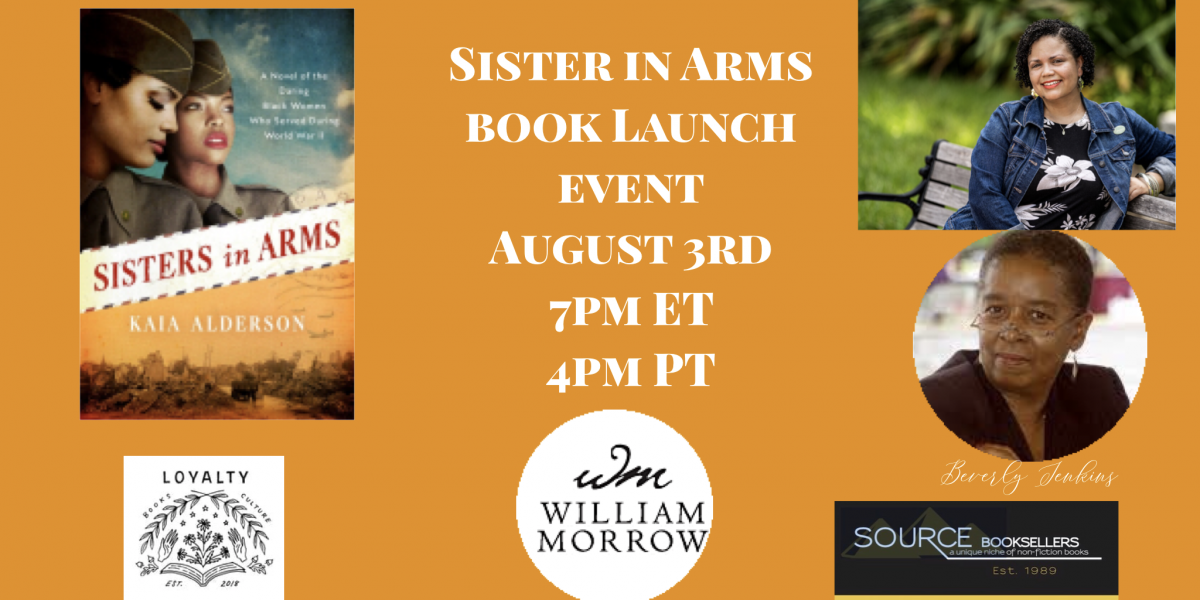 Join Kaia Alderson and Beverly Jenkings for a launch celebration of Sister In Arms! Loyalty is so excited to join our friends at Source Booksellers for this virtual event hosted by William Morrow on Crowdcast. Purchase a copy of Sister In Arms to be registered for the event or you can also register for free by emailing events@loyaltybookstores.com to sign up. You will receive the event confirmation info the week of the event.

Kaia Alderson’s debut historical fiction novel reveals the untold, true story of the Six Triple Eight, the only all-Black battalion of the Women’s Army Corps, who made the dangerous voyage to Europe to ensure American servicemen received word from their loved ones during World War II.

Grace Steele and Eliza Jones may be from completely different backgrounds, but when it comes to the army, specifically the Women’s Army Auxiliary Corps (WAAC), they are both starting from the same level. Not only will they be among the first class of female officers the army has even seen, they are also the first Black women allowed to serve.

As these courageous women help to form the 6888th Central Postal Directory Battalion, they are dealing with more than just army bureaucracy—everyone is determined to see this experiment fail. For two northern women, learning to navigate their way through the segregated army may be tougher than boot camp. Grace and Eliza know that there is no room for error; they must be more perfect than everyone else.

When they finally make it overseas, to England and then France, Grace and Eliza will at last be able to do their parts for the country they love, whatever the risk to themselves.

Based on the true story of the 6888th Postal Battalion (the Six Triple Eight), Sisters in Arms explores the untold story of what life was like for the only all-Black, female U.S. battalion to be deployed overseas during World War II.

Kaia Alderson is a historical women’s fiction author with a passion for discovering “hidden figures” in African-American women’s history. She has also published romantic comedy and historical romance works under the name Kaia Danielle as well as a few comics short stories. She has been featured on Book Riot and Bustle’s websites. Kaia is an alumna of Spelman College and the University of West Georgia.

Beverly Jenkins (born 1951, Detroit) is an American author of historical and contemporary romance novels with a particular focus on 19th century African-American life. ... Jenkins studied at Michigan State University as a Journalism and English Literature major. She lives in Southeastern Michigan.

Sisters in Arms: A Novel of the Daring Black Women Who Served During World War II (Paperback)