Victor Manibo and Isabel Yap for THE SLEEPLESS 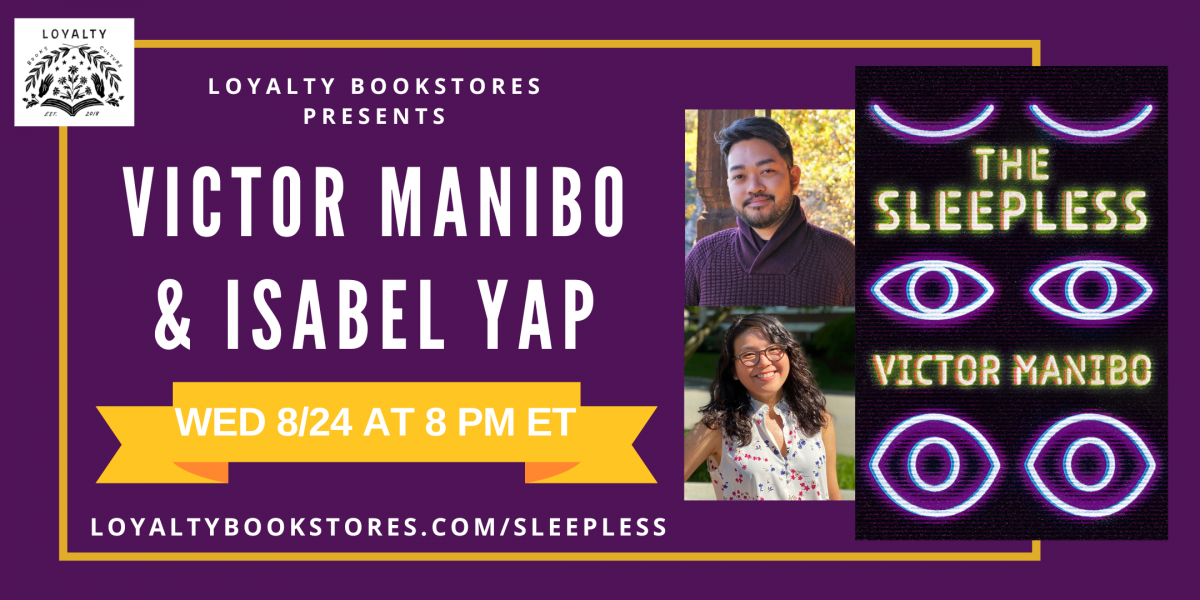 Loyalty is delighted to host Victor Manibo and Isabel Yap in conversation for the release of The Sleepless! This event will be held digitally via Crowdcast. Click here to register for the event with a donation of any amount of your choice. You can also order the book below to be automatically added to the event's registration list. **Preorder your copy of The Sleepless from Loyalty to receive a signed bookplate (while supplies last)!** Donations will go to Partners in Abortion Care. There will also be an option to snag the book during the event.

Journalist Jamie Vega is Sleepless: he can’t sleep, nor does he need to. When his boss dies on the eve of a controversial corporate takeover, Jamie doesn’t buy the too-convenient explanation of suicide, and launches an investigation of his own.

But everything goes awry when Jamie discovers that he was the last person who saw Simon alive. Not only do the police suspect him, Jamie himself has no memory of that night. Alarmingly, his memory loss may have to do with how he became Sleepless: not naturally, like other Sleepless people, but through a risky and illegal biohacking process.

As Jamie delves deeper into Simon’s final days, he tangles with extremist organizations and powerful corporate interests, all while confronting past traumas and unforeseen consequences of his medical experimentation. But Jamie soon faces the most dangerous decision of all as he uncovers a terrifying truth about Sleeplessness that imperils him—and all of humanity.

Victor Manibo is a speculative fiction writer living in New York City, and his writing is influenced by his experiences as an immigration and civil rights lawyer. As a queer immigrant and a person of color, he also writes about the lives of people with these identities.

Isabel Yap writes fiction and poetry, works in the tech industry, and drinks tea. Born and raised in Manila, she has lived and worked in the US since 2010. She holds a BS in Marketing from Santa Clara University and an MBA from Harvard Business School. In 2013 she attended the Clarion Writers Workshop. Her work has appeared in venues including Tor.com, Lithub, and Year’s Best Weird Fiction. Her debut short story collection, Never Have I Ever, was a finalist for the Locus, Ignyte, and Crawford Awards. She is @visyap on Twitter and her website is https://isabelyap.com.

Never Have I Ever: Stories (Paperback)