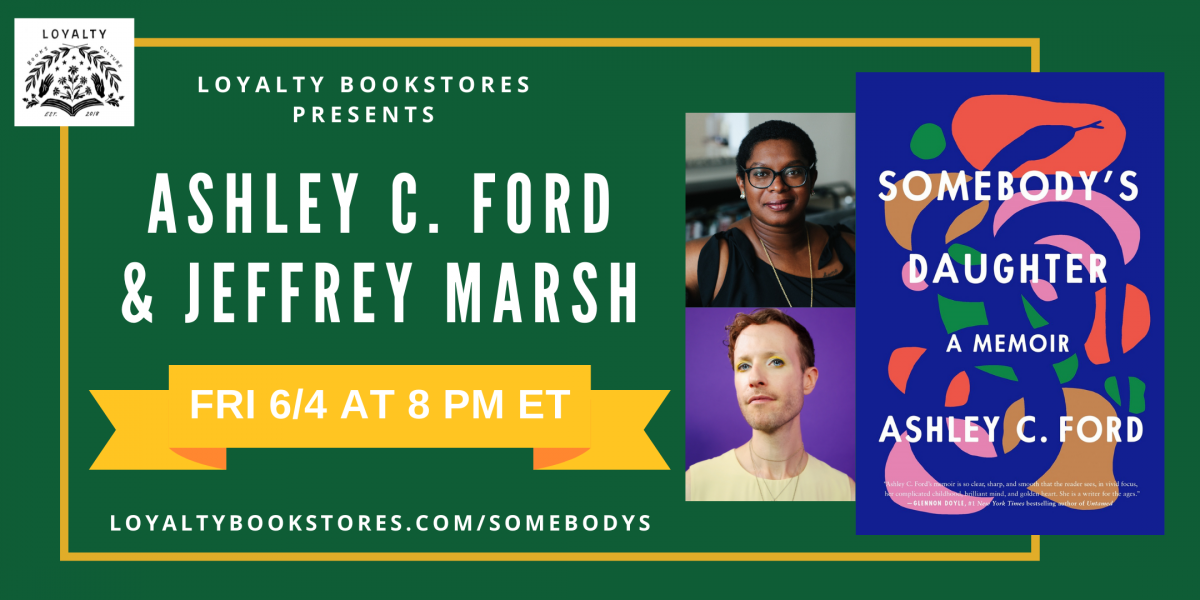 Loyalty is so so excited to celebrate the release of Somebody's Daughter with Ashley C. Ford and Jeffrey Marsh! This event will be held digitally via Crowdcast. Click here to register for the event with a donation of any amount of your choice or you can order the book below to be added to the event's registration list. Donations will go to BLM DC. There will also be an option to snag the book during the event.

“Sure to be one of the best memoirs of 2021.” —Kirkus Reviews, starred review

“So clear, sharp, and smooth that the reader sees, in vivid focus, Ford’s complicated childhood, brilliant mind, and golden heart. Ford is a writer for the ages, and Somebody’s Daughter will be a book of the year.” —Glennon Doyle, #1 New York Times bestselling author of Untamed

“Ford’s wrenchingly brilliant memoir is truly a classic in the making. The writing is so richly observed and so suffused with love and yearning that I kept forgetting to breathe while reading it.” —John Green, #1 New York Times bestselling author

One of the most prominent voices of her generation debuts with an extraordinarily powerful memoir: the story of a childhood defined by the looming absence of her incarcerated father.

Through poverty, adolescence, and a fraught relationship with her mother, Ashley Ford wishes she could turn to her father for hope and encouragement. There are just a few problems: he’s in prison, and she doesn’t know what he did to end up there. She doesn’t know how to deal with the incessant worries that keep her up at night, or how to handle the changes in her body that draw unwanted attention from men. In her search for unconditional love, Ashley begins dating a boy her mother hates. When the relationship turns sour, he assaults her. Still reeling from the rape, which she keeps secret from her family, Ashley desperately searches for meaning in the chaos. Then, her grandmother reveals the truth about her father’s incarceration . . . and Ashley’s entire world is turned upside down.

Somebody’s Daughter steps into the world of growing up a poor, Black girl in Indiana with a family fragmented by incarceration, exploring how isolating and complex such a childhood can be. As Ashley battles her body and her environment, she embarks on a powerful journey to find the threads between who she is and what she was born into, and the complicated familial love that often binds them.

Ashley C. Ford is a writer, host, and educator who lives in Indianapolis, Indiana with her husband, poet and fiction writer Kelly Stacy, and their chocolate lab Astro Renegade Ford-Stacy. Ford is the former host of The Chronicles of Now podcast, co-host of The HBO companion podcast Lovecraft Country Radio, seasons one & three of MasterCard’s Fortune Favors The Bold, as well as the video interview series PROFILE by BuzzFeed News, and Brooklyn-based news & culture TV show, 112BK. She was also the host of the first season of Audible's literary interview series, Authorized. She has been named among Forbes Magazine's 30 Under 30 in Media (2017), Brooklyn Magazine's Brooklyn 100 (2016), Time Out New York's New Yorkers of The Year (2017), and Variety’s New Power of New York (2019).

Jeffrey Marsh’s spiritual and inclusive messages have received over 400 million views on social media. Jeffrey is a viral TikTok and Instagram star. Jeffrey is the first openly nonbinary public figure to be interviewed on national television, for Unfiltered. Jeffrey was also the first nonbinary author to be offered a book deal with any "Big 5" publisher, at Penguin Random House. Jeffrey’s bestselling Buddhist self-esteem guide How To Be You, is an innovative, category-non-conforming work that combines memoir, workbook, and spiritual advice. How To Be You topped Oprah's Gratitude Meter and was named Excellent Book of the Year by TED-Ed.  In 2019, How To Be You was re-issued as a Barnes & Noble Proprietary Edition. Jeffrey has been a student and teacher of Zen for over twenty years.

How to Be You: Stop Trying to Be Someone Else and Start Living Your Life (Paperback)