Suyi Davies Okungbowa and Evan Winter for SON OF THE STORM 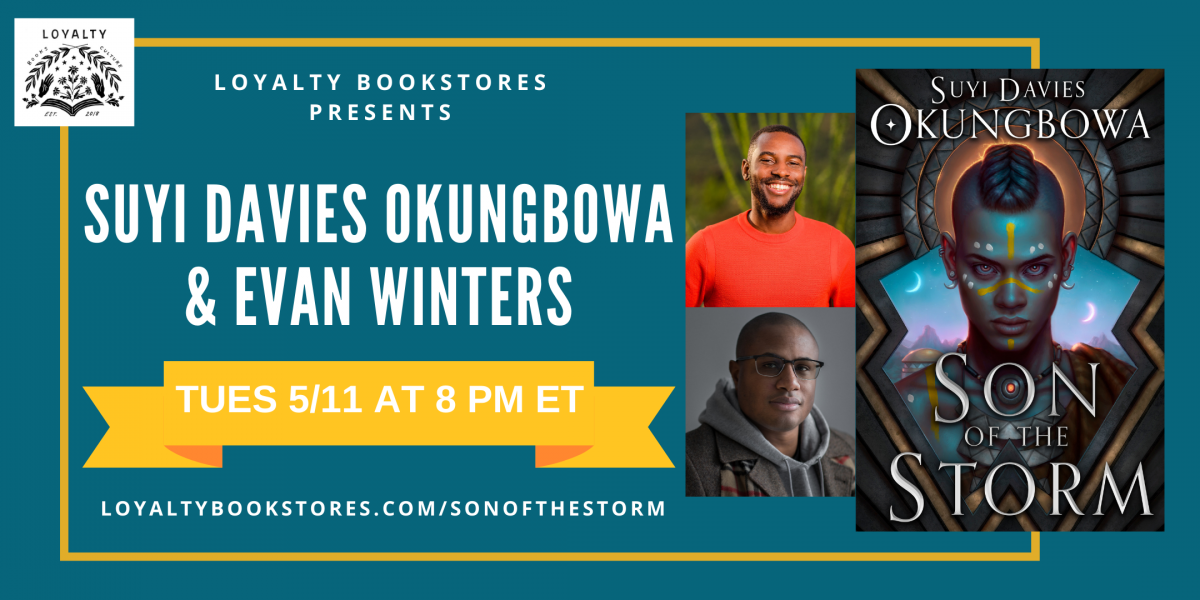 Loyalty is super psyched to celebrate the release of Son of the Storm with Suyi Davies Okungbowa and Evan Winters!! This event will be held digitally via Crowdcast. Click here to register for the event with a donation of any amount of your choice or you can order the book below to be added to the event's registration list. Donations will go to BLM DC. There will also be an option to snag the book during the event.

From one of the most exciting new storytellers in epic fantasy, Son of the Storm is a sweeping tale of violent conquest and forgotten magic set in a world inspired by the pre-colonial empires of West Africa.

"Everything I love in a fantasy novel. Damn good stuff!" —Jenn Lyons, author of The Ruin of Kings

In the ancient. city of Bassa, Danso is a clever scholar on the cusp of achieving greatness—only he doesn’t want it. Instead, he prefers to chase forbidden stories about what lies outside the city walls. The Bassai elite claim there is nothing of interest. The city’s immigrants are sworn to secrecy.

But when Danso stumbles across a warrior wielding magic that shouldn’t exist, he’s put on a collision course with Bassa’s darkest secrets. Drawn into the city’s hidden history, he sets out on a journey beyond its borders. And the chaos left in the wake of his discovery threatens to destroy the empire.

Suyi Davies Okungbowa is a Nigerian author of speculative fiction inspired by his West African origins. He is the author of David Mogo, Godhunter, and his shorter works have appeared in Lightspeed, Nightmare, Strange Horizons, and other periodicals and anthologies. He lives between Lagos, Nigeria, and Tucson, Arizona, where he teaches writing while completing his MFA in creative writing. He tweets at @IAmSuyiDavies and is @suyidavies everywhere else.

Born in England to South American parents, Evan Winter was raised in Africa near the historical territory of his Xhosa ancestors. Evan has always loved fantasy novels, but when his son was born, he realized that there weren't many epic fantasy novels featuring characters who looked like him. So, before he ran out of time, he started writing them.

Son of the Storm (The Nameless Republic #1) (Paperback)

The Rage of Dragons (The Burning #1) (Paperback)

The Fires of Vengeance (The Burning #2) (Hardcover)