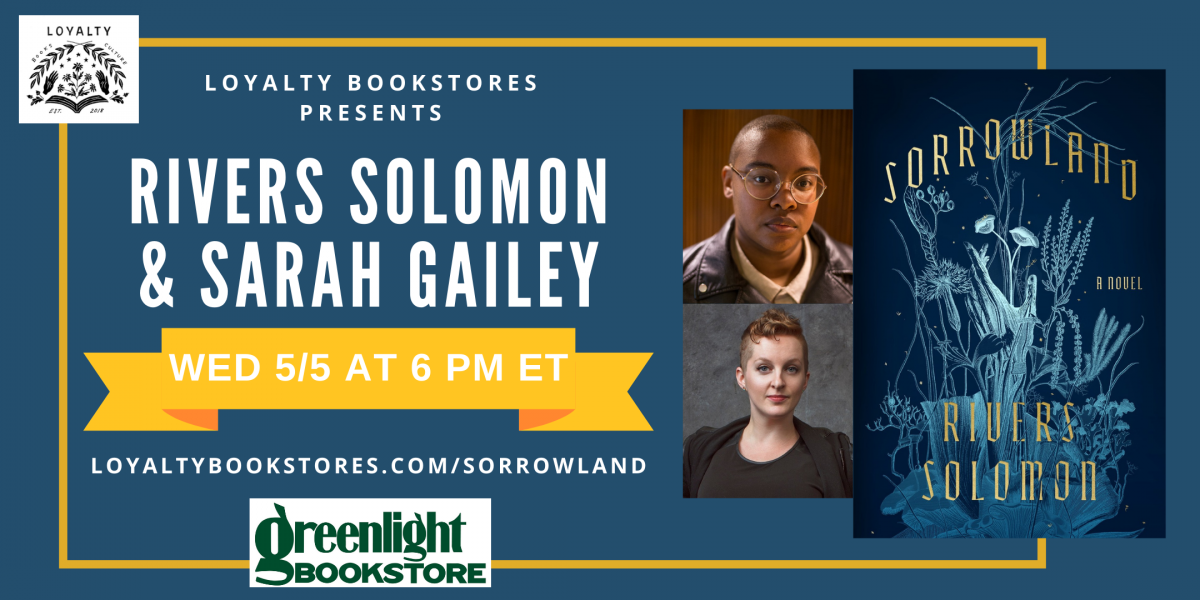 Loyalty is thrilled to partner with Greenlight Bookstore in hosting Rivers Solomon and Sarah Gailey for Sorrowland!! This event will be held digitally via Crowdcast. Click here to register for the event with a donation of any amount of your choice or you can order the book below to be added to the event's registration list. Donations will go to Black Lives Matter DC. There will also be an option to snag the book during the event.

A triumphant, genre-bending breakout novel from one of the boldest new voices in contemporary fiction

Vern—seven months pregnant and desperate to escape the strict religious compound where she was raised—flees for the shelter of the woods. There, she gives birth to twins, and plans to raise them far from the influence of the outside world.

But even in the forest, Vern is a hunted woman. Forced to fight back against the community that refuses to let her go, she unleashes incredible brutality far beyond what a person should be capable of, her body wracked by inexplicable and uncanny changes.

To understand her metamorphosis and to protect her small family, Vern has to face the past, and more troublingly, the future—outside the woods. Finding the truth will mean uncovering the secrets of the compound she fled but also the violent history in America that produced it.

Rivers Solomon’s Sorrowland is a genre-bending work of Gothic fiction. Here, monsters aren’t just individuals, but entire nations. It is a searing, seminal book that marks the arrival of a bold, unignorable voice in American fiction.

Rivers Solomon writes about life in the margins, where they are much at home. In addition to appearing on the Stonewall Honor List and winning a Firecracker Award, Solomon's debut novel An Unkindness of Ghosts was a finalist for a Lambda, a Hurston/Wright, an Otherwise (formerly Tiptree) and a Locus award. Solomon's second book, The Deep, based on the Hugo-nominated song by Daveed Diggs-fronted hip-hop group clipping, was the winner of the 2020 Lambda Award and shortlisted for a Nebula, Locus, Hugo, Ignyte, Brooklyn Library Literary, British Fantasy, and World Fantasy award. Solomon's short work appears in or is forthcoming from Black Warrior Review, The New York Times, The New York Times Magazine, Guernica, Best American Short Stories, Tor.com, Best American Horror and Dark Fantasy, and elsewhere. A refugee of the Trans Atlantic Slave Trade, Solomon was born on Turtle Island but currently resides on an isle in an archipelago off the western coast of the Eurasian continent.

Hugo award winner Sarah Gailey lives and works in California. Their nonfiction has been published by Mashable and the Boston Globe, and their fiction has been published internationally. Their debut novel, Magic for Liars, was an LA Times bestseller. Their most recent novel, The Echo Wife, is available now. You can find links to their work at www.sarahgailey.com. They tweet @gaileyfrey.

An Unkindness of Ghosts (Paperback)

Magic for Liars: A Novel (Paperback)

When We Were Magic (Hardcover)