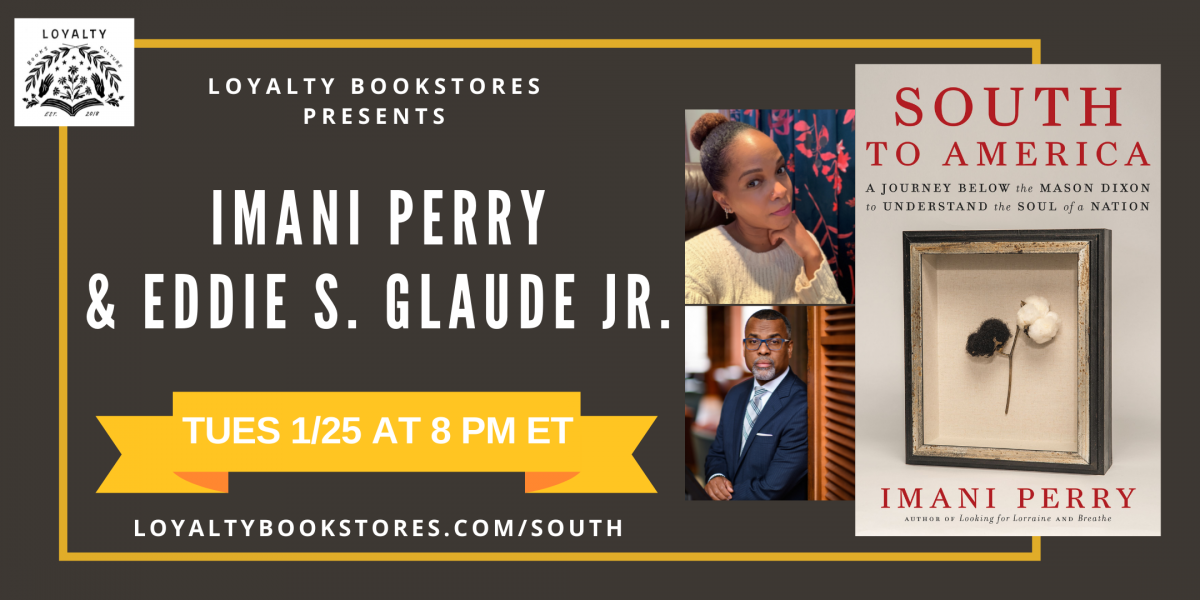 Loyalty is incredibly honored to welcome Imani Perry and Eddie S. Glaude Jr. for a virtual celebration of South to America: A Journey Below the Mason-Dixon to Understand the Soul of a Nation! This event will be held digitally via Crowdcast. Click here to register for the event with a donation of any amount of your choice or you can order the book below to be added to the event's registration list. Donations will go to BLM DC. There will also be an option to snag the book during the event.

“An elegant meditation on the complexities of the American South—and thus of America—by an esteemed daughter of the South and one of the great intellectuals of our time. An inspiration.”

—Isabel Wilkerson, New York Times bestselling author of The Warmth of Other Suns and Caste: The Origins of Our Discontents

An essential, surprising journey through the history, rituals, and landscapes of the American South—and a revelatory argument for why you must understand the South in order to understand America

We all think we know the South. Even those who have never lived there can rattle off a list of signifiers: the Civil War, Gone with the Wind, the Ku Klux Klan, plantations, football, Jim Crow, slavery. But the idiosyncrasies, dispositions, and habits of the region are stranger and more complex than much of the country tends to acknowledge. In South to America, Imani Perry shows that the meaning of American is inextricably linked with the South, and that our understanding of its history and culture is the key to understanding the nation as a whole.

This is the story of a Black woman and native Alabaman returning to the region she has always called home and considering it with fresh eyes. Her journey is full of detours, deep dives, and surprising encounters with places and people. She renders Southerners from all walks of life with sensitivity and honesty, sharing her thoughts about a troubling history and the ritual humiliations and joys that characterize so much of Southern life.

Weaving together stories of immigrant communities, contemporary artists, exploitative opportunists, enslaved peoples, unsung heroes, her own ancestors, and her lived experiences, Imani Perry crafts a tapestry unlike any other. With uncommon insight and breathtaking clarity, South to America offers an assertion that if we want to build a more humane future for the United States, we must center our concern below the Mason-Dixon Line.

Imani Perry is the Hughes-Rogers Professor of African American Studies at Princeton University where she also teaches in Gender and Sexuality Studies, Law and Public Affairs and Jazz Studies. She has a J.D. from Harvard Law School and a Ph.D in the history of American civilization from Harvard University. Perry is the author of Looking for Lorraine: The Radiant and Radical Life of Lorraine Hansberry, winner of the Bograd-Weld Biography Prize of 2019 from the Pen America Foundation. She is also the author of Breathe: A Letter to My Sons, Vexy Thing: On Gender and Liberation, and May We Forever Stand: A History of the Black National Anthem, which was a finalist for the NAACP Image Award for Outstanding Literary Nonfiction. Perry, a native of Birmingham, Alabama, who grew up in Cambridge, Massachusetts, and Chicago, lives outside of Philadelphia with her two sons.

Eddie S. Glaude Jr. is the James S. McDonnell Distinguished University Professor and chair of the Department of African American Studies at Princeton University. He is the former president of the American Academy of Religion, the largest professional organization of scholars of religion in the world. Glaude is the author of several important books including Democracy in Black: How Race Still Enslaves the American Soul, which has been described as “one of the most imaginative, daring books of the twenty-first century.” His most recent book, Begin Again: James Baldwin’s America and Its Urgent Lessons for Our Own, was released on June 30, 2020. Imani Perry describes the book as “precisely the witness we need for our treacherous times. He is a columnist for Time Magazine and an MSNBC contributor on programs like Morning Joe, and Deadline Whitehouse with Nicolle Wallace. He also regularly appears on Meet the Press on Sundays. He hails from Moss Point, Mississippi, a small town on the Gulf Coast, and is a graduate of Morehouse College in Atlanta, Georgia.

South to America: A Journey Below the Mason-Dixon to Understand the Soul of a Nation (Hardcover)

Breathe: A Letter to My Sons (Hardcover)

Looking for Lorraine: The Radiant and Radical Life of Lorraine Hansberry (Paperback)

Begin Again: James Baldwin's America and Its Urgent Lessons for Our Own (Paperback)