Nadia Hashimi and Saumya Dave for SPARKS LIKE STARS 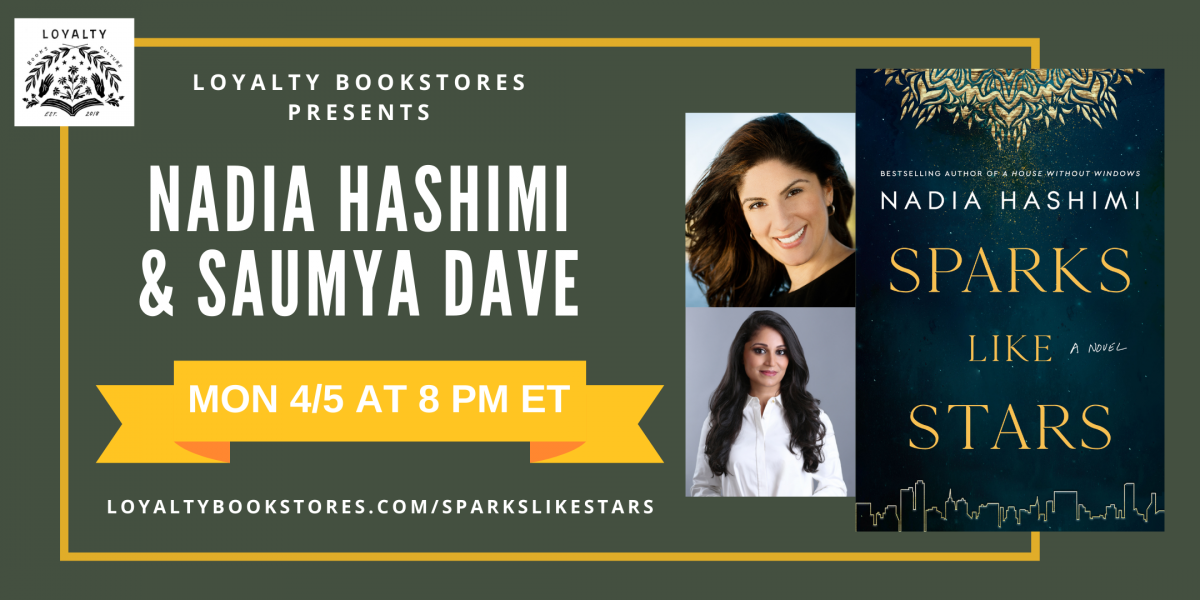 Loyalty is thrilled to welcome Nadia Hashimi and Saumya Dave to celebrate the release of Sparks Like Stars, with Gayatri Sethi moderating! This event will be held digitally via Crowdcast. Click here to register for the event with a donation of any amount of your choice or you can order the book below to be added to the event's registration list. Donations will go to Black Lives Matter DC. There will also be an option to snag the book during the event.

“Suspenseful…emotionally compelling. I found myself eagerly following in a way I hadn’t remembered for a long time, impatient for the next twist and turn of the story."—NPR

An Afghan American woman returns to Kabul to learn the truth about her family and the tragedy that destroyed their lives in this brilliant and compelling novel from the bestselling author of The Pearl That Broke Its Shell, The House Without Windows, and When the Moon Is Low.

Kabul, 1978: The daughter of a prominent family, Sitara Zamani lives a privileged life in Afghanistan’s thriving cosmopolitan capital. The 1970s are a time of remarkable promise under the leadership of people like Sardar Daoud, Afghanistan’s progressive president, and Sitara’s beloved father, his right-hand man. But the ten-year-old Sitara’s world is shattered when communists stage a coup, assassinating the president and Sitara’s entire family. Only she survives.

Smuggled out of the palace by a guard named Shair, Sitara finds her way to the home of a female American diplomat, who adopts her and raises her in America. In her new country, Sitara takes on a new name—Aryana Shepherd—and throws herself into her studies, eventually becoming a renowned surgeon. A survivor, Aryana has refused to look back, choosing instead to bury the trauma and devastating loss she endured.

New York, 2008: Thirty years after that fatal night in Kabul, Aryana’s world is rocked again when an elderly patient appears in her examination room—a man she never expected to see again. It is Shair, the soldier who saved her, yet may have murdered her entire family. Seeing him awakens Aryana’s fury and desire for answers—and, perhaps, revenge. Realizing that she cannot go on without finding the truth, Aryana embarks on a quest that takes her back to Kabul—a battleground between the corrupt government and the fundamentalist Taliban—and through shadowy memories of the world she loved and lost.

Bold, illuminating, heartbreaking, yet hopeful, Sparks Like Stars is a story of home—of America and Afghanistan, tragedy and survival, reinvention and remembrance, told in Nadia Hashimi’s singular voice.

Nadia Hashimi was born and raised in New York and New Jersey. Both her parents were born in Afghanistan and left in the early 1970s, before the Soviet invasion. In 2002, Nadia made her first trip to Afghanistan with her parents. She is a pediatrician and lives with her family in the Washington, DC, suburbs. She is the author of three books for adults, as well as the middle grade novels One Half from the East and The Sky at Our Feet. Visit her online at www.nadiahashimi.com.

Saumya Dave is a psychiatrist and mental health advocate. Her essays, articles, and poetry have been featured in The New York Times, ABC News, Refinery29, and other publications. She is the co-founder of thisisforHER, a nonprofit at the nexus of art and women's mental health, and an adjunct professor at Mount Sinai, where she teaches a Narrative Medicine class. She recently completed her Psychiatry Residency at Mount Sinai Beth Israel, where she was a chief resident and an inductee into the AΩA Medical Honors Society. She currently resides in New York City with her husband and son. This is her first novel.

Gayatri Sethi teaches and writes about social justice, global studies, and comparative education. Born in Tanzania and raised in Botswana, she is of South Asian Punjabi descent, multilingual, and polycultural. She reflects on these lifelong experiences of identity, immigration, and belonging in her debut book titled Unbelonging. When she is not homeschooling or recommending readings as Desi Book Aunty, she travels the globe with her students and family.