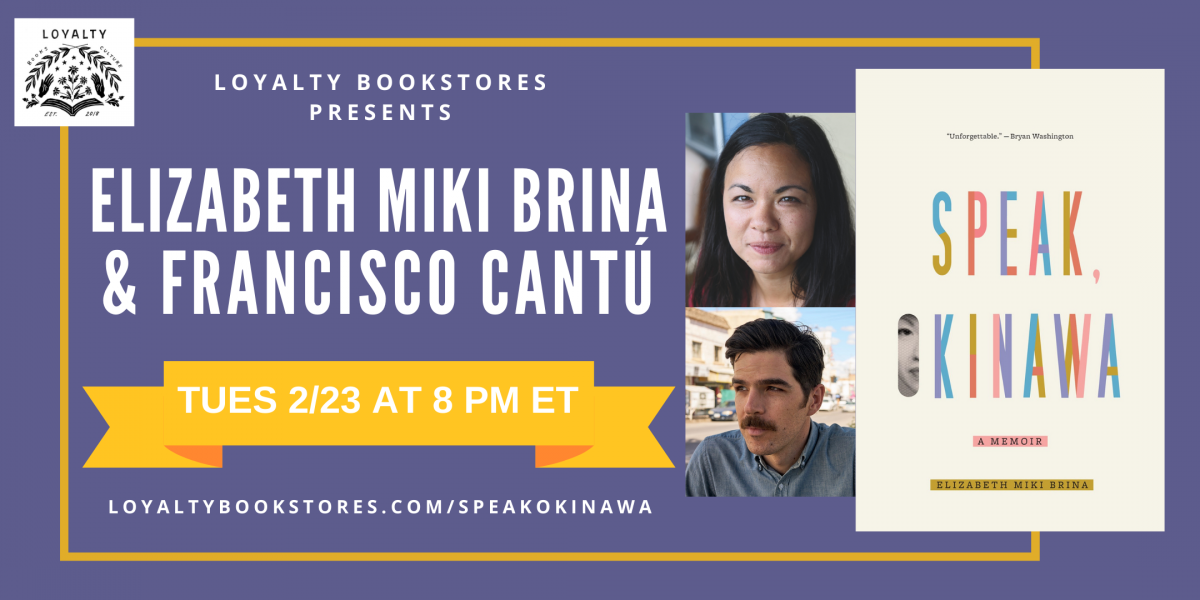 Join us in celebrating the release of Speak, Okinawa with Elizabeth Miki Brina and Francisco Cantú! Speak, Okinawa is one of our most anticipated memoirs of 2021 and we are so excited to share this book with you! This event will be held digitally via Crowdcast. Click here to register for the event with a donation of any amount of your choice. Donations will go to Black Lives Matter DC. You can order the book on our website to be automatically registered for the event, and there will also be an option to get the book during the event.

"In Speak, Okinawa, Elizabeth Miki Brina beautifully combs a lifetime of memory, love, loss, and the connections that bind us to one another. In exploring how one comes to be, Brina’s prose illuminates and dazzles—and we see, in the end, what was intangible made clear in her writing. Speak, Okinawa is indelible, and Brina’s words are unforgettable.” —Bryan Washington, author of Memorial

A searing, deeply candid memoir about a young woman's journey to understanding her complicated parents--her mother an Okinawan war bride, her father a Vietnam veteran--and her own, fraught cultural heritage.

Elizabeth's mother was working as a nightclub hostess on U.S.-occupied Okinawa when she met the American soldier who would become her husband. The language barrier and power imbalance that defined their early relationship followed them to the predominantly white, upstate New York suburb where they moved to raise their only daughter. There, Elizabeth grew up with the trappings of a typical American childhood and adolescence. Yet even though she felt almost no connection to her mother's distant home, she also felt out of place among her peers. Decades later, Elizabeth comes to recognize the shame and self-loathing that haunt both her and her mother, and attempts a form of reconciliation, not only to come to terms with the embattled dynamics of her family but also to reckon with the injustices that reverberate throughout the history of Okinawa and its people. Clear-eyed and profoundly humane, Speak, Okinawa is a startling accomplishment--a heartfelt exploration of identity, inheritance, forgiveness, and what it means to be an American.

Elizabeth Miki Brina is the recipient of a Rona Jaffe Bread Loaf Scholarship and a New York State Summer Writers Institute Scholarship. She currently lives and teaches in New Orleans.

Francisco Cantú is a writer, translator, and the author of The Line Becomes a River, winner of the 2018 Los Angeles Times Book Prize and a finalist for the National Book Critics Circle Award in nonfiction. A former Fulbright fellow, he has been the recipient of a Pushcart Prize, a Whiting Award, and an Art for Justice fellowship. His writing and translations have been featured in The New Yorker, Best American Essays, Harper’s, and VQR, as well as on This American Life. A lifelong resident of the Southwest, he now lives in Tucson, where he coordinates the Field Studies in Writing Program at the University of Arizona.

The Line Becomes a River: Dispatches from the Border (Paperback)