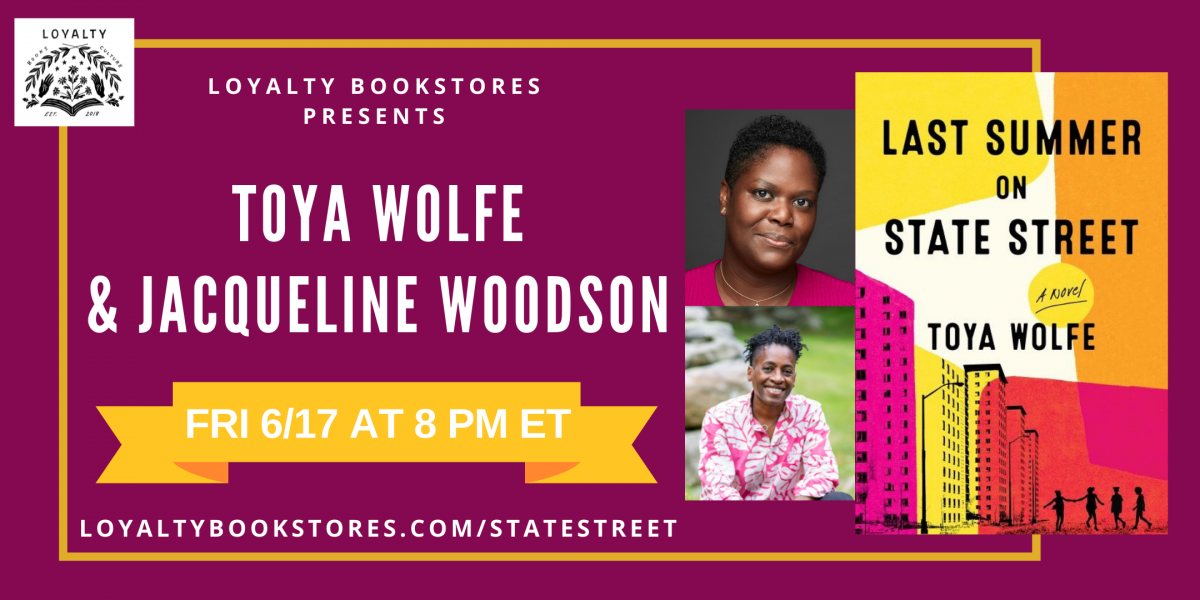 Loyalty is overjoyed to welcome Toya Wolfe and Jacqueline Woodson for a celebration of Last Summer on State Street! This event will be held digitally via Crowdcast. Click here to register for the event with a donation of any amount of your choice. You can also order the book below to be added to the event's registration list. Donations will go to BLM DC. There will also be an option to snag the book during the event.

For fans of Jacqueline Woodson and Brit Bennett, a striking coming-of-age debut about friendship, community, and resilience, set in the housing projects of Chicago during one life-changing summer.

"Toya Wolfe is a storyteller of the highest order. Last Summer on State Street is a stunning debut."—Rebecca Makkai, New York Times bestselling author of The Great Believers

Even when we lose it all, we find the strength to rebuild.

Felicia “Fe Fe” Stevens is living with her vigilantly loving mother and older teenaged brother, whom she adores, in building 4950 of Chicago’s Robert Taylor Homes. It’s the summer of 1999, and her high-rise is next in line to be torn down by the Chicago Housing Authority. She, with the devout Precious Brown and Stacia Buchanan, daughter of a Gangster Disciple Queen-Pin, form a tentative trio and, for a brief moment, carve out for themselves a simple life of Double Dutch and innocence. But when Fe Fe welcomes a mysterious new friend, Tonya, into their fold, the dynamics shift, upending the lives of all four girls.

As their beloved neighborhood falls down around them, so too do their friendships and the structures of the four girls’ families. Fe Fe must make the painful decision of whom she can trust and whom she must let go. Decades later, as she remembers that fateful summer—just before her home was demolished, her life uprooted, and community forever changed—Fe Fe tries to make sense of the grief and fraught bonds that still haunt her and attempts to reclaim the love that never left.

Profound, reverent, and uplifting, Last Summer on State Street explores the risk of connection against the backdrop of racist institutions, the restorative power of knowing and claiming one’s own past, and those defining relationships which form the heartbeat of our lives. Interweaving moments of reckoning and sustaining grace, debut author Toya Wolfe has crafted an era-defining story of finding a home — both in one’s history and in one’s self.

Toya Wolfe grew up in the Robert Taylor Homes in Chicago’s South Side. She earned an MFA in Creative Writing at Columbia College Chicago. Her writing has appeared in African Voices, Chicago Journal, Chicago Reader, Hair Trigger 27, and WarpLand. She is the recipient of the Zora Neale Hurston-Bessie Head Fiction Award, the Union League Civic & Arts Foundation Short Story Competition, and the Betty Shifflet/John Schultz Short Story Award. She currently resides in Chicago. Last Summer on State Street is her debut novel.

Jacqueline Woodson is the recipient of a 2020 MacArthur Fellowship, the 2020 Hans Christian Andersen Award, the 2018 Astrid Lindgren Memorial Award, and the 2018 Children’s Literature Legacy Award, and she was the 2018–2019 National Ambassador for Young People’s Literature. Her New York Times bestselling memoir, Brown Girl Dreaming, won the National Book Award, as well as the Coretta Scott King Award, a Newbery Honor, and the NAACP Image Award. She also wrote the adult books Red at the Bone, a New York Times bestseller, and Another Brooklyn, a 2016 National Book Award finalist. Her dozens of books for young readers include Coretta Scott King Award and NAACP Image Award winner Before the Ever After, New York Times bestsellers The Year We Learned to Fly, The Day You Begin, and Harbor Me, Newbery Honor winners Feathers, Show Way, and After Tupac and D Foster, and the picture book Each Kindness, which won the Jane Addams Children’s Book Award.

Red at the Bone: A Novel (Paperback)

Another Brooklyn: A Novel (Paperback)