Jason Reynolds, Raúl the Third, and Jerry Craft for STUNTBOY, IN THE MEANTIME 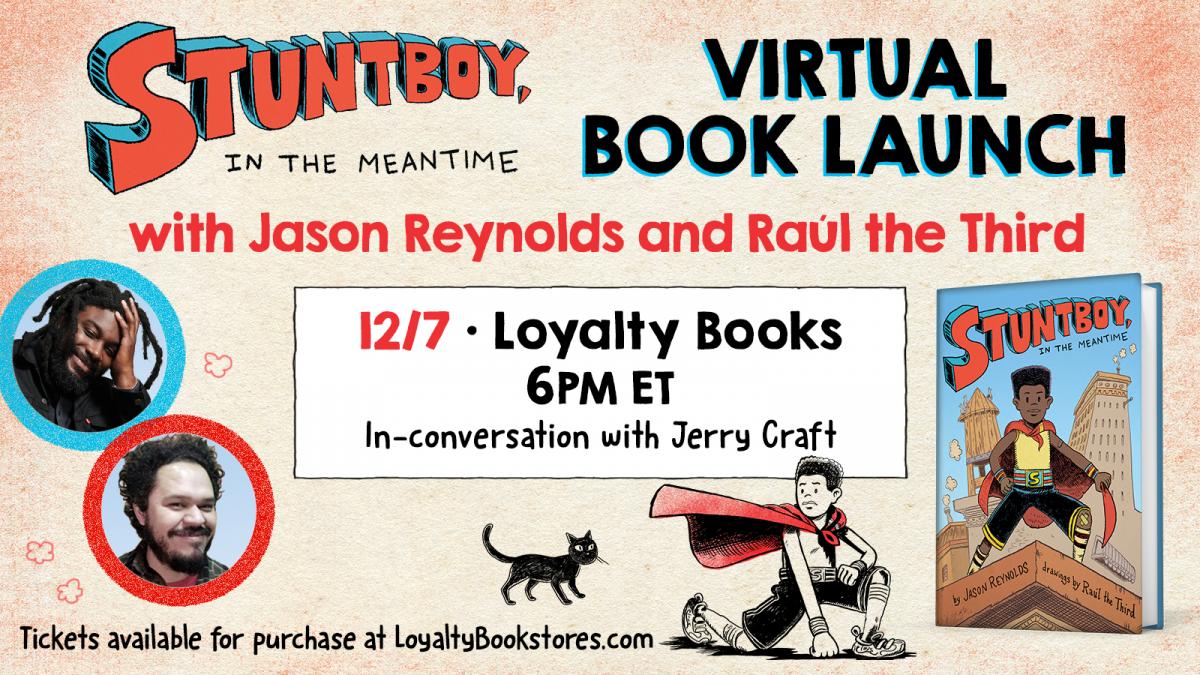 We are absolutely delighted to welcome Loyalty faves Jason Reynolds, Raúl the Third, and Jerry Craft to celebrate the release of Stuntboy, In the Meantime! This event will be held virtually via Crowdcast. This is a ticketed event and you must purchase a copy of Stuntboy below to be registered for the event.

Portico Reeves’s superpower is making sure all the other superheroes—like his parents and two best friends—stay super. And safe. Super safe. And he does this all in secret. No one in his civilian life knows he’s actually…Stuntboy!

But his regular Portico identity is pretty cool, too. He lives in the biggest house on the block, maybe in the whole city, which basically makes it a castle. His mom calls where they live an apartment building. But a building with fifty doors just in the hallways is definitely a castle. And behind those fifty doors live a bunch of different people who Stuntboy saves all the time. In fact, he’s the only reason the cat, New Name Every Day, has nine lives.

All this is swell except for Portico’s other secret, his not-so-super secret. His parents are fighting all the time. They’re trying to hide it by repeatedly telling Portico to go check on a neighbor “in the meantime.” But Portico knows “meantime” means his parents are heading into the Mean Time which means they’re about to get into it, and well, Portico’s superhero responsibility is to save them, too—as soon as he figures out how.

Only, all these secrets give Portico the worry wiggles, the frets, which his mom calls anxiety. Plus, like all superheroes, Portico has an arch-nemesis who is determined to prove that there is nothing super about Portico at all.

Jason Reynolds is a #1 New York Times bestselling author of more than a dozen books for young people, including Look Both Ways: A Tale Told in Ten Blocks, All American Boys (with Brendan Kiely), Long Way Down, and Stamped: Racism, Antiracism, and You (with Ibram X. Kendi). The recipient of a Newbery Honor, a Printz Honor, an NAACP Image Award, and multiple Coretta Scott King honors, Reynolds is also the current National Ambassador for Young People’s Literature. He lives in Washington, DC.

Raúl the Third is an award-winning illustrator, author, and artist living in Boston. His work centers around the contemporary Mexican American experience and his memories of growing up in El Paso, Texas, and Ciudad Juárez, Mexico. Raúl contributed to the SpongeBob Comics series and illustrated the Texas Bluebonnet Award–winning Lowriders in Space and the Pura Belpré Award–winning Lowriders to the Center of the Earth, both written by Cathy Camper. His illustrations are also featured in the middle grade novel Stuntboy, in the Meantime by Jason Reynolds.

Jerry Craft is a New York Times bestselling author-illustrator who has worked on numerous picture books, graphic novels, and middle grade novels, including the Newbery award-winning graphic novel, New Kid. Jerry is the creator of Mama’s Boyz, an award-winning syndicated comic strip. He has won five African American Literary Awards and is a cofounder of the Schomburg Center’s Annual Black Comic Book Festival. He received his BFA from the School of Visual Arts and now lives in Connecticut. Visit him online at www.jerrycraft.com.

Stuntboy, in the Meantime (Hardcover)

Lowriders to the Center of the Earth (Paperback)

Lowriders Blast from the Past (Paperback)

New Kid Sketchbook: A Place for Your Cartoons, Doodles, and Stories (Diary)