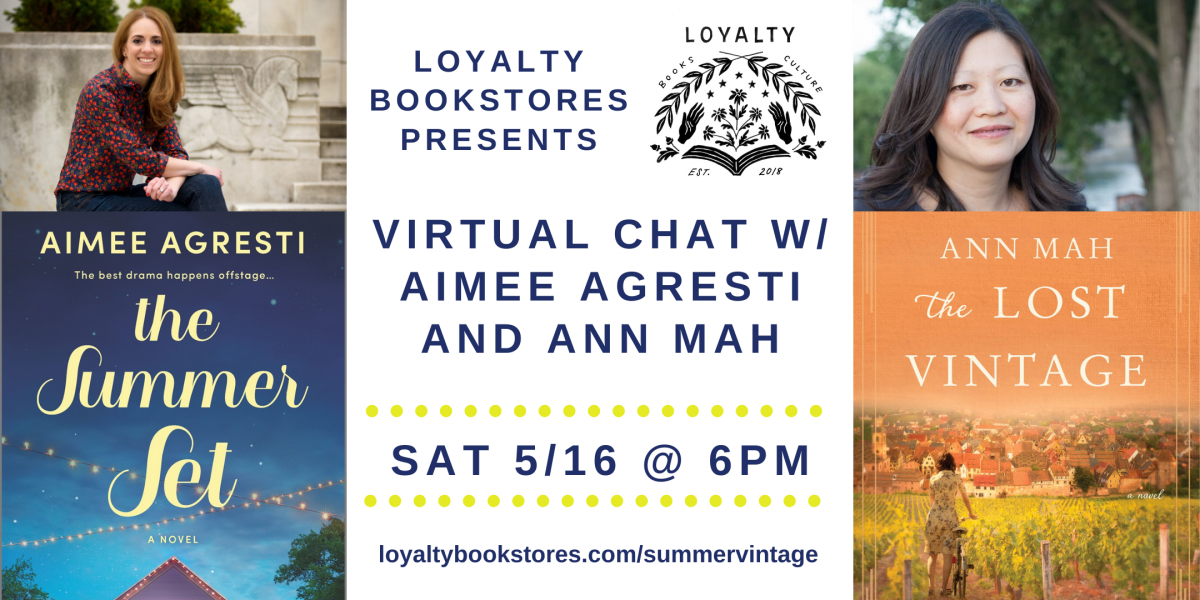 Join us for a wonderful conversation with authors Aimee Agresti and Ann Mah in celebration of Agresti's new novel The Summer Set! This event is free and open to the public, or you can purchase a book and receive a signed book plate. RSVP via the ticket link below to get the link and password to the digital event.

ABOUT THE BOOK: SUMMER SET

The best drama happens offstage in this undeniably charming novel about an idyllic summer theater where hot stars, has-beens and hopefuls chase roles--and each other.

Charlie Savoy was once Hollywood's hottest A-lister. Now, ten years later, she's pushing forty, exiled from the film world and back at the summer Shakespeare theater in the Berkshires that launched her career--and where her old flame, Nick, is the artistic director.

It's not exactly her first choice. But as parts are cast and rehearsals begin, Charlie is surprised to find herself getting her groove back, bonding with celebrity actors, forging unexpected new friendships and even reigniting her spark with Nick, who still seems to bring out the best in her despite their complicated history.

Until Charlie's old rival, Hollywood's current It Girl, is brought on set, threatening to undo everything she's built. As the drama amps up both on the stage and behind the curtains, Charlie must put on the show of a lifetime to fight for the second chance she deserves in career and in love.

"A page-turner set in the intoxicating theater world, The Summer Set considers the price of fame, the power of second chances and the enduring nature of love. A truly enjoyable read!" --Elyssa Friedland, author of The Floating Feldmans

Aimee Agresti is the author of Campaign Widows and The Gilded Wings trilogy for young adults. A former staff writer for Us Weekly, she penned the magazine's coffee table book Inside Hollywood. Aimee's work has also appeared in People, Premiere, DC magazine, Capitol File, the Washington Post, Washingtonian, the Washington City Paper, Boston magazine, Women's Health and the New York Observer, and she has made countless TV and radio appearances, dishing about celebrities on the likes of Access Hollywood, Entertainment Tonight, E!, The Insider, Extra, VH1, MSNBC, Fox News Channel and HLN. Aimee graduated from Northwestern University with a degree in journalism and lives with her husband and two sons in the Washington, DC, area.

ABOUT OUR CONVERSATION PARTNER

Ann Mah is a food and travel writer based in Paris and Washington DC. She is the author of the food memoir Mastering the Art of French Eating, and a novel, Kitchen Chinese. She regularly contributes to the New York Times' Travel section and she has written for Condé Nast Traveler, Vogue.com, BonAppetit.com, Washingtonian magazine, and other media outlets.

Sweetbitter meets The Nightingale in this page-turning novel about a woman who returns to her family's ancestral vineyard in Burgundy and unexpectedly uncovers a lost diary, an unknown relative, and a secret her family has been keeping since World War II.

To become one of only a few hundred certified wine experts in the world, Kate must pass the notoriously difficult Master of Wine examination. She's failed twice before; her third attempt will be her last chance. Suddenly finding herself without a job and with the test a few months away, she travels to Burgundy to spend the fall at the vineyard estate that has belonged to her family for generations. There she can bolster her shaky knowledge of Burgundian vintages and reconnect with her cousin Nico and his wife, Heather, who now oversee day-to-day management of the grapes. The one person Kate hopes to avoid is Jean-Luc, a talented young winemaker and her first love.

At the vineyard house, Kate is eager to help her cousin clean out the enormous basement that is filled with generations of discarded and forgotten belongings. Deep inside the cellar, behind a large armoire, she discovers a hidden room containing a cot, some Resistance pamphlets, and an enormous cache of valuable wine. Piqued by the secret space, Kate begins to dig into her family's history--a search that takes her back to the dark days of World War II and introduces her to a relative she never knew existed, a great-half aunt who was a teenager during the Nazi occupation.

As she learns more about her family, the line between resistance and collaboration blurs, driving Kate to find the answers to two crucial questions: Who, exactly, did her family aid during the difficult years of the war? And what happened to six valuable bottles of wine that seem to be missing from the cellar's collection?

The Lost Vintage: A Novel (Paperback)