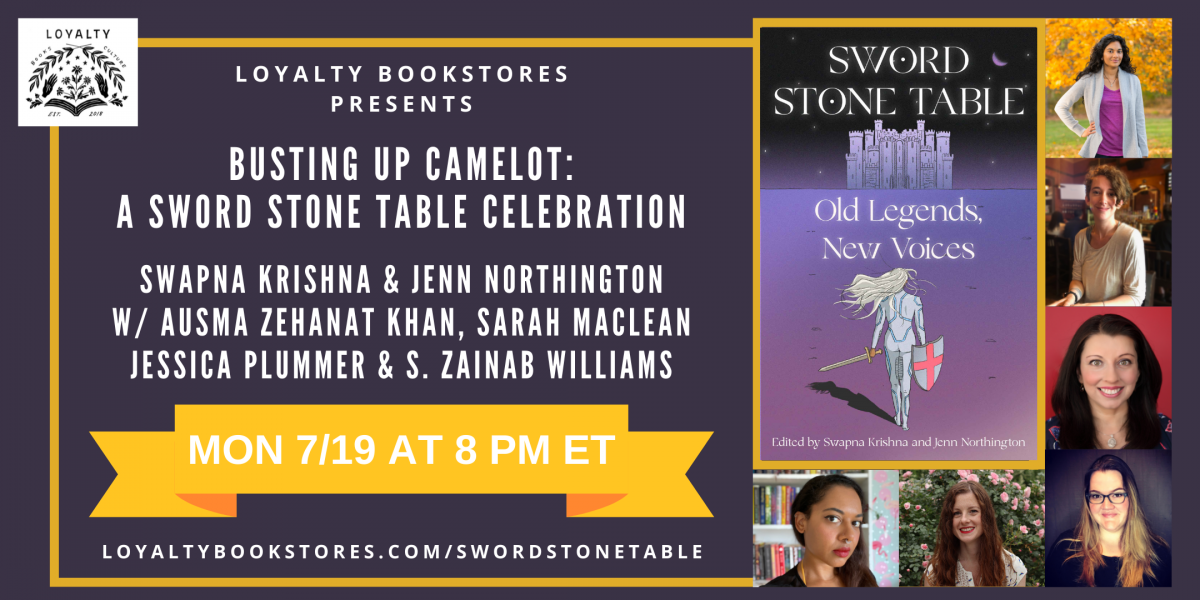 Join us for Busting Up Camelot: A Sword Stone Table Celebration with editors Swapna Krishna & Jenn Northington in conversation with Ausma Zehanat Khan, Sarah MacLean, Jessica Plummer, and S. Zainab Williams! This event will be held digitally via Crowdcast. Click here to register for the event with a donation of any amount of your choice or you can order the book below to be added to the event's registration list. Donations will go to Stop AAPI Hate. There will also be an option to snag the book during the event.

From the vast lore surrounding King Arthur, Camelot, and the Knights of the Round Table, comes an anthology of gender-bent, race-bent, LGBTQIA+ inclusive retellings. Featuring stories by:

Here you'll find the Lady of the Lake reimagined as an albino Ugandan sorceress and the Lady of Shalott as a wealthy, isolated woman in futuristic Mexico City; you'll see Excalibur rediscovered as a baseball bat that grants a washed-up minor leaguer a fresh shot at glory and as a lost ceremonial drum that returns to a young First Nations boy the power and the dignity of his people. There are stories set in Gilded Age Chicago, '80s New York, twenty-first century Singapore, and space; there are lesbian lady knights, Arthur and Merlin reborn in the modern era for a second chance at saving the world and falling in love--even a coffee shop AU.

Brave, bold, and groundbreaking, the stories in Sword Stone Table will bring fresh life to beloved myths and give long-time fans a chance to finally see themselves in their favorite legends.

Swapna Krishna is a space, technology, and pop culture writer and journalist. Her work has been published at Engadget, The Verge, Polygon, StarTrek.com, StarWars.com, The A.V. Club, and more. You can find her on Twitter at @skrishna.

Jenn Northington is a former bookseller and a current reviewer, podcaster, and editor with Riot New Media Group. She's a lifelong book nerd and can be found primarily on Instagram at @iamjennIRL.

ABOUT THE IN CONVERSATION PARTNERS/PANELISTS

New York Times, Washington Post & USA Today bestseller Sarah MacLean is the author of historical romance novels that have been translated into more than twenty languages. Sarah is a leading advocate for the romance genre, speaking widely on its place at the nexus of gender and cultural studies. A romance columnist and co-host of the weekly romance novel podcast, Fated Mates, her work in support of romance and those who read it earned her a place on Jezebel.com's Sheroes list and led Entertainment Weekly to call her "the elegantly fuming, utterly intoxicating queen of historical romance." Sarah is a graduate of Smith College & Harvard University. She lives in New York City.

Ausma Zehanat Khan holds a Ph.D. in international human rights law with a specialization in military intervention and war crimes in the Balkans. She writes the award-winning Esa Khattak/Rachel Getty mystery series, and the critically acclaimed Khorasan Archives fantasy series. A Deadly Divide and The Bladebone are her latest books, with her new Blackwater Falls crime series premiering in 2022. A British-born Canadian and former adjunct law professor, Khan now lives in Colorado with her husband.

Jessica Plummer works in publishing and is a Contributing Editor at Book Riot. She is an avid historian of both superhero comics and New York City, where she lives with her pet turtle. When not marketing books, writing about books, or reading books, she's writing them, or else probably running or baking. She firmly believes every movie should be a musical. "Flat White" is her first published fiction. You can find her on Twitter at @jess_plummer.

S. Zainab Williams is the executive director of content at Book Riot and a co-host of the SFF Yeah! podcast. She is also a member of PEN America’s Literary Awards Committee. A writer and cartoonist, her work can be found in (Don’t) Call Me Crazy, and on the Drabblecast, among other places. Originally from Los Angeles (Eagle Rock, represent), Sharifah currently lives in Portland, Oregon with her demonic cat.