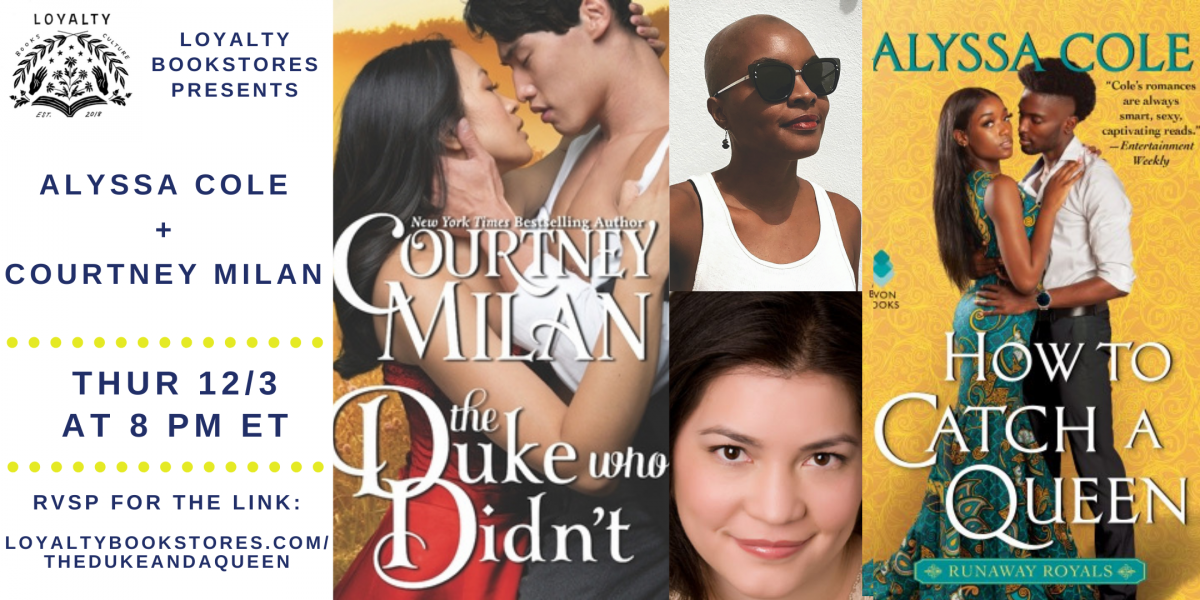 We are so excited to celebrate the release of How to Catch a Queen and The Duke Who Didn't with Alyssa Cole and Courtney Milan! This is a not to be missed event fellow citizens of Romancelandia! This event will be held digitally via Crowdcast. Register for the event via the button below for free to get the link and password, or you can register with a donation. Donations will go to Black Lives Matter DC. You can order the book below, and will automatically be registered for the event if you order it from our website, and there will also be an option to buy the book during the event! Email any questions to events@loyaltybookstores.com

How To Catch A Queen: An arranged marriage leads to unexpected desire, in the first book of Alyssa Cole’s Runaway Royals series…

When Shanti Mohapi weds the king of Njaza, her dream of becoming a queen finally comes true. But it’s nothing like she imagined. Shanti and her husband may share an immediate and powerful attraction, but her subjects see her as an outsider, and everything she was taught about being the perfect wife goes disastrously wrong.

A king must rule with an iron fist, and newly crowned King Sanyu was born perfectly fitted for the gauntlet, even if he wishes he weren’t. He agrees to take a wife as is required of him, though he doesn’t expect to actually fall in love. Even more vexing? His beguiling new queen seems to have the answers to his country’s problems—except no one will listen to her.

By day, they lead separate lives. By night, she wears the crown, and he bows to her demands in matters of politics and passion. When turmoil erupts in their kingdom and their marriage, Shanti goes on the run, and Sanyu must learn whether he has what it takes both to lead his people and to catch his queen.

The Duke Who Didn't: Miss Chloe Fong has plans for her life, lists for her days, and absolutely no time for nonsense. Three years ago, she told her childhood sweetheart that he could talk to her once he planned to be serious. He disappeared that very night.Except now he's back. Jeremy Wentworth, the Duke of Lansing, has returned to the tiny village he once visited with the hope of wooing Chloe. In his defense, it took him years of attempting to be serious to realize that the endeavor was incompatible with his personality.All he has to do is convince Chloe to make room for a mischievous trickster in her life, then disclose that in all the years they've known each other, he's failed to mention his real name, his title... and the minor fact that he owns her entire village.Only one thing can go wrong: Everything.

Alyssa Cole is a New York Times and USA Today Bestselling author of romance (historical, contemporary, and sci-fi) and thrillers. Her Civil War-set espionage romance An Extraordinary Union was the American Library Association’s RUSA Best Romance for 2018, and A Princess in Theory was one of the New York Times’ 100 Notable Books of 2018. She’s contributed to publications including Bustle, Shondaland, The Toast, Vulture, RT Book Reviews, and Heroes and Heartbreakers, and her books have received critical acclaim from The New York Times, Library Journal, BuzzFeed, Kirkus, Booklist, Jezebel, Vulture, Book Riot, Entertainment Weekly, and various other outlets. When she’s not working, she can usually be found watching anime or wrangling her pets.

Courtney Milan writes books about carriages, corsets, and smartwatches. Her books have received starred reviews in Publishers Weekly, Library Journal, and Booklist. She is a New York Times and a USA Today Bestseller. She lives in the Rocky Mountains with her husband and an exceptionally perfect dog. Before she started writing romance, Courtney got a graduate degree in theoretical physical chemistry from UC Berkeley. After that, just to shake things up, she went to law school at the University of Michigan and graduated summa cum laude. Then she did a handful of clerkships. She was a law professor for a while. She now writes full-time.

The Duke Who Didn't (Paperback)