Maurice Carlos Ruffin and Robert Jones, Jr. for THE ONES WHO DON'T SAY THEY LOVE YOU 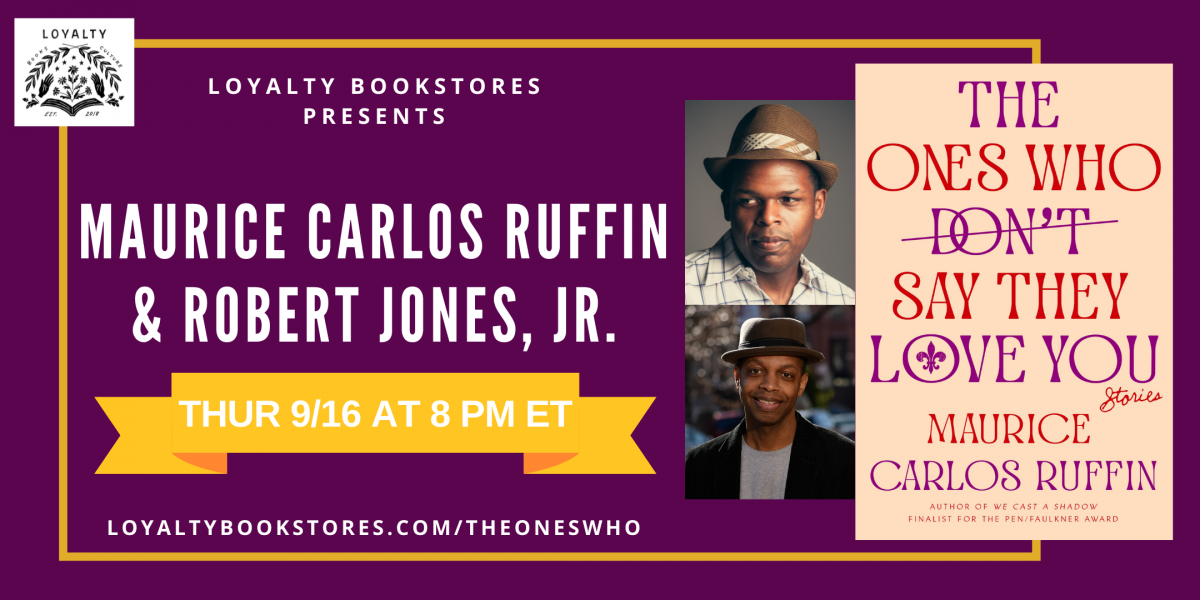 Loyalty is so so excited to celebrate The Ones Who Don't Say They Love You with Loyalty faves Maurice Carlos Ruffin and Robert Jones, Jr.! This event will be held digitally via Crowdcast. Click here to register for the event with a donation of any amount of your choice or you can order the book below to be added to the event's registration list. Donations will go to BLM DC. There will also be an option to snag the book during the event.

A collection of raucous stories that offer a "vibrant and true mosaic" (The New York Times) of New Orleans, from the critically acclaimed author of We Cast a Shadow

"Every sentence is both something that makes you want to laugh in a gut-wrenching way and threatens to break your heart in a way that you did not anticipate."--Robert Jones, Jr., author of The Prophets, in The Wall Street Journal

Maurice Carlos Ruffin has an uncanny ability to reveal the hidden corners of a place we thought we knew. These perspectival, character-driven stories center on the margins and are deeply rooted in New Orleanian culture.

In "Beg Borrow Steal," a boy relishes time spent helping his father find work after coming home from prison; in "Ghetto University," a couple struggling financially turns to crime after hitting rock bottom; in "Before I Let Go," a woman who's been in NOLA for generations fights to keep her home; in "Fast Hands, Fast Feet," an army vet and a runaway teen find companionship while sleeping under a bridge; in "Mercury Forges," a flash fiction piece among several in the collection, a group of men hurriedly make their way to an elderly gentleman's home, trying to reach him before the water from Hurricane Katrina does; and in the title story, a young man works the street corners of the French Quarter, trying to achieve a freedom not meant for him.

These stories are intimate invitations to hear, witness, and imagine lives at once regional but largely universal, and undeniably New Orleanian, written by a lifelong resident of New Orleans and one of our finest new writers.

Maurice Carlos Ruffin is the author of We Cast a Shadow, which was a finalist for the PEN/Faulkner Award, the PEN/Open Book Award, and the Dayton Literary Peace Prize and longlisted for the Center for Fiction First Novel Prize and International Dublin Literary Award. A recipient of an Iowa Review Award in fiction, he has been published in the Virginia Quarterly Review, AGNI, the Kenyon Review, The Massachusetts Review, and Unfathomable City: A New Orleans Atlas. A native of New Orleans, he is a graduate of the University of New Orleans Creative Writing Workshop and a member of the Peauxdunque Writers Alliance.

Robert Jones, Jr. is author of the New York Times Instant Bestselling novel, The Prophets. He has written for numerous publications, including The New York Times, Essence, and The Paris Review. He is the creator and curator of the social-justice, social-media community Son of Baldwin, which has over 285,000 followers across platforms.

The Ones Who Don't Say They Love You: Stories (Hardcover)

We Cast a Shadow: A Novel (Paperback)