Robert Jones, Jr. and Alexander Chee for THE PROPHETS 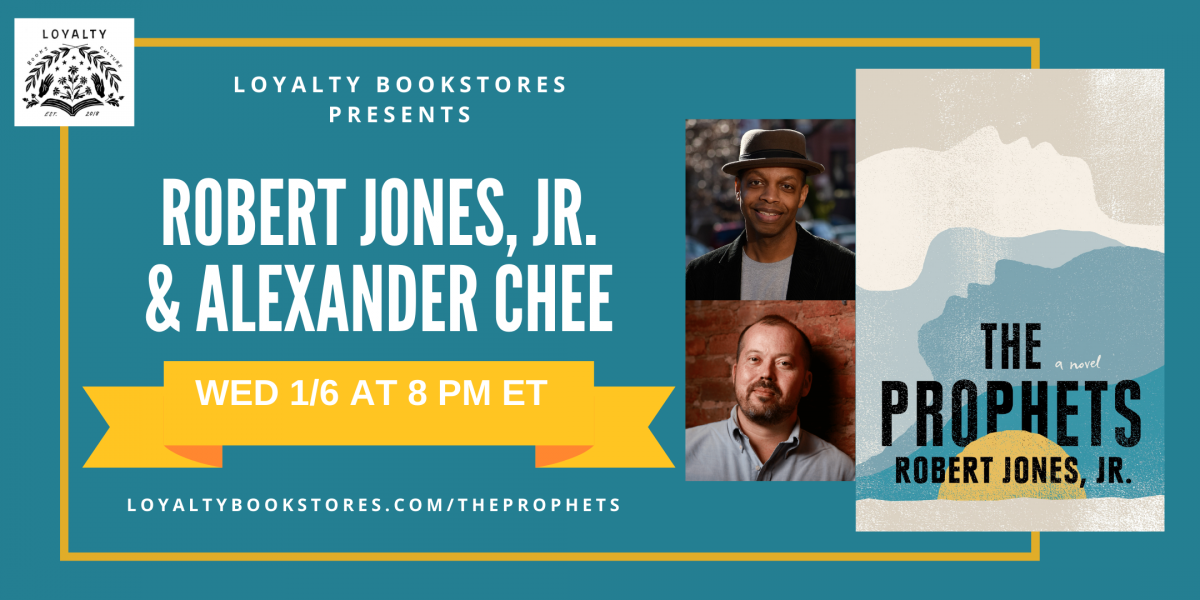 We are THRILLED to host Robert Jones, Jr. and Alexander Chee in conversation for the release of The Prophets! Seriously these are two of our favorite people and we cannot wait for y'all to experience this not to be missed event! This event will be held digitally via Crowdcast. Click here to register for the event with a donation of any amount of your choice. Donations will go to Black Lives Matter DC. You can order the book below and there will also be an option to buy the book during the event.

A singular and stunning debut novel about the forbidden union between two enslaved young men on a Deep South plantation, the refuge they find in each other, and a betrayal that threatens their existence.

Isaiah was Samuel's and Samuel was Isaiah's. That was the way it was since the beginning, and the way it was to be until the end. In the barn they tended to the animals, but also to each other, transforming the hollowed-out shed into a place of human refuge, a source of intimacy and hope in a world ruled by vicious masters. But when an older man--a fellow slave--seeks to gain favor by preaching the master's gospel on the plantation, the enslaved begin to turn on their own. Isaiah and Samuel's love, which was once so simple, is seen as sinful and a clear danger to the plantation's harmony.

With a lyricism reminiscent of Toni Morrison, Robert Jones, Jr., fiercely summons the voices of slaver and enslaved alike, from Isaiah and Samuel to the calculating slave master to the long line of women that surround them, women who have carried the soul of the plantation on their shoulders. As tensions build and the weight of centuries--of ancestors and future generations to come--culminates in a climactic reckoning, The Prophets masterfully reveals the pain and suffering of inheritance, but is also shot through with hope, beauty, and truth, portraying the enormous, heroic power of love.

Robert Jones, Jr., was born and raised in New York City. He received his BFA in creative writing with honors and MFA in fiction from Brooklyn College. He has written for numerous publications, including The New York Times, Essence, OkayAfrica, The Feminist Wire, and The Grio. He is the creator of the social justice social media community Son of Baldwin. Jones was recently featured in T Magazine's cover story, "Black Male Writers of Our Time." The Prophets is his debut novel.

Alexander Chee is the author of the novels Edinburgh and The Queen of the Night, and the essay collection How To Write An Autobiographical Novel, all from Houghton Mifflin Harcourt. He is a contributing editor at The New Republic, and an editor at large at VQR. His essays and stories have appeared in The New York Times Magazine, T Magazine, The Sewaneee Review, The Yale Review, and Guernica, among others, and anthologized in the 2016 and 2019 Best American Essays. He is winner of a 2003 Whiting Award, a 2004 NEA Fellowship in prose and a 2010 MCCA Fellowship, The Randy Shilts Prize in gay nonfiction, the Paul Engle Prize, the 2018 One Story Magazine’s Mentor of the Year Award, and residency fellowships from the MacDowell Colony, the VCCA, Civitella Ranieri and Amtrak. He is an associate professor of English and Creative Writing at Dartmouth College.

How to Write an Autobiographical Novel: Essays (Paperback)

The Queen of the Night (Paperback)