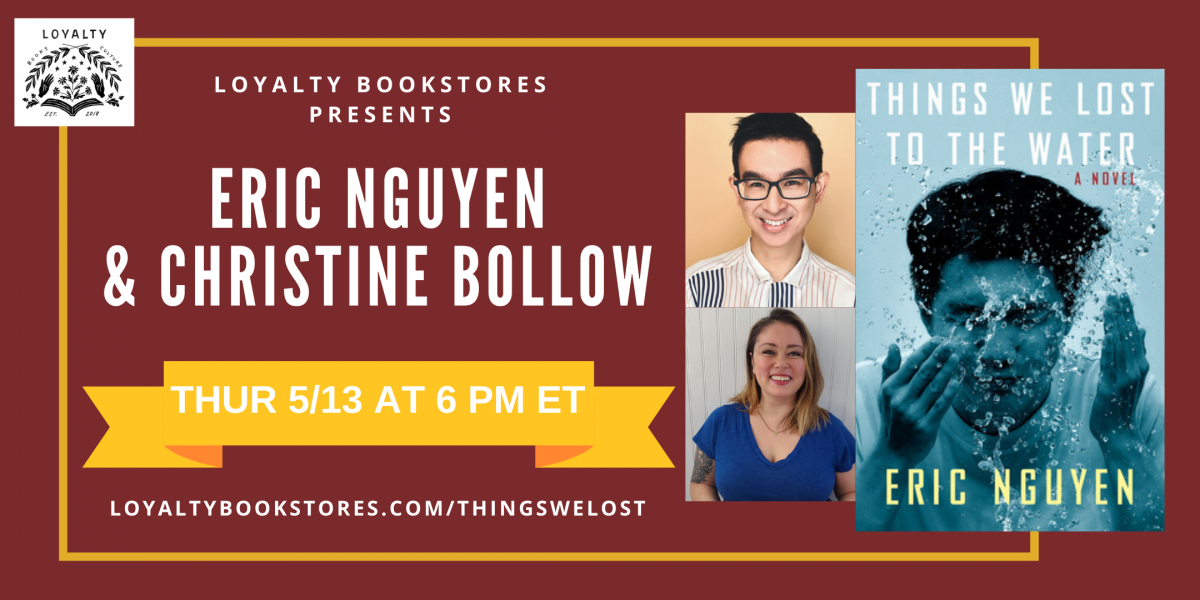 Loyalty is super pysched to celebrate the release of Things We Lost to the Water! Author Eric Nguyen will be in conversation with Loyalty's own Christine Bollow. This event will be held virtually on Crowdcast. Click here to register for the event with a donation of any amount of your choice. Donations will go to VAYLA New Orleans. You can also order the book below to be added to the event's registration list, and there will also be an option to get the book during the event. We also have a limited supply of signed bookplates available!

A stunning debut novel about an immigrant Vietnamese family who settles in New Orleans and struggles to remain connected to one another as their lives are inextricably reshaped.

“I was captivated. The writing is absolutely gorgeous . . . The voice is strong and this is a powerful novel . . . Well worth a read. Really enjoyed.”
—Roxane Gay, via Goodreads

“This is an elemental book, of water, for sure, but also of other elements of life, including love and loss. Vietnamese people know all about these elements, coming from a country whose entire length is bordered by a sea, and from a history saturated with loss. Love is one element that has enabled their survival, but sometimes at a cost. Eric Nguyen’s powerful novel ripples and gleams with the unpredictable flow and surge of love, which, like water, can drown us or sustain us. From a war to a hurricane, from an ocean to a flood, Things We Lost to the Water proves itself to be a novel that sustains us.”
—Viet Thanh Nguyen, Pulitzer Prize-winning author of The Sympathizer

When Huong arrives in New Orleans with her two young sons, she is jobless, homeless, and worried about her husband, Cong, who remains in Vietnam. As she and her boys begin to settle in to life in America, she continues to send letters and tapes back to Cong, hopeful that they will be reunited and her children will grow up with a father.

But with time, Huong realizes she will never see her husband again. While she attempts to come to terms with this loss, her sons, Tuan and Binh, grow up in their absent father's shadow, haunted by a man and a country trapped in their memories and imaginations. As they push forward, the three adapt to life in America in different ways: Huong gets involved with a Vietnamese car salesman who is also new in town; Tuan tries to connect with his heritage by joining a local Vietnamese gang; and Binh, now going by Ben, embraces his adopted homeland and his burgeoning sexuality. Their search for identity--as individuals and as a family--threatens to tear them apart, un­til disaster strikes the city they now call home and they are suddenly forced to find a new way to come together and honor the ties that bind them.

Eric Nguyen earned an MFA in Creative Writing from McNeese State University in Louisiana. He has been awarded fellowships from Lambda Literary, Voices of Our Nation Arts (VONA), and the Tin House Writers Workshop. He is the editor in chief of diaCRITICS.org. He lives in Washington, DC. Things We Lost to the Water is his first novel.

Christine Bollow is the Programs and Marketing Manager for Loyalty Bookstores and a Bookstagrammer @readingismagical. She serves on the ABA's Bookseller Advisory Committee and is a contributor for the Feminist Book Club Podcast. Christine's book recommendations have been featured in Buzzfeed Books and Elle.com and she was highlighted by Books Forward as one of 10 Bookstagrammers to Follow for Asian & Pacific American Heritage Month. She is a graduate of Barnard College.

Things We Lost to the Water: A novel (Hardcover)