Anna Malaika Tubbs and Traci Thomas for THE THREE MOTHERS 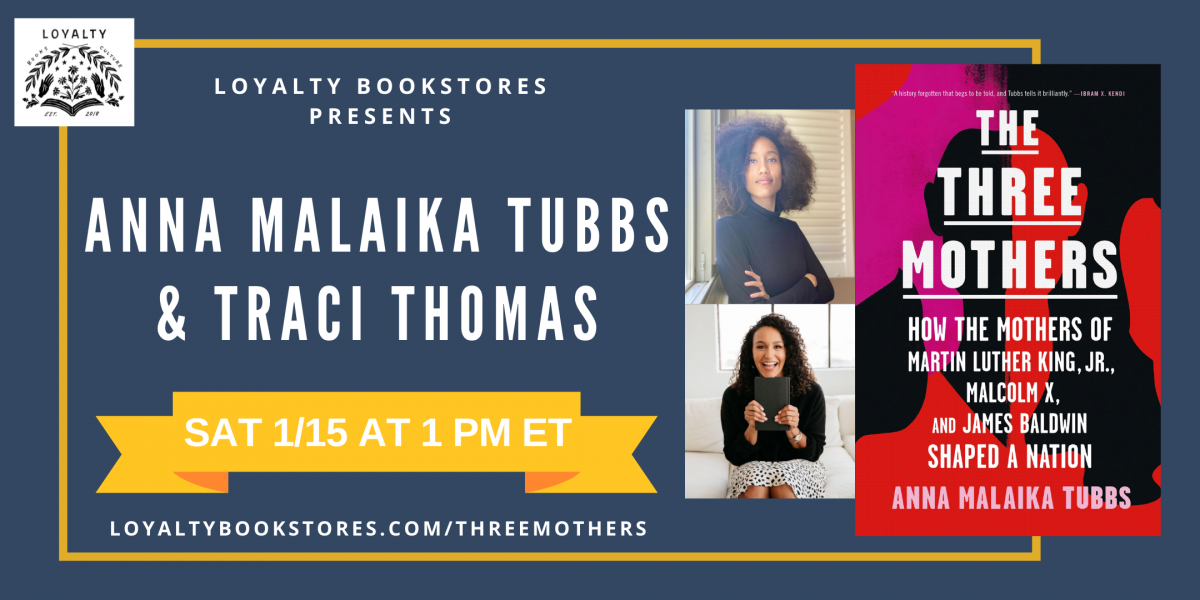 Loyalty is thrilled to celebrate the paperback release of The Three Mothers with Anna Malaika Tubbs and Traci Thomas! This event will be held digitally via Crowdcast. Click here to register for the event with a donation of any amount of your choice or you can order the book below to be added to the event's registration list. Donations will go to BLM DC. There will also be an option to snag the book during the event.

"Tubbs' connection to these women is palpable on the page — as both a mother and a scholar of the impact Black motherhood has had on America. Through Tubbs' writing, Berdis, Alberta, and Louise's stories sing. Theirs is a history forgotten that begs to be told, and Tubbs tells it brilliantly." — Ibram X. Kendi, #1 New York Times bestselling author of How to Be an Antiracist and National Book Award winner Stamped from the Beginning

Much has been written about Berdis Baldwin's son James, about Alberta King's son Martin Luther, and Louise Little's son Malcolm. But virtually nothing has been said about the extraordinary women who raised them. In her groundbreaking and essential debut The Three Mothers, scholar Anna Malaika Tubbs celebrates Black motherhood by telling the story of the three women who raised and shaped some of America's most pivotal heroes.

Berdis Baldwin, Alberta King, and Louise Little were all born at the beginning of the 20th century and forced to contend with the prejudices of Jim Crow as Black women. These three extraordinary women passed their knowledge to their children with the hope of helping them to survive in a society that would deny their humanity from the very beginning—from Louise teaching her children about their activist roots, to Berdis encouraging James to express himself through writing, to Alberta basing all of her lessons in faith and social justice. These women used their strength and motherhood to push their children toward greatness, all with a conviction that every human being deserves dignity and respect despite the rampant discrimination they faced.

These three mothers taught resistance and a fundamental belief in the worth of Black people to their sons, even when these beliefs flew in the face of America’s racist practices and led to ramifications for all three families’ safety. The fight for equal justice and dignity came above all else for the three mothers.

These women, their similarities and differences, as individuals and as mothers, represent a piece of history left untold and a celebration of Black motherhood long overdue.

Anna Malaika Tubbs is the author of the critically acclaimed book The Three Mothers: How the Mothers of Martin Luther King Jr., Malcolm X, and James Baldwin Shaped a Nation. After graduating Phi Beta Kappa from Stanford University with a BA in Anthropology, Anna earned her MA in Multidisciplinary Gender Studies and her Ph.D. in Sociology from the University of Cambridge as a Bill and Melinda Gates Cambridge Scholar. She is also an educator and DEI consultant. She lives with her husband, Michael Tubbs, and their son Michael Malakai.

Traci Thomas is the creator and host of The Stacks, a weekly podcast about books and reading. The Stacks was named one of the best podcasts of 2020 by Elle Magazine. The show features in depth interviews with authors, activistis, and other book lovers and uses books as a lens to better understand the world around us. Traci writes a monthly column at Shereads.com, and has shared her book recommendations on NPR, in Business Insider, and Millie Magazine.

The Three Mothers: How the Mothers of Martin Luther King, Jr., Malcolm X, and James Baldwin Shaped a Nation (Paperback)