Ryka Aoki and John Scalzi for LIGHT FROM UNCOMMON STARS 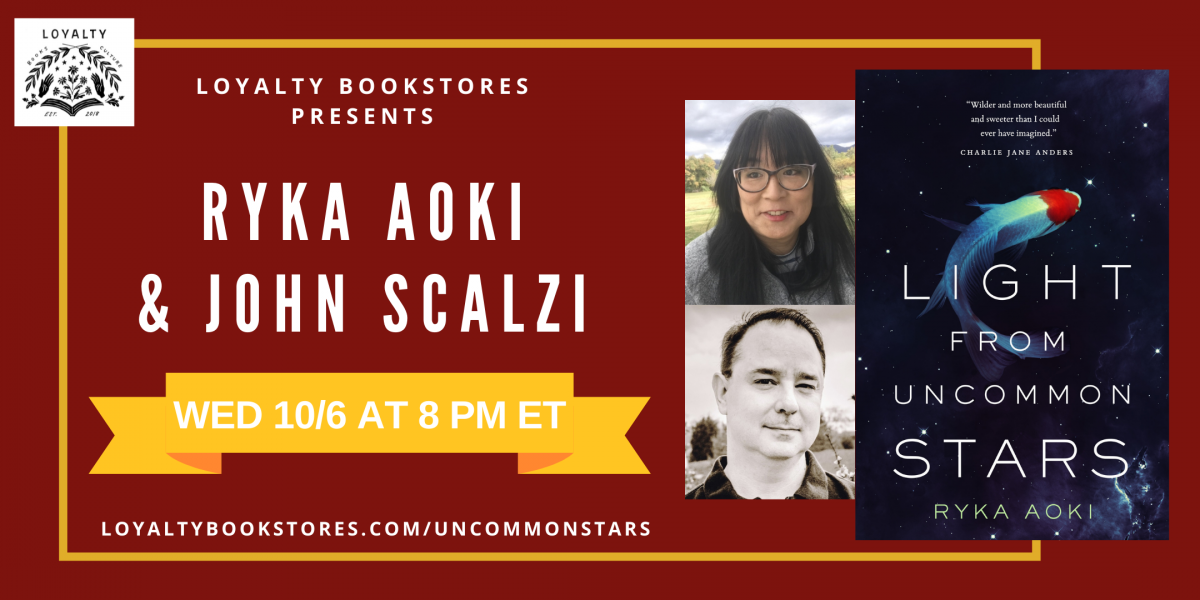 Loyalty is THRILLED to celebrate Light from Uncommon Stars with Ryka Aoki and John Scalzi, especially since Loyalty's Programs and Marketing Manager Christine is completely in love with this book! This event will be held digitally via Crowdcast. Click here to register for the event with a donation of any amount of your choice or you can order the book below to be added to the event's registration list. Donations will go to BLM DC. There will also be an option to snag the book during the event.

Shizuka Satomi made a deal with the devil: to escape damnation, she must entice seven other violin prodigies to trade their souls for success. She has already delivered six.

But in a donut shop off a bustling highway in the San Gabriel Valley, Shizuka meets Lan Tran, retired starship captain, interstellar refugee, and mother of four. Shizuka doesn't have time for crushes or coffee dates, what with her very soul on the line, but Lan's kind smile and eyes like stars might just redefine a soul's worth. And maybe something as small as a warm donut is powerful enough to break a curse as vast as the California coastline.

As the lives of these three women become entangled by chance and fate, a story of magic, identity, curses, and hope begins, and a family worth crossing the universe for is found.

RYKA AOKI (she/her) is a poet, composer, teacher, and novelist whose books include He Mele a Hilo and two Lambda Award finalists, Seasonal Velocities and Why Dust Shall Never Settle Upon This Soul. Ryka’s work has appeared or been recognized in publications including Vogue, Elle, Bustle, Autostraddle, PopSugar, and Buzzfeed. Her poetry was featured at the Smithsonian Asian Pacific American Center, and she was honored by the California State Senate for “extraordinary commitment to the visibility and well-being of Transgender people.”

JOHN SCALZI is one of the most popular SF authors of his generation. His debut Old Man's War won him the John W. Campbell Award for Best New Writer. His New York Times bestsellers include The Last Colony, Fuzzy Nation, and Redshirts (which won the 2013 Hugo Award for Best Novel), and 2020's The Last Emperox. Material from his blog, Whatever, has also earned him two other Hugo Awards. He lives in Ohio with his wife and daughter.