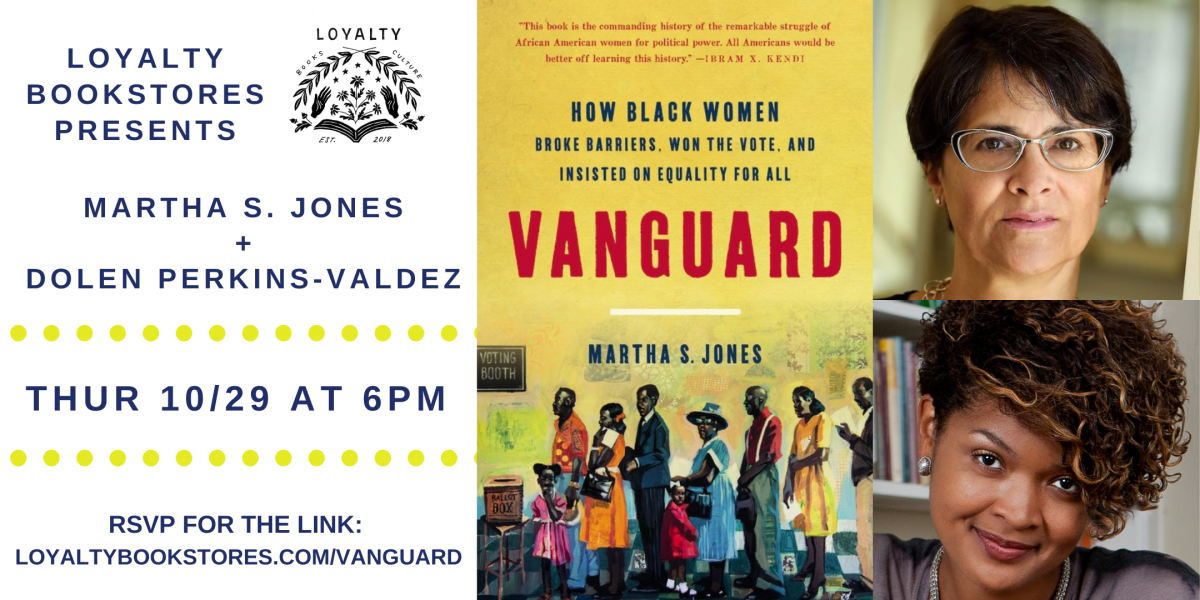 Join us in welcoming Dr. Martha S. Jones and Dolen Perkins-Valdez in conversation for Vanguard: How Black Women Broke Barriers, Won the Vote, and Insisted on Equality For All. Vanguard is the epic history of African American women's pursuit of political power and how it transformed America. With the recent 100th anniversary of the 19th Amendment ratification, this is sure to be a fascinating and engaging event! This event will be held digitally via Crowdcast. Click here to register for the event with a donation of any amount of your choice. Donations will go to Black Lives Matter DC. You can order the book below and there will also be an option to buy the book during the event.

In the standard story, the suffrage crusade began in Seneca Falls in 1848 and ended with the ratification of the Nineteenth Amendment in 1920. But this overwhelmingly white women's movement did not win the vote for most black women. Securing their rights required a movement of their own.

In Vanguard, acclaimed historian Martha S. Jones offers a new history of African American women's political lives in America. She recounts how they defied both racism and sexism to fight for the ballot, and how they wielded political power to secure the equality and dignity of all persons. From the earliest days of the republic to the passage of the 1965 Voting Rights Act and beyond, Jones excavates the lives and work of black women -- Maria Stewart, Frances Ellen Watkins Harper, Fannie Lou Hamer, and more -- who were the vanguard of women's rights, calling on America to realize its best ideals.

Dr. Martha S. Jones is a legal and cultural historian whose work examines how black Americans have shaped the story of American democracy. She is a Professor at Johns Hopkins University and author of Vanguard: How Black Women Broke Barriers, Won the Vote, and Insisted on Equality for All (2020), Birthright Citizens: A History of Race and Rights in Antebellum America (2018), and All Bound Up Together: The Woman Question in African American Public Culture 1830-1900 (2007). You can check out some of Martha's recent writing on Vanguard in TIME and New York Times. She was featured in the new PBS documentary American Experience: The Vote.

Dolen Perkins-Valdez is the author of the New York Times bestselling novel WENCH. In 2011, she was a finalist for two NAACP Image Awards and the Hurston-Wright Legacy Award for fiction. In 2017, HarperCollins released Wench as one of eight "Olive Titles," limited edition modern classics that included books by Edward P. Jones, Louise Erdrich, and Zora Neale Hurston. Dolen received a DC Commission on the Arts Grant for her second novel BALM which was published by HarperCollins in 2015.  In 2013, Dolen wrote the introduction to a special edition of Solomon Northup's Twelve Years a Slave, published by Simon & Schuster, which became a New York Times bestseller. She followed that with an introduction to Elizabeth Keckly's Behind the Scenes published in 2016.  Dolen is a 2021 nominee for a United States Artists Fellowship. Her third novel IF THIS IS PEACE will be published by Berkley Books/Penguin. Dolen serves as Chair of the board of the PEN/Faulkner Foundation. Over the last few years, she has been a frequent participant in their Writers in Schools program. On behalf of the foundation, she has visited nearly every public high school in the District of Columbia to discuss the importance of reading and writing.   She is currently Associate Professor in the Literature Department at American University.

Vanguard: How Black Women Broke Barriers, Won the Vote, and Insisted on Equality for All (Hardcover)

Birthright Citizens: A History of Race and Rights in Antebellum America (Studies in Legal History) (Paperback)