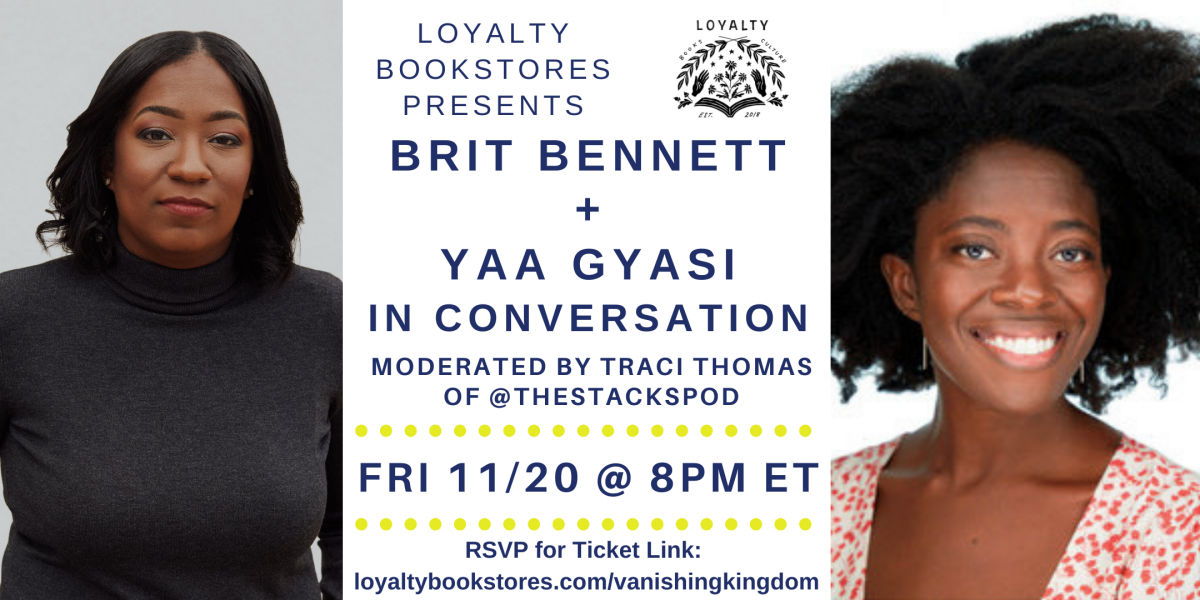 We are super psyched to host two literary legends in a special event with Brit Bennett and Yaa Gyasi in conversation, moderated by Traci Thomas of The Stacks Podcast! We'll be chatting about The Vanishing Half and Transcendent Kingdom, the craft of generational storytelling, and more. Brit and Yaa are seriously two of Loyalty's favorite authors and we know this will be such an amazing event! This event will be held digitally via Crowdcast. Click here to register for the event with a donation of any amount of your choice. Donations will go to Black Lives Matter DC. You can order their books below and there will also be an option to buy the books during the event.

The Vanishing Half: From The New York Times-bestselling author of The Mothers, a stunning new novel about twin sisters, inseparable as children, who ultimately choose to live in two very different worlds, one black and one white.

The Vignes twin sisters will always be identical. But after growing up together in a small, southern black community and running away at age sixteen, it's not just the shape of their daily lives that is different as adults, it's everything: their families, their communities, their racial identities. Many years later, one sister lives with her black daughter in the same southern town she once tried to escape. The other secretly passes for white, and her white husband knows nothing of her past. Still, even separated by so many miles and just as many lies, the fates of the twins remain intertwined. What will happen to the next generation, when their own daughters' storylines intersect?

Weaving together multiple strands and generations of this family, from the Deep South to California, from the 1950s to the 1990s, Brit Bennett produces a story that is at once a riveting, emotional family story and a brilliant exploration of the American history of passing. Looking well beyond issues of race, The Vanishing Half considers the lasting influence of the past as it shapes a person's decisions, desires, and expectations, and explores some of the multiple reasons and realms in which people sometimes feel pulled to live as something other than their origins.

Gifty is a sixth-year PhD candidate in neuroscience at the Stanford University School of Medicine studying reward-seeking behavior in mice and the neural circuits of depression and addiction. Her brother, Nana, was a gifted high school athlete who died of a heroin overdose after an ankle injury left him hooked on OxyContin. Her suicidal mother is living in her bed. Gifty is determined to discover the scientific basis for the suffering she sees all around her. But even as she turns to the hard sciences to unlock the mystery of her family's loss, she finds herself hungering for her childhood faith and grappling with the evangelical church in which she was raised, whose promise of salvation remains as tantalizing as it is elusive. Transcendent Kingdom is a deeply moving portrait of a family of Ghanaian immigrants ravaged by depression and addiction and grief--a novel about faith, science, religion, love. Exquisitely written, emotionally searing, this is an exceptionally powerful follow-up to Gyasi's phenomenal debut.

Born and raised in Southern California, Brit Bennett graduated from Stanford University and later earned her MFA in fiction at the University of Michigan, where she won a Hopwood Award in Graduate Short Fiction. In 2014, she received the Hurston/Wright Award for College Writers. She is a National Book Foundation 5 Under 35 honoree, and her debut novel The Mothers was a New York Times bestseller. Her second novel The Vanishing Half was an instant #1 New York Times bestseller. Her essays have been featured in The New Yorker, the New York Times Magazine, The Paris Review, and Jezebel.

Yaa Gyasi was born in Ghana and raised in Huntsville, Alabama. She holds a BA in English from Stanford University and an MFA from the Iowa Writers’ Workshop, where she held a Dean’s Graduate Research Fellowship. She lives in Brooklyn.

The Stacks is a podcast about books and the people who read them, hosted by Traci Thomas, a lover of all things literature. The Stacks uses books as a framework to discuss our cultural understanding of race, gender, politics, and what it means to be alive. The Stacks is also a place to simply gush over books and authors. In the show's two and a half year history, The Stacks has been thrilled to welcome a wide range of guests to the podcast including: Dr. Ibram X. Kendi, Bakari Sellers, Samantha Irby, Lori Gottlieb and Kiese Laymon. Traci was born and raised in Oakland, CA and now lives in LA with her husband and identical twin sons. You can find Traci Traci Thomas at  @TheStacksPod_ on Twitter, @TheStacksPod on Bookstagram, in addition to her podcast The Stacks.

The Vanishing Half: A Novel (Hardcover)

The Mothers: A Novel (Paperback)