Silvia Moreno-Garcia and S.A. Cosby for VELVET WAS THE NIGHT 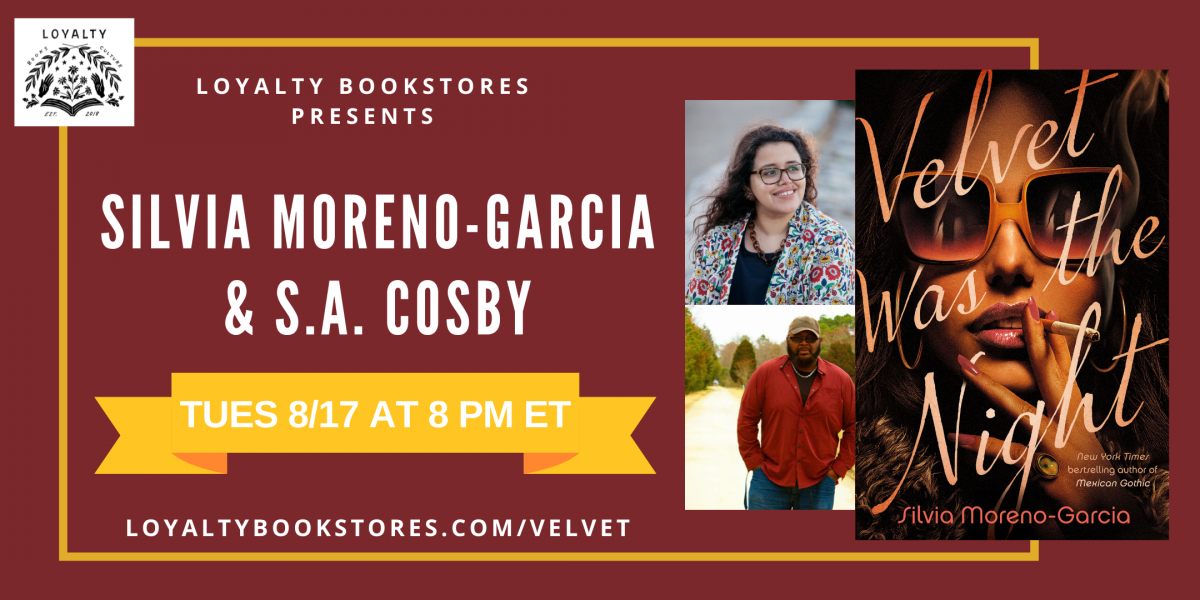 Loyalty is thrilled to welcome Silvia Moreno-Garcia in convo w/ S.A. Cosby for the launch event of Velvet Was the Night!! This event will be held digitally via Crowdcast. You can order the book below to be added to the event's registration list. Click here to register for the event with a donation of any amount of your choice; donations will go to BLM DC. There will also be an option to snag the book during the event. *Signed tip-in books available, while supplies last!*

1970s, Mexico City. Maite is a secretary who lives for one thing: the latest issue of Secret Romance. While student protests and political unrest consume the city, Maite escapes into stories of passion and danger.

Her next-door neighbor, Leonora, a beautiful art student, seems to live a life of intrigue and romance that Maite envies. When Leonora disappears under suspicious circumstances, Maite finds herself searching for the missing woman--and journeying deeper into Leonora's secret life of student radicals and dissidents.

Meanwhile, someone else is also looking for Leonora at the behest of his boss, a shadowy figure who commands goon squads dedicated to squashing political activists. Elvis is an eccentric criminal who longs to escape his own life: He loathes violence and loves old movies and rock 'n' roll. But as Elvis searches for the missing woman, he watches Maite from a distance--and comes to regard her as a kindred spirit who shares his love of music and the unspoken loneliness of his heart.

Now as Maite and Elvis come closer to discovering the truth behind Leonora's disappearance, they can no longer escape the danger that threatens to consume their lives, with hitmen, government agents, and Russian spies all aiming to protect Leonora's secrets--at gunpoint.

Velvet Was the Night is an edgy, simmering historical novel for lovers of smoky noirs and anti-heroes.

SILVIA MORENO-GARCIA is the New York Times bestselling author of the critically acclaimed speculative novels Mexican Gothic, Gods of Jade and Shadow, Signal to Noise, Certain Dark Things, and The Beautiful Ones; the crime novel Untamed Shore, and the forthcoming noir Velvet Was the Night. She has edited several anthologies, including the World Fantasy Award-winning She Walks in Shadows (aka Cthulhu's Daughters). She lives in Vancouver, British Columbia.

S. A. Cosby is an Anthony Award-winning writer from southeastern Virginia. His the bestselling author of Blacktop Wasteland, a New York Times Book Review Editors' Choice and Goodreads Choice Awards semifinalist, as well as Brotherhood of the Blade and My Darkest Prayer. When not writing, he is an avid hiker and chess player.

Velvet Was the Night (Hardcover)

The Beautiful Ones: A Novel (Paperback)