Akwaeke Emezi and Jason Reynolds for The Death of Vivek Oji 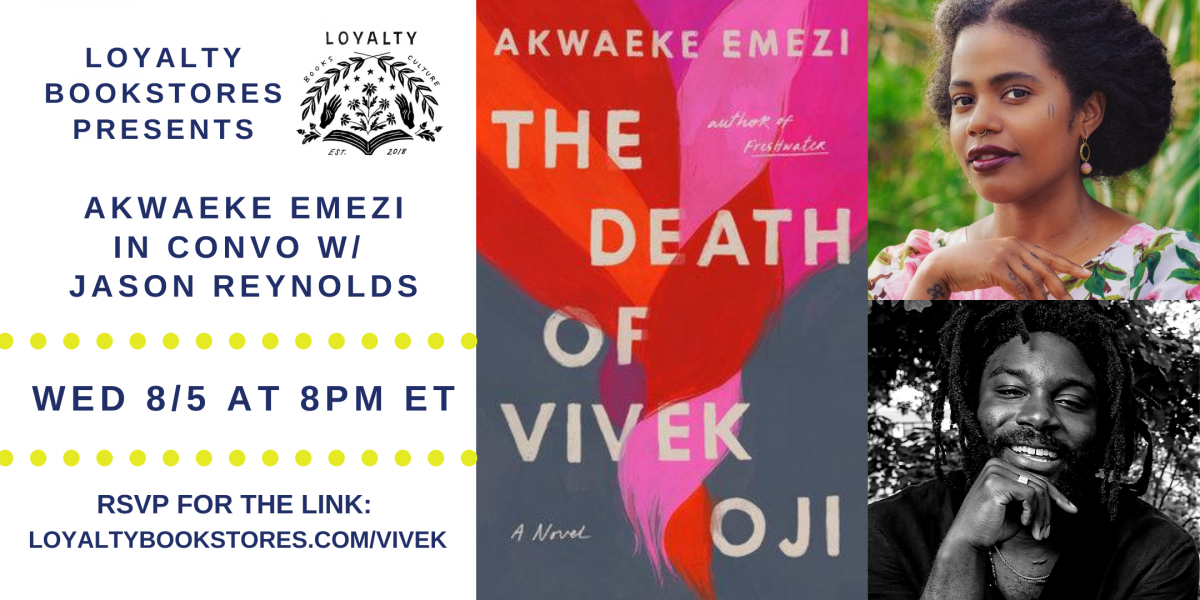 We are ridiculously excited to host a conversation with Akwaeke Emezi and Jason Reynolds in celebration of the release of Akwaeke Emezi's highly anticipated new book and staff favorite The Death of Vivek Oji! This is a convo not to be missed! This event will be held digitally via crowdcast. Click here to register for the event with a donation of any amount of your choice. Donations will go to Casa Ruby, a multicultural, bilingual, LGBTQ safe space providing food, shelter, and numerous other health-related services. You can pre-order the book below and there will also be an option to buy the book during the event.

They burned down the market on the day Vivek Oji died.

One afternoon, in a town in southeastern Nigeria, a mother opens her front door to discover her son’s body, wrapped in colorful fabric, at her feet. What follows is the tumultuous, heart-wrenching story of one family’s struggle to understanda child whose spirit is both gentle and mysterious. Raised by a distant father and a compassionate but overprotective mother, Vivek suffers disorienting blackouts, moments of disconnection between self and surroundings. As adolescence gives way to adulthood, Vivek finds solace in friendships with the warm, boisterous daughters of the Nigerwives, foreign-born women married to Nigerian men. But Vivek’s closest bond is with Osita, the worldly, high-spirited cousin whose teasing confidence masks a guarded private life. As their relationship deepens—and Osita struggles to understand Vivek’s escalating crisis—the mystery gives way to a heart-stopping act of violence in a moment of exhilarating freedom.

Propulsively readable, teeming with unforgettable characters, The Death of Vivek Oji is a novel of family and friendship that challenges expectations—a dramatic story of loss and transcendence that will move every reader.

Akwaeke Emezi is the author of the novel Freshwater, which was named a New York Times Notable Book and shortlisted for the PEN/Hemingway Award, the NYPL Young Lions Fiction Award, the Lambda Literary Award, and the Center for Fiction’s First Novel Prize, and longlisted for the International Dublin Literary Award, the Women’s Prize for Fiction, the Andrew Carnegie Medal for Excellence in Fiction, the Brooklyn Public Library Literary Prize, the Wellcome Book Prize, the Aspen Words Literary Prize, and the VCU Cabell First Novelist Award. Freshwater was also named a Best Book of the Year by The New Yorker, NPR, the Chicago Public Library, and BuzzFeed. Emezi’s second book, Pet, was a finalist for the National Book Award for Young People’s Literature. Selected as a 5 Under 35 honoree by the National Book Foundation, Emezi has been profiled by Vogue (for which they were photographed by Annie Leibovitz) and by Vanity Fair as part of “The New Hollywood Guard.” Freshwater has been translated into ten languages and is currently in development as a TV series at FX, with Emezi writing and executive producing with Tamara P. Carter.

Jason Reynolds is a #1 New York Times bestselling author, a Newbery Award Honoree, a Printz Award Honoree, a two-time National Book Award finalist, a Kirkus Award winner, a two-time Walter Dean Myers Award winner, an NAACP Image Award Winner, and the recipient of multiple Coretta Scott King honors. Reynolds is also the 2020–2021 National Ambassador for Young People’s Literature. His many books include When I Was the Greatest, The Boy in the Black Suit, All American Boys (cowritten with Brendan Kiely), As Brave as You, For Every One, the Track series (Ghost, Patina, Sunny, and Lu), Look Both Ways, and Long Way Down, which received a Newbery Honor, a Printz Honor, and a Coretta Scott King Honor. He lives in Washington, DC. You can find his ramblings at JasonWritesBooks.com.

The Death of Vivek Oji: A Novel (Hardcover)

ISBN: 9780525647072
Availability: Not In Store - Available to special order for pickup or ship. For even speediest shipping we suggest our Bookshop.org page!
Published: Make Me a World - September 10th, 2019

Look Both Ways: A Tale Told in Ten Blocks (Hardcover)

ISBN: 9781481438285
Availability: Not In Store - Available to special order for pickup or ship. For even speediest shipping we suggest our Bookshop.org page!
Published: Atheneum/Caitlyn Dlouhy Books - October 8th, 2019