Alyssa Cole and Beverly Jenkins for When No One Is Watching 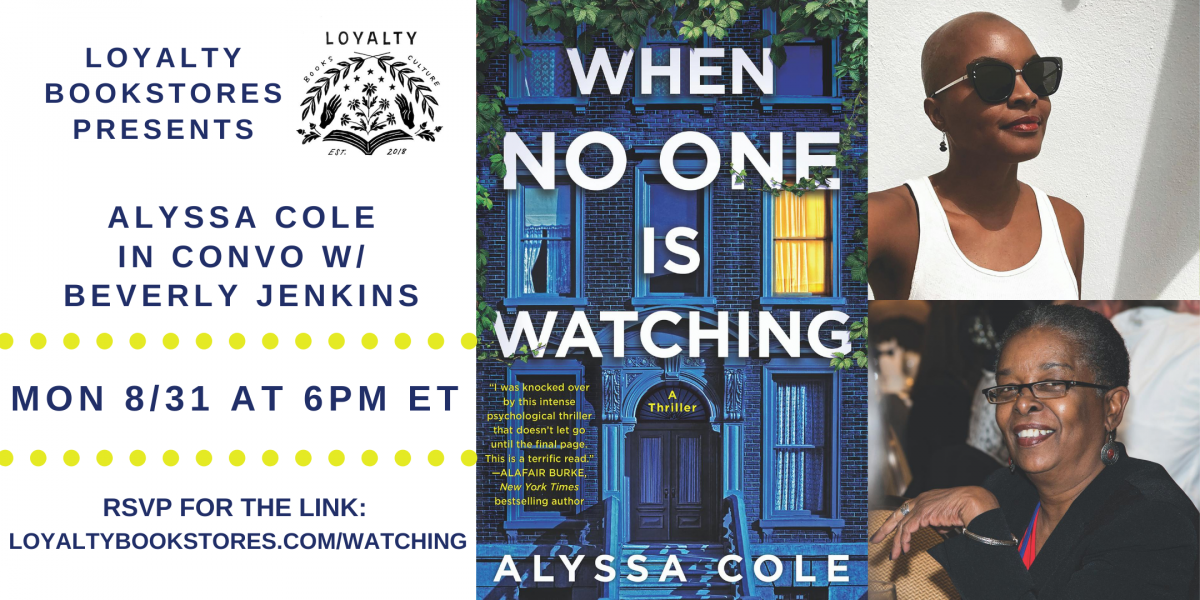 When No One is Watching is one of THE most anticipated books of 2020 and we are beyond thrilled to host a celebration and conversation between author Alyssa Cole and Beverly Jenkins!! This event will be held digitally via Crowdcast. Click here to register for the event with a donation of any amount of your choice. Donations will go to Black Lives Matter DC. You can pre-order the book below and there will also be an option to buy the book during the event.

Rear Window meets Get Out in this gripping thriller from a critically acclaimed and New York Times Notable author, in which the gentrification of a Brooklyn neighborhood takes on a sinister new meaning…

Sydney Green is Brooklyn born and raised, but the neighborhood she loves is being erased before her very eyes. FOR SALE signs are popping up everywhere, and the neighbors she’s known all her life are disappearing. To preserve the past, Sydney channels her frustration into a walking tour: “Displaced: A People’s History of Brooklyn,” and finds an unlikely and unwanted assistant in one of the new arrivals to the block – her neighbor Theo.

But Sydney and Theo’s deep dive into history quickly becomes a dizzying descent into paranoia and fear. Their neighbors may not have moved to the suburbs after all, and the efforts to revitalize the community may be more deadly than advertised.

When does coincidence become conspiracy? Where do people go when gentrification pushes them out? Can Sydney and Theo trust each other – or themselves – long enough to find out, before they too disappear – permanently?

Alyssa Cole is an award-winning author of historical, contemporary, and sci-fi romance. Her contemporary rom-com A Princess in Theory was one of the New York Times’ 100 Notable Books of 2018, and her books have received critical acclaim from Library Journal, BuzzFeed, Kirkus Reviews, Booklist, Jezebel, Vulture, Book Riot, Entertainment Weekly, and various other outlets. When she’s not working, she can usually be found watching anime or wrangling her many pets.

Beverly Jenkins is the recipient of the 2018 Michigan Author Award by the Michigan Library Association, the 2017 Romance Writers of America Nora Roberts Lifetime Achievement Award, as well as the 2016 Romantic Times Reviewers’ Choice Award for historical romance. She has been nominated for the NAACP Image Award in Literature, was featured in both the documentary Love Between the Covers and on CBS Sunday Morning. Since the publication of Night Song in 1994, she has been leading the charge for multicultural romance, and has been a constant darling of reviewers, fans, and her peers alike, garnering accolades for her work from the likes of The Wall Street Journal, People Magazine, and NPR.

On the Corner of Hope and Main: A Blessings Novel (Paperback)