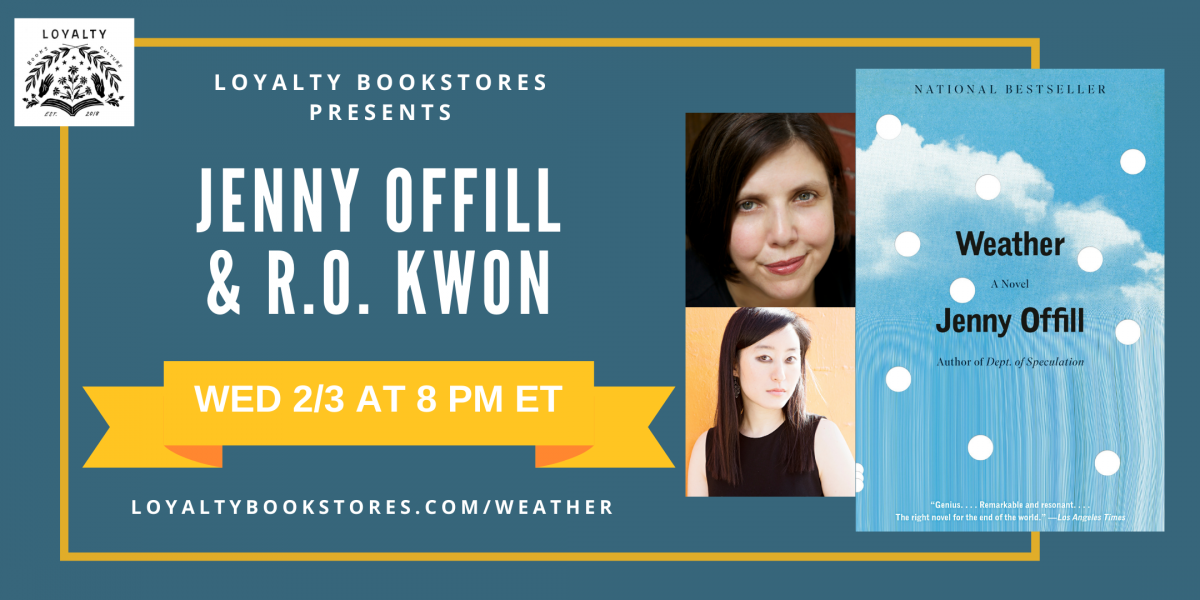 We're celebrating the paperback release of Weather with Jenny Offill in conversation with R.O. Kwon! Both of these talented authors are Loyalty faves so we are super psyched! This event will be held digitally via Crowdcast. Click here to register for the event with a donation of any amount of your choice. Donations will go to Black Lives Matter DC. You can order the book on our website and there will also be an option to buy the book during the event.

From the beloved author of the nationwide best seller Dept. of Speculation--one of the New York Times Book Review's Ten Best Books of the Year--a "darkly funny and urgent" (NPR) tour de force about a family, and a nation, in crisis.

Lizzie works in the library of a university where she was once a promising graduate student. Her side hustle is answering the letters that come in to Hell and High Water, the doom-laden podcast hosted by her former mentor. At first it suits her, this chance to practice her other calling as an unofficial shrink--she has always played this role to her divorced mother and brother recovering from addiction--but soon Lizzie finds herself struggling to strike the obligatory note of hope in her responses. The reassuring rhythms of her life as a wife and mother begin to falter as her obsession with disaster psychology and people preparing for the end of the world grows. A marvelous feat of compression, a mix of great feeling and wry humor, Weather is an electrifying encounter with one of the most gifted writers at work today.

Jenny Offill is the author of the novels Last Things (a New York Times Notable Book of the Year and a finalist for the L.A. Times First Book Award); Dept. of Speculation, which was shortlisted for the Folio Prize, the Pen Faulkner Award and the International Dublin Award; and most recently Weather, an instant New York Times Bestseller. She lives in upstate New York and teaches at Syracuse University and in the low residency program at Queens University.

R.O. Kwon’s nationally bestselling first novel, The Incendiaries, was named a best book of the year by over forty publications and is being translated into seven languages. She coedited the anthology Kink, forthcoming in 2021. Kwon's writing is published in the New York Times, The Guardian, The Paris Review, NPR, and elsewhere.

The Incendiaries: A Novel (Paperback)