Vanessa Riley and Denny S. Bryce for MURDER IN WESTMINSTER and IN THE FACE OF THE SUN 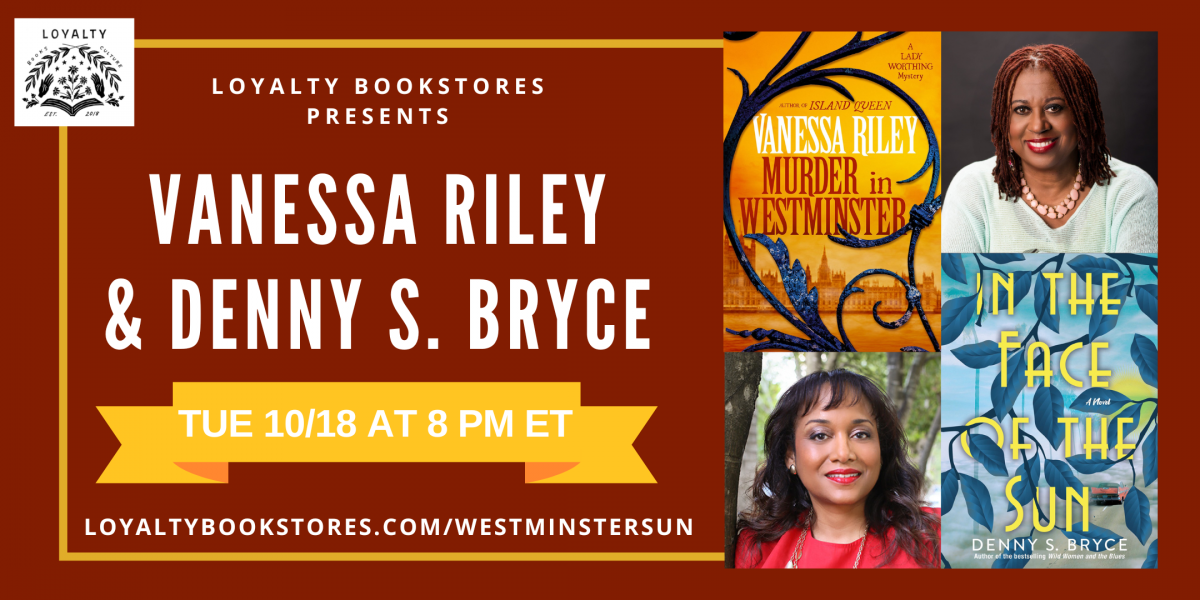 Loyalty is delighted to host Vanessa Riley and Denny S. Bryce for a virtual celebration of their latest releases, Murder in Westminster and In the Face of the Sun! This event will be held digitally via Crowdcast. Click here to register for the event with a donation of any amount of your choice. You can also order the book below to be automatically added to the event's registration list. Donations will go to the Trans Women of Color Collective. There will also be an option to snag the book during the event.

ABOUT MURDER IN WESTMINSTER

The first in a vibrant, inclusive new historical mystery series by acclaimed author Vanessa Riley portrays the true diversity of the Regency-era, as an aristocrat whose skin color and notorious family history have left her with few friends she can rely on – just as the local vicar names her the prime suspect in a murder case…

Discovering a body on her property presents Lady Abigail Worthing with more than one pressing problem. The victim is Juliet, the wife of her neighbor, Stapleton Henderson. Although Abigail has little connection with the lady in question, she expects to be under suspicion. Abigail’s skin color and her mother’s notorious past have earned her a certain reputation among the ton, and no amount of wealth or status will eclipse it.

Abigail can’t divulge that she was attending a secret pro-abolition meeting at the time of the murder. To her surprise, Henderson offers her an alibi. Though he and Juliet were long estranged, and she had a string of lovers, he feels a certain loyalty to his late wife. Perhaps together, he and Abigail can learn the truth.

Abigail, whose marriage to Lord Worthing was not a love match, knows well how appearances can deceive. For all its surface elegance, London’s high society can be treacherous. Yet who in their circle would have killed Juliet, and why? Taking the reins of her life in a way she never has before, Abby intends to find out—but in the process she will uncover more danger than she ever imagined . . .

ABOUT IN THE FACE OF THE SUN

In this haunting novel, the author of Wild Women and the Blues weaves together two stories as they unfold decades apart, as a woman on the run from an abusive husband joins her intrepid aunt as they head across the country from Chicago to Los Angeles, and confront a painful and shadowy past that has reverberated across generations.

“Bryce excels at placing readers in a glamorous time and place…riveting and vibrant.” – Booklist

1928, Los Angeles: The newly-built Hotel Somerville is the hotspot for the city's glittering African-American elite. It embodies prosperity and dreams of equality for all—especially Daisy Washington. An up-and-coming journalist, Daisy anonymously chronicles fierce activism and behind-the-scenes Hollywood scandals in order to save her family from poverty. But power in the City of Angels is also fueled by racism, greed, and betrayal. And even the most determined young woman can play too many secrets too far . . .

1968, Chicago: For Frankie Saunders, fleeing across America is her only escape from an abusive husband. But her rescuer is her reckless, profane Aunt Daisy, still reeling from her own shattered past. Frankie doesn't want to know what her aunt is up to so long as Daisy can get her to LA—and safety. But Frankie finds there’s no hiding from long-held secrets—or her own surprising strength.

Daisy will do whatever it takes to settle old scores and resolve the past—no matter the damage. And Frankie will come up against hard choices in the face of unexpected passion. Both must come to grips with what they need, what they’ve left behind—and all that lies ahead . . .

Vanessa Riley is an award-winning author of historical romance, mystery, and fiction novels featuring realistic multicultural communities and powerful persons of color. To fuel her interest in the Regency and early-Victorian eras, she made time for attending renaissance fairs and consuming period novels and films while obtaining her Ph.D. in mechanical engineering and a master’s in industrial engineering and engineering management from Stanford University, as well as a BS and MS in mechanical engineering from Penn State University. A frequent speaker at literary, women's, and STEM events, she lives in Atlanta, Georgia with her military husband and teenage kid.

Denny S. Bryce is the award-winning author of historical fiction novels including Wild Women and the Blues and In the Face of the Sun. A former professional dancer and public relations professional, she now is an adjunct professor in the MFA program at Drexel University, a book critic for NPR, and a freelance writer whose work has been published in USA Today, Harper’s Bazaar, and FROLIC Media. She is a member of the Historical Novel Society, Women’s Fiction Writers Association, and Tall Poppy Writers. Originally from Chicago, she now resides in Savannah, Georgia and can be found online at DennySBryce.com.

In the Face of the Sun: A Fascinating Novel of Historical Fiction Perfect for Book Clubs (Paperback)

A Duke, the Spy, an Artist, and a Lie (Rogues and Remarkable Women #3) (Paperback)

An Earl, the Girl, and a Toddler: A Remarkable and Groundbreaking Multi-Cultural Regency Romance Novel (Rogues and Remarkable Women #2) (Paperback)

A Duke, the Lady, and a Baby: A Multi-Cultural Historical Regency Romance (Rogues and Remarkable Women #1) (Paperback)

Wild Women and the Blues: A Fascinating and Innovative Novel of Historical Fiction (Paperback)