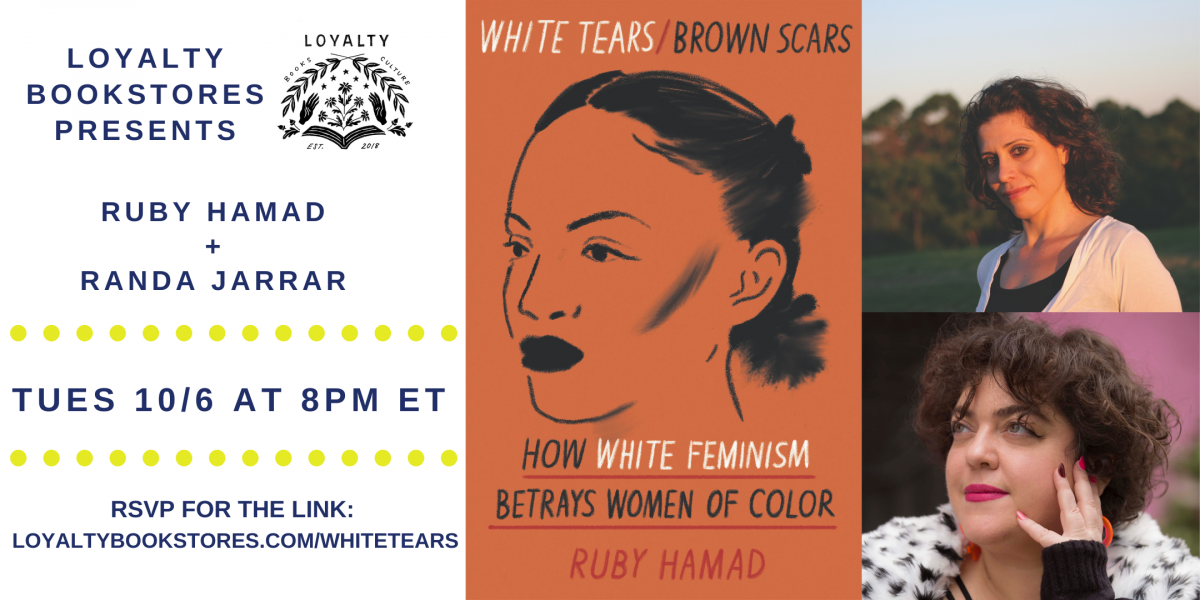 Celebrate the release of White Tears/Brown Scars with author Ruby Hamad and Randa Jarrar in what is sure to be a brilliant event! This event will be held digitally via Crowdcast. Click here to register for the event with a donation of any amount of your choice. Donations will go to Black Lives Matter DC. You can pre-order the book below and there will also be an option to buy the book during the event.

Called “powerful and provocative" by Dr. Ibram X. Kendi, author of the New York Times bestselling How to be an Antiracist, this explosive book of history and cultural criticism reveals how white feminism has been used as a weapon of white supremacy and patriarchy deployed against Black and Indigenous women, and women of color.

Taking us from the slave era, when white women fought in court to keep “ownership” of their slaves, through the centuries of colonialism, when they offered a soft face for brutal tactics, to the modern workplace, White Tears/Brown Scars tells a charged story of white women’s active participation in campaigns of oppression. It offers a long overdue validation of the experiences of women of color.

Discussing subjects as varied as The Hunger Games, Alexandria Ocasio-Cortez, the viral BBQ Becky video, and 19th century lynchings of Mexicans in the American Southwest, Ruby Hamad undertakes a new investigation of gender and race. She shows how the division between innocent white women and racialized, sexualized women of color was created, and why this division is crucial to confront.

Along the way, there are revelatory responses to questions like: Why are white men not troubled by sexual assault on women? (See Christine Blasey Ford.) With rigor and precision, Hamad builds a powerful argument about the legacy of white superiority that we are socialized within, a reality that we must apprehend in order to fight.

Ruby Hamad is a journalist, author, and academic completing a Ph.D. in media studies at UNSW (Australia). Her Guardian article, ‘How White Women Use Strategic Tears to Silence Women of Color,’ became a global flashpoint for discussions of white feminism and racism and inspired her debut book, White Tears/Brown Scars, which has received critical acclaim in her home country of Australia. Her writing has also featured in Prospect Magazine, The New Arab, and more. She splits her time between Sydney and New York.

RANDA JARRAR is the author of the novel A Map of Home and the collection of stories Him, Me, Muhammad Ali. Her work has appeared in The New York Times Magazine, Salon, Bitch, BuzzFeed, and elsewhere. She is a recipient of a Creative Capital Award and an American Book Award, as well as awards and fellowships from the Civitella Ranieri Foundation, the Lannan Foundation, Hedgebrook, PEN, and others. A professor of creative writing and a performer, Jarrar lives in Los Angeles.

Love Is an Ex-Country (Hardcover)

Him, Me, Muhammad Ali (Paperback)