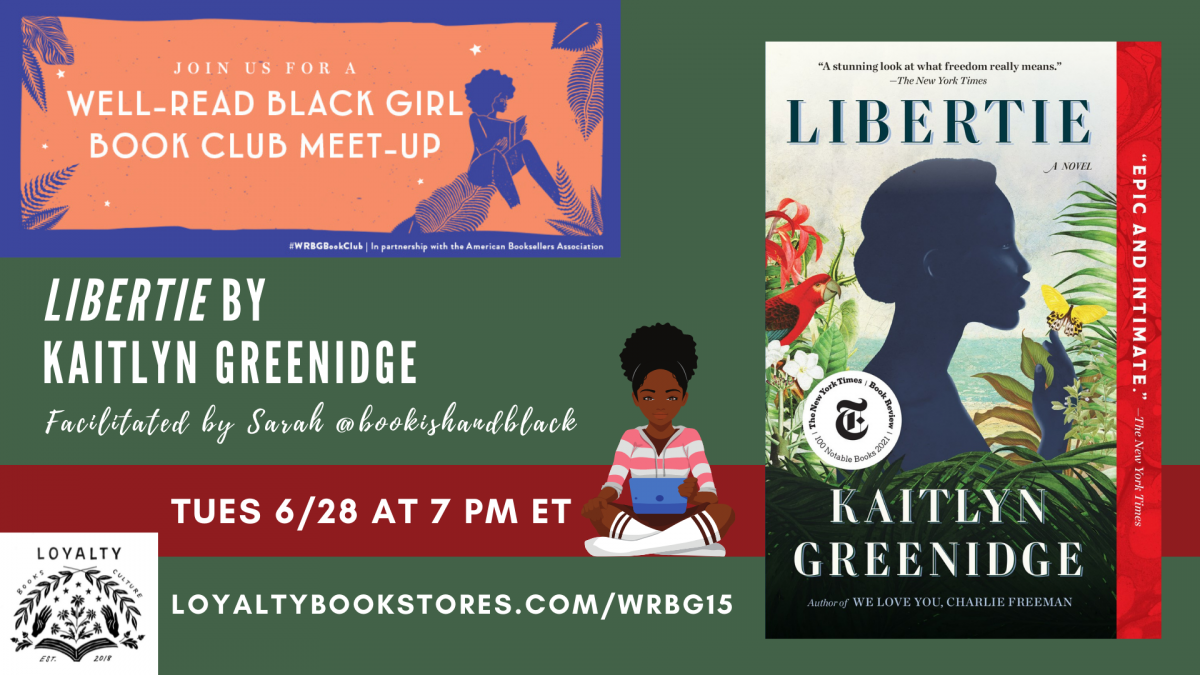 This month's Well-Read Black Girl book club chats about Libertie by Kaitlyn Greenidge, with Sarah @bookishandblack facilitating! While everyone is welcome to attend, this space is created to be a safe and centering space for Black Women readers. RSVP using the form below to get the Zoom link for this month's meeting! Please note WRBG book club will now be meeting at 7pm instead of 6pm ET.

“A stunning look at what freedom really means.” —The New York Times

Coming of age in a free Black community in Reconstruction-era Brooklyn, Libertie Sampson is all too aware that her mother, a physician, has a vision for their future together: Libertie is to go to medical school and practice alongside her. But Libertie is hungry for something else—is there really only one way to be independent? And she is constantly reminded that, unlike her light-skinned mother, she will not be able to pass for white. When a young man from Haiti proposes to Libertie and promises a better life on the island, she accepts, only to discover that she is still subordinate to him and all men. As she tries to parse what freedom actually means for a Black woman, Libertie struggles with where she might find it—for herself and for generations to come.

Inspired by the life of one of the first Black female doctors in the United States, critically acclaimed and Whiting Award–winning author Kaitlyn Greenidge returns with an unforgettable and immersive novel that will resonate with readers eager to understand our present through a deep, moving, and lyrical dive into our past.

Kaitlyn Greenidge's debut novel, We Love You, Charlie Freeman, was one of the New York Times Critics’ Top 10 Books of 2016 and a finalist for the Center for Fiction First Novel Prize. She is a contributing writer for the New York Times and the features director at Harper's Bazaar, and her writing has also appeared in Vogue, Glamour, the Wall Street Journal, and elsewhere. She is the recipient of a Hodder Fellowship from Princeton University's Lewis Center for the Arts, as well as fellowships from the Guggenheim Foundation, the Whiting Foundation, the National Endowment for the Arts, Substack, and the Radcliffe Institute for Advanced Study.