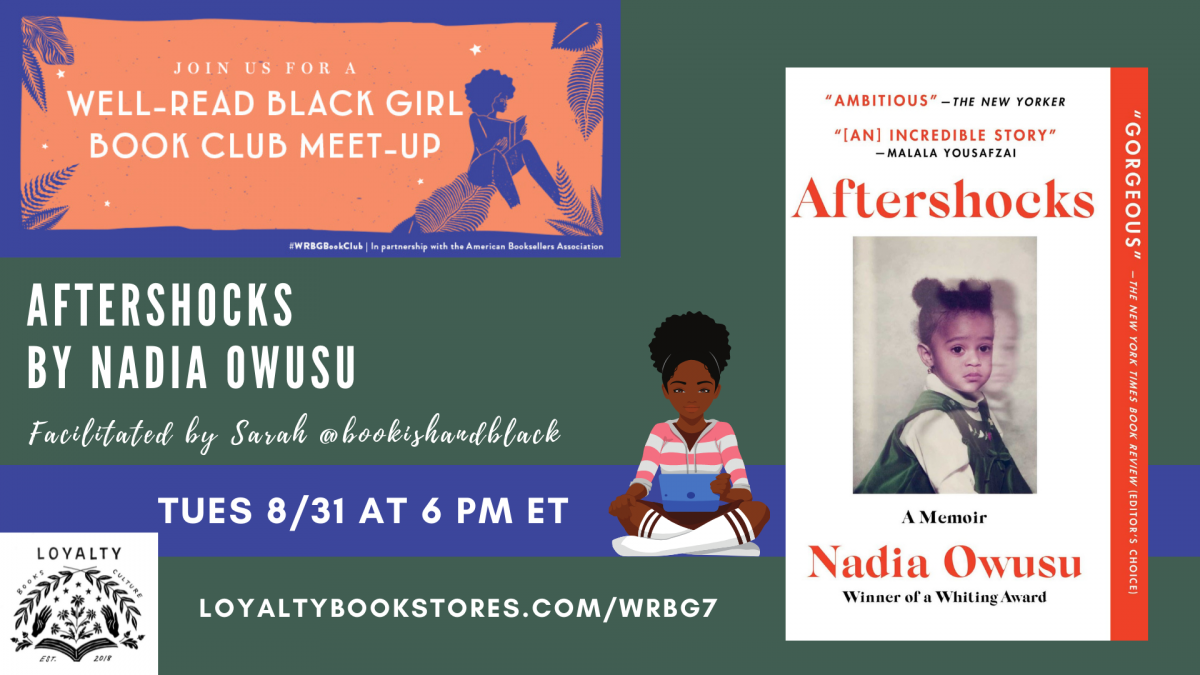 This month's Well-Read Black Girl book club chats about Aftershocks by Nadia Owusu! We're so excited to welcome Sarah @bookishandblack as our new host for WRBG. Please note Well-Read Black Girl book club will be meeting on the last Tuesday of the month at 6pm ET moving forward. While everyone is welcomed to attend, this space is created to be a safe and centering space for Black Women readers. RSVP below to get the zoom link.

The Well-Read Black Girl Book Club is a national book club started by Glory Edim that now has additional meetups hosted by Indie Bookstores around the US. This book club centers Black women, their stories, voices, and experiences. While everyone is welcomed to attend, this space is created to be a safe and centering space for Black Women readers. The club reads a variety of genres, classics, new literature and nonfiction, and YA that covers the breadth of experience from the Black American and African diaspora. Loyalty's club often reads along with the national club recs and sometimes reads local area authors from Chocolate City. We often feature selections from the Well-Read Black Girl Anthology as well.

In the tradition of The Glass Castle, this “gorgeous” (The New York Times, Editors’ Choice) and deeply felt memoir from Whiting Award winner Nadia Owusu tells the “incredible story” (Malala Yousafzai) about the push and pull of belonging, the seismic emotional toll of family secrets, and the heart it takes to pull through.

“In Aftershocks, Nadia Owusu tells the incredible story of her young life. How does a girl—abandoned by her mother at age two and orphaned at thirteen when her beloved father dies—find her place in the world? This memoir is the story of Nadia creating her own solid ground across countries and continents. I know the struggle of rebuilding your life in an unfamiliar place. While some of you might be familiar with that and some might not, I hope you’ll take as much inspiration and hope from her story as I did.” —MALALA YOUSAFZAI

​ONE OF THE BEST BOOKS OF 2021 SELECTED BY VULTURE AND TIME MAGAZINE!

Young Nadia Owusu followed her father, a United Nations official, from Europe to Africa and back again. Just as she and her family settled into a new home, her father would tell them it was time to say their goodbyes. The instability wrought by Nadia’s nomadic childhood was deepened by family secrets and fractures, both lived and inherited. Her Armenian American mother, who abandoned Nadia when she was two, would periodically reappear, only to vanish again. Her father, a Ghanaian, the great hero of her life, died when she was thirteen. After his passing, Nadia’s stepmother weighed her down with a revelation that was either a bombshell secret or a lie, rife with shaming innuendo.

With these and other ruptures, Nadia arrived in New York as a young woman feeling stateless, motherless, and uncertain about her future, yet eager to find her own identity. What followed, however, were periods of depression in which she struggled to hold herself and her siblings together.

“A magnificent, complex assessment of selfhood and why it matters” (Elle), Aftershocks depicts the way she hauled herself from the wreckage of her life’s perpetual quaking, the means by which she has finally come to understand that the only ground firm enough to count on is the one written into existence by her own hand.

“Full of narrative risk and untrammeled lyricism” (The Washington Post), Aftershocks joins the likes of Don’t Let’s Go to the Dogs Tonight and William Styron’s Darkness Visible, and does for race identity what Maggie Nelson does for gender identity in The Argonauts.

Nadia Owusu is a Brooklyn-based writer and urban planner. She is the recipient of a 2019 Whiting Award. Her lyric essay So Devilish a Fire won the Atlas Review chapbook contest. Her writing has appeared or is forthcoming in the New York Times, the Wall Street Journal, Granta, the Guardian, Bon Appétit, Electric Literature, The Paris Review Daily, and Catapult. Aftershocks is her first book.