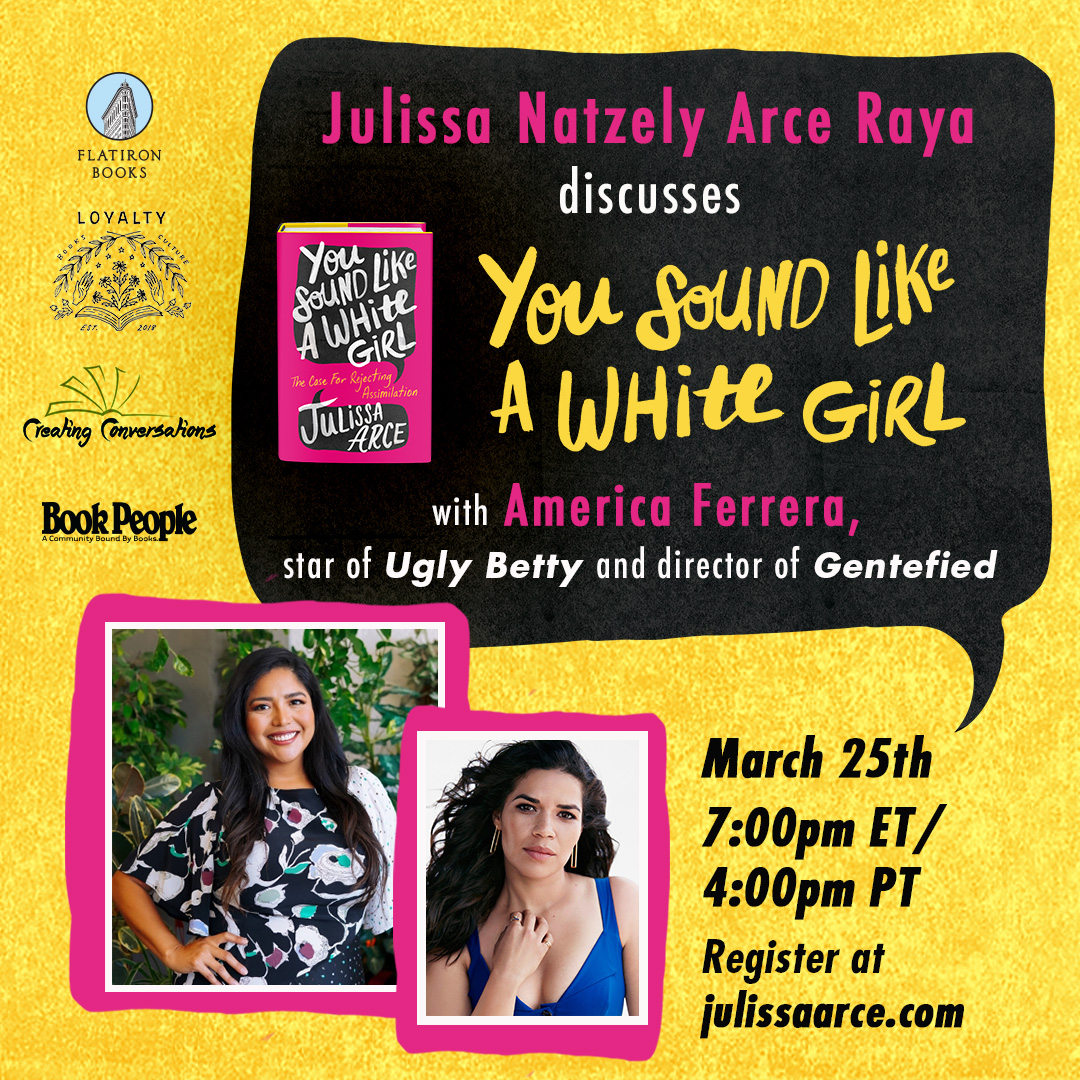 Join Julissa Natzely Arce Raya, in conversation with America Ferrera, to celebrate the launch of her new book, You Sound Like a White Girl: The Case for Rejecting Assimilation! Loyalty is thrilled to be one of the bookstore partners along with Creating Conversations and BookPeople, with Flatiron Books hosting! This event is free to attend and will be held digitally via Zoom. Click here to register for the event! Snag a copy of the book below to get a signed copy (while supplies last)!

Bestselling author Julissa Arce brings readers a powerful polemic against the myth that assimilation leads to happiness and belonging for immigrants in America. Instead, she calls for a celebration of our uniqueness, our origins, our heritage, and the beauty of the differences that make us Americans.

“You sound like a white girl.” These were the words spoken to Julissa by a high school crush as she struggled to find her place in America. As a brown immigrant from Mexico, assimilation had been demanded of her since the moment she set foot in San Antonio, Texas, in 1994. She’d spent so much time getting rid of her accent so no one could tell English was her second language that in that moment she felt those words—you sound like a white girl?—were a compliment. As a child, she didn’t yet understand that assimilating to “American” culture really meant imitating “white” America—that sounding like a white girl was a racist idea meant to tame her, change her, and make her small. She ran the race, completing each stage, but never quite fit in, until she stopped running altogether.

In this dual polemic and manifesto, Julissa dives into and tears apart the lie that assimilation leads to belonging. She combs through history and her own story to break down this myth, arguing that assimilation is a moving finish line designed to keep Black and brown Americans and immigrants chasing racist American ideals. She talks about the Lie of Success, the Lie of Legality, the Lie of Whiteness, and the Lie of English—each promising that if you obtain these things, you will reach acceptance and won’t be an outsider anymore. Julissa deftly argues that these demands leave her and those like her in a purgatory—neither able to secure the power and belonging within whiteness nor find it in the community and cultures whiteness demands immigrants and people of color leave behind.

In You Sound Like a White Girl, Julissa offers a bold new promise: Belonging only comes through celebrating yourself, your history, your culture, and everything that makes you uniquely you. Only in turning away from the white gaze can we truly make America beautiful. An America where difference is celebrated, heritage is shared and embraced, and belonging is for everyone. Through unearthing veiled history and reclaiming her own identity, Julissa shows us how to do this.

“A love letter to our people—full of fury and passion."
— José Olivarez, award-winning poet and author of Citizen Illegal

"If you could take Rodolfo Gonzales epic poem 'I Am Joaquin' and explain it through compelling, personal narrative in twenty-first century America, You Sound Like A White Girl would be it.”
— Joaquin Castro

Julissa Arce is a nationally recognized author, sought-after speaker, producer, and social changemaker. She is the best-selling author of My (Underground) American Dream and Someone Like Me. Arce is a Crooked media contributor and a frequent writer for TIME Magazine, and has provided political commentary across numerous TV networks including NBC News, Bloomberg TV, CNN, and MSNBC. She is the cofounder of the Ascend Educational Fund, a college scholarship and mentorship program for immigrant students regardless of their immigration status. She lives in Los Angeles with her family.

America Ferrera is an award-winning actress, producer, director and activist. Ferrera is best known for her breakthrough role as Betty Suarez on ABC’s hit comedy, Ugly Betty, for which she won Golden Globe, Emmy, Screen Actors Guild, ALMA, and Imagen Awards. She produces and stars in the acclaimed NBC workplace comedy, Superstore, currently in its fourth season. In 2016 Ferrera cofounded HARNESS, an organization connecting storytellers and activists to amplify the cultural narrative around social justice. She speaks throughout the country as an advocate for human and civil rights and was the opening speaker at the monumental Women’s March on Washington in January 2017. Ferrera resides in New York and Los Angeles with her husband Ryan, their son Sebastian, and their two golden retrievers.

You Sound Like a White Girl: The Case for Rejecting Assimilation (Hardcover)

American Like Me: Reflections on Life Between Cultures (Paperback)